END_OF_DOCUMENT_TOKEN_TO_BE_REPLACED " /> Automobile Comparison: Lexus IS 350c vs. BMW 328i vs. Volvo C70 vs. Infiniti G37 Convertible | Lexus Enthusiast
Menu
Log in
Register
You are using an out of date browser. It may not display this or other websites correctly.
You should upgrade or use an alternative browser. 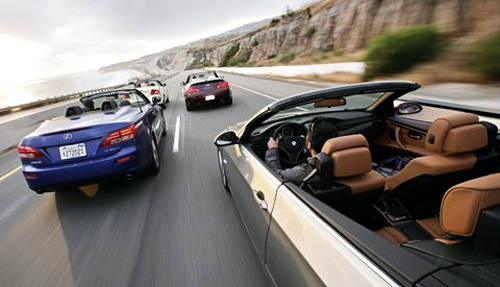 As part of their Great Drives issue, Automobile Magazine has a convertible comparison pitting the Lexus IS 350c against the Infiniti G37, BMW 328i and Volvo C70 in Laguna Beach, California. Ultimately, no winner is given, but the IS 350c was named first among equals:

Although Infiniti tries to channel BMW’s sporting heritage, Lexus favors the luxury end of the spectrum. The IS350C features the most sumptuous interior in its class….By all of the measures that matter most to prospective owners, the Lexus was very good, and it offers a winning compromise of style, performance, and utility.

With no clear winner, this could be considered a rather weak comparison, when in fact it’s a very clear overview of the differences between competitors. By all accounts, the IS-C had a very good showing, which is very nice to see in its first-ever comparison (to my knowledge).

(One other thing I noticed is how much better the IS convertible design looks when placed among its peers—it provides some much needed context.)