END_OF_DOCUMENT_TOKEN_TO_BE_REPLACED " /> Two Tuned Lexus Models from the Upcoming SEMA 2007 | Lexus Enthusiast
Menu
Log in
Register
You are using an out of date browser. It may not display this or other websites correctly.
You should upgrade or use an alternative browser.

As previously mentioned, this year’s SEMA event will showcase nine Lexus models tuned up by aftermarket companies. Most of these companies make little or no mention of this fact on their websites, but two of the tuners have put up some teaser images:

The Blitz GS hasn’t gone over the top with external modification, there’s a front lip spoiler and side steps, and more than likely a rear lip spoiler, but I imagine most of their entry is going to be under the hood. Surprisingly, I like the gold rims. 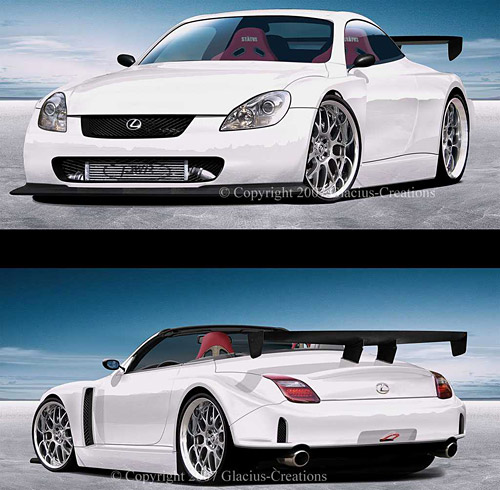 The BRS Autodesign SC, however, is completely kitted over, including giant vented front fenders, a fat front lip spoiler, huge wheels, massive side steps and an enormous rear trunk spoiler. I love this one from the front, but the lack of rear under-spoiler ruins it.