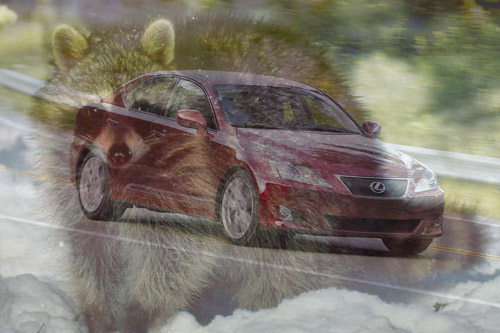 It’s a unique circumstance to destroy your engine after hitting a raccoon, but that’s what happened to Nathan Pitzel in his brand new IS 350:

While driving through Texas a raccoon ran right in front of my car. It was the middle of the night 100 miles outside of Amarillo @ 1:30am, at first I felt horrible about killing the raccoon. However, when all the emergency lights on my dash lit-up my train of thought quickly changed to what am I going to do.

When I talked to him [Greg @ Alderson Lexus] explained to me that my engine was fried and that I’d need a new one. Shocked of course, I asked him for further details. He went on to tell me that the bad news is not so much that I need a new engine, but that there are no new Lexus engines in the US. And, that Lexus will have to build one which means my car won’t be ready for 5-8 months. WHAT! 5-8 months, that is INSANE!  I thanked him and immediately called Progressive.

Progressive pretty much reiterated what Greg had told me and said that their hands were tied.

Certainly not a situation anyone would want to be in, Nathan is definitely between a rock (Lexus) and a hard place (Progressive Insurance).

While he feels Lexus is mostly at fault (take a look at his domain name), it’s his insurance company that he should be looking to for compensation. It’s true that the dealership should have been more cognizant of his situation, but isn’t it the insurance company who handles your accident claim? If it takes so long to fix the car, shouldn’t it be just be written off?

Still, you have to wonder how hitting a raccoon could total the engine — regardless, you have to feel for the guy. It’s a no-win situation that will probably get worse before it gets better.