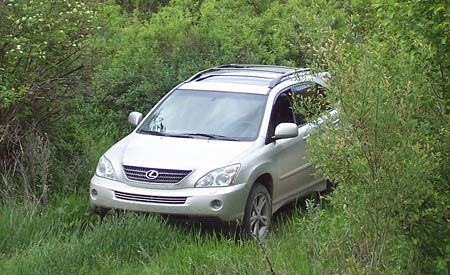 Easily, my favorite car magazine feature is the long-term test, where the magazines various writers and editors spend twelve months behind the wheel of a car then share the results.

Well, not satisfied with a single year, Car & Driver enjoyed a two year-long visit with the RX 400h. The magazine’s staff managed to put 40,000 miles on the SUV in that time, which gave them plenty of road to find out all of the vehicle’s low points:

To many drivers the transition from purely electric to gas and electric power wasn’t always smooth, and the amount of added power delivered was unpredictable. Many also felt a lurch and heard a clunking sound when the gas engine kicked in when the vehicle was at a complete stop. Most drivers thought that a $50,000 Lexus should behave more smoothly.

The regenerative braking system got gripes, too. The transition from regenerative to hydraulic braking was often disconcerting because a small increase in pressure on the brake pedal might produce a huge increase in deceleration. Drivers complained that when they began to press lightly on the brake pedal, the RX seemed to surge a bit, causing the knee-jerk reaction of applying more braking than intended. This was especially apparent in city driving at moderate to low speeds. All the Lexus service guys could do was tell us, “That’s just the way they work.”

These issues, along with the rather obligatory cost breakdown of a hybrid versus its traditional engine counterpart (it would take 91,000 miles before the 400h would justify its $3,800 premium over the RX 350), doesn’t really build a strong case for the hybrid. Unless you’re feeling incredibly guilty about your carbon output, stick with the RX 350.