This guy is having orgasm.

Qué Auto Compro received a record 3 press vehicles to evaluate at the same time. Besides the Honda Civic Si HPT currently in the editor-in-chief's possession and the Buick Encore GX that @mmcartalk and I have discussed in our Garage forum, this just arrived at my front door:

Lexus will be missing one press car manana.

While we're at it

@Joaquin Ruhi , it would be an awesome article if you and @mikeavelli managed to photo shoot them together, they even have the same color! It's almost like destiny!

We reveal prices for the all-new LC 500 Convertible and confirm pricing for all variants of the new 2021 model year version of our LC Coupe.
blog.lexus.co.uk

We can clearly see there isn't a hybrid version for the LC convertible, most probably due to chassis reinforcement:

And required space for the top to fold down:

This being said, Lexus is pushing it really hard (marketing wise) to sell it as making all the perfect sound:

"The interior body structure has optimal placement and shape of braces to yield high dynamic performance faithful to the driver's intentions. And thanks to the car's robust and sensual sounding V8, the LC 500 Convertible accelerates in a pleasantly linear manner." 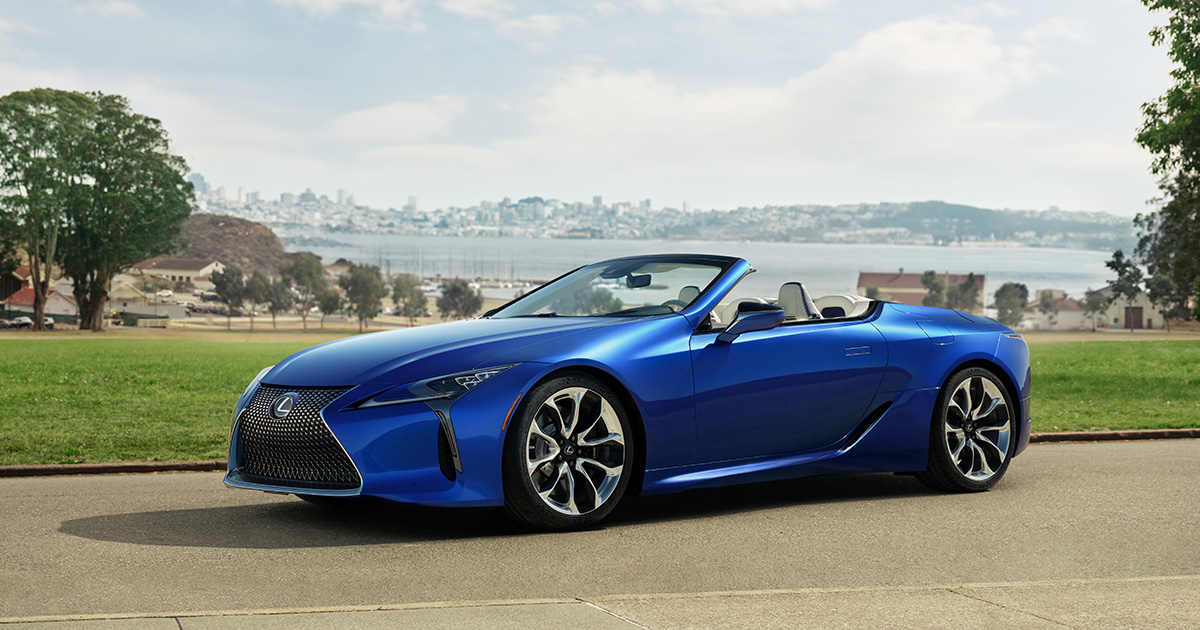 The much-anticipated convertible version of the Lexus LC 500 flagship coupe made its global debut today in Los Angeles. The LC 500 Convertible will be on display at the 2019 Los Angeles Auto Show, which runs from November 18 to December 1, 2019.

Sound management techniques were adopted from the LFA.
blog.lexus.co.uk

Even the first ad, it clearly wants to show the engine note when you put the top down:


This being said, in my opinion:

So, in conclusion, I really think for the facelift (due to next year) will bring a new V8 in different states of tune, to keep LC going and to power LF-1 / LX.
Last edited: Aug 26, 2020
L

Why didn't the facelifted LS get it?

I don't it is a matter of what Lexus WANTS to do. It is a matter of what the CAFE emissions standards etc. are forcing the industry to do. If Lexus allows 2UR engine to continue then it will be very difficult for them to meet European emissions standards overall in terms of what is required. Especially, if RCF production ends in 2021, there will be even less of a business case to keep producing this engine in such small numbers since all of the R&D cost for the 2UR engine was absorbed during RCF development in 2013 - 2014.

That is why they would need to go with downsized turbo engines in order to avoid being left behind. I believe, if LC500 is going to continue in subsequent years, it will have a more powerful version of the 3.5 Liter V6 in the LS500. That is my prediction.

@Levi , and announce it before the postponed Nurburing 24h test? We officially know they wanted to test it "one last time".

When my day isn't going so well, the LC just makes me smile. It is one of the best cars on the road today.
M

For me also, that picture's green would be an awesome green. However, that picture has been modified in some way. In the video, it's clear they have a Nori Green LC. [I also checked to see if Lexus Canada had different colors, but it's the same palette]
I want to like the Nori Green, but I just cannot. I would absolutely love the picture's shade, but would need some tinted glasses to make it that way ...

It is gorgeous in person. Here is a short video I made

Why does the lc500 sound so much meaner than the rcf? Its the opposite of what it should be. The lc500 is an awesome luxury cruiser and the rcf is an m3 competitor. Nori is nice but I do think a deeper racing or forest green would be amazing. Ugh if only car seats could fit in the back...
M

Ismelllikepoop said:
Why does the lc500 sound so much meaner than the rcf? Its the opposite of what it should be. The lc500 is an awesome luxury cruiser and the rcf is an m3 competitor. Nori is nice but I do think a deeper racing or forest green would be amazing. Ugh if only car seats could fit in the back...
Click to expand...

Different acoustics... they nailed the LC... RC F still sounds good to me though
M