krew said:
We’re seeing the New World Order through the lens of Lexus right now — the GS shelved in favor of the ES, a $200k minivan, import tax engines, all geared to the Chinese market.

It’s a very different position for the North American consumer, but its one we will have to get used to. It’s hardly a hot take, but China is now the top-tier market for Lexus, with North America second.

(Even then, Europe is the primary market for the UX, and the US-centric release of the LC & LS both produced little in the way of sales.)
Click to expand...

With the UX and a rumored compact-size FWD sedan in the works this trend will continue.

I was thinking why the LS was not designed for ChDM before. But then LM come and realized the LS is now completely irrelevant for them so they didn't even bother.

BMW and Mercedes have been selling twice as much in China than in US for a while. Audi about 3 times as much in China. Lexus is just catching up. That's part of the reason why Germans are going hard on Turbo (RS5 with 2.9T engine remember?). Part of tax paid in China on cars is based on engine displacement. There is a huge difference between the tax on a 2.9L engine and a 3.1 engine. The market has already shifted that German now build cars primarily for Europeans and Chinese. North American customers, in general, prefer trucks. It's unlikely that we will see more sedans/coupes anytime soon.
S

Lexus China has announced that 74,847 vehicles have been sold in the year to date，include 25,022 hybrid vehicles .

Anyone know how to get model-by-model breakdown on chinese media outlets? It has been so hard to get those numbers since January.

The ES now consistently outsells the A6L and 5-Series L and only bested by the E-Class L, very impressive considering it's an import. (Audi is just a trainwreck due to the leukemia incident).

BTW they chose to launch the RXL in China with the mid-cycle refresh.
Last edited: Jun 3, 2019
S

Since 2005, Lexus has officially entered the Chinese market. After 14 years, Lexus China has finally achieved a cumulative sales of more than 1 million units in China.

Anyone know how to get model-by-model breakdown on chinese media outlets? It has been so hard to get those numbers since January.

The ES now consistently outsells the A6L and 5-Series L and only bested by the E-Class L, very impressive considering it's an import. (Audi is just a trainwreck due to the leukemia incident).

BTW they chose to launch the RXL in China with the mid-cycle refresh.
Click to expand...

Despite what people think, US and Chinese markets are in many ways similar... just like Russian market too.

Now Europe, completely different story and it will be always very hard for Lexus to compete really good there.
S

Lexus, propelled by crossovers and hybrids, is on a roll in China and outpacing the broader new-vehicle market with sales surging 31 percent to 109,933 in the first seven months.

In addition to a broad hybrid lineup, the gains have been driven by the ES sedan and the NX and RX crossovers, Lexus’ China office said, without revealing sales by model for the period.

Demand for Lexus hybrids totaled 37,518 through July, a rise of 43 percent from a year earlier.

Lexus entered China in 2005. Unlike Infiniti and Acura, Lexus does not build vehicles in China, yet it became the fifth-largest luxury brand in the country in 2018, after Audi, Mercedes-Benz, BMW and Cadillac.

The Japanese brand delivered 160,468 vehicles in China last year, an increase of 21 percent from a year earlier. 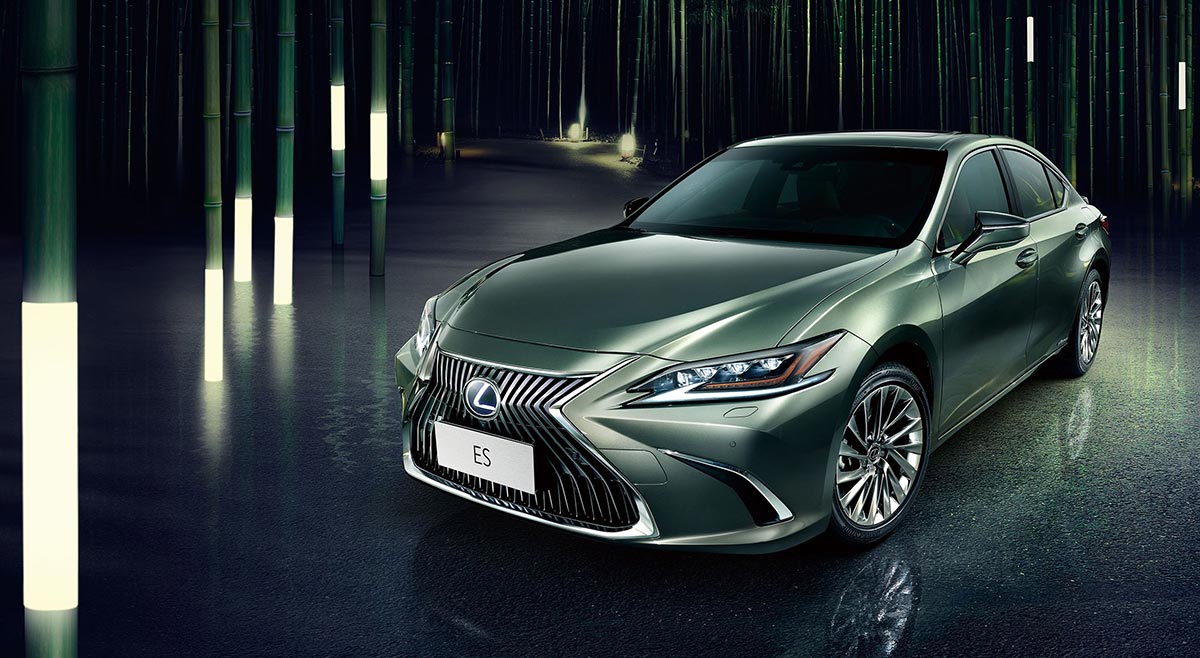 Lexus is outpacing the new-vehicle market in China, with sales surging 31% to 109,933 units sold in the first seven months of 2019. Lexus delivered 160,468 vehicles in China last year, an increase of 21% from a year earlier.
Gains have been driven by the ES, NX, and RX, though Lexus declined revealing sales by model. Demand for hybrid models has increased 43% over last year, and now account 34% of total sales.
Unlike competitors, Lexus does not build vehicles in China, but has still grown to be the fifth-largest luxury brand in the country in 2018, after Audi, Mercedes-Benz, BMW and Cadillac.
[Source: Automotive News]
Click to expand...

Luxuries - be they cars or handbags - are usually marketed as essentials of a desirable lifestyle and items that will make consumers seem appealing, successful and energetic if they buy them.

Toyota's premium arm Lexus, however, is hitting the soft spot of a growing number of middle-class customers in China by getting rid of the gimmicky stereotype.

"Buy a Lexus and you will remain the same you," said Kevin Chen, general manager of the marketing and communication division of Lexus China, in an interview this month.

Over the past years, Lexus is focusing more on building an unassuming image, believing things that are really precious and important are usually those people tend to take for granted.

The brand's aspiration for "thoughtful luxury" is what makes it unique, Chen said.

"We make you feel like you're taken care of because of all the craftsmanship and omotenashi," Chen said.

Omotenashi refers to a Japanese unique approach to hospitality, which roughly means offering the best service without the expectation of any reward in return.

Middle-class Chinese, who are young, well-educated and independent, are buying this philosophy.

Despite the downward pressure in China's automotive market, Lexus delivered 109,933 vehicles in the first seven months this year, up 31 percent year-on-year.

That's almost four times the average growth rate of premium vehicle brands in the country, according to statistics from the China Passenger Car Association.

Sales of its hybrids did even better, rising 43 percent year-on-year to 37,518 and accounting for more than one third of the brand's total deliveries in China.

The brand's ES sedan, one of its most popular models, has doubled its monthly sales since last year. Over 9,000 ES sedans have been sold in China each month since April.

Xu Lun, vice-president of Lexus China, said there are rarely discounts for models at its dealerships.

"Compared with sales figures, we are more concerned about the quality of our sales and customer satisfaction," Xu said.

"The results shows that customers are satisfied with our products and service."

In June, Lexus saw its total deliveries in the country since its arrival in 2005 reach 1 million.

"The results are attributed to one simple belief. No matter how the market changes, Lexus puts customers first, with attention to every detail, and exceeds their expectations," said Otake.

However, he called for caution despite the brand's growing momentum in China.

"When things are good, people may hope for sales will go further and further. But if we set unrealistic goals, it would be a dangerous thing," he said. "For me, the biggest challenge now is to make sure the quality of our development when we are in a good situation. We go step by step."

When Lexus LM enters China market, the sales number can skyrocket to a new all time high.
S

Ray99 said:
When Lexus LM enters China market, the sales number can skyrocket to a new all time high.
Click to expand...

The LM will be a $200,000 ultra luxury item that will sell a few thousands a year. When we said the demand for the Alphard is high it was in relative terms. It still just sold a little over 10,000 units a year; but that far overwhelms the production capacity thus the exorbitant prices.


Joaquin Ruhi said:
Over the past years, Lexus is focusing more on building an unassuming image, believing things that are really precious and important are usually those people tend to take for granted.

The brand's aspiration for "thoughtful luxury" is what makes it unique, Chen said.

"We make you feel like you're taken care of because of all the craftsmanship and omotenashi," Chen said.
Click to expand...

While traditionally Lexus has the image of 'unassuming luxury', their recent models with their aggressive design are less about that. Lexus has the youngest owners among all premium brands (average of only 34 years old, compared to over 50 for Mercedes and Cadillac) because the new models have more stand out design than boring BBAs. The IS in particular attracts lots of attention from first-time visitors to a dealer, but the lack of practicality forces lots of them to the NX, such a wasted opportunity.

It is very true that Lexus has been able to command premium for its quality. The ES still has at least 5% markups for a three month wait time and the wait time for MSRP is almost a year. The rest of the lineup usually only sells at MSRP with minor financing deals. The only heavily discounted models are the GS and LS (for obvious reasons). At the same time some competitors are struggling to sell their inventories even at 20% discounts (in the case of Volvo, JLR, and Lincoln). And BBA are plagued by quality issues and consumer complaints in recent years, forcing them to resort to hefty discounts as well. That's how it's possible to buy a M340i for almost the same price as a fully-loaded ES300h or NX300.
S

The march keeps on!

They are so supplied-strained in ChDM they have to raise prices, against everyone else who discount the heck out of their cars. If they want to keep the growth next year all they need to do is reverting back to original price.

These ES/NX200 owners are starting to get annoying though...
A

It seems back ordering has become a norm for Lexus in China for quite several models, ES and RX are the most note worthy ones with an average of 3month backorders. I’m wondering if it’s similar in the States right now and if Lexus is trying to resolve the issue by increasing production? They haven’t released any information about new plants other than the existing 5 yet.
You must log in or register to reply here.
Share:
Reddit Pinterest Tumblr WhatsApp Email Link
Top