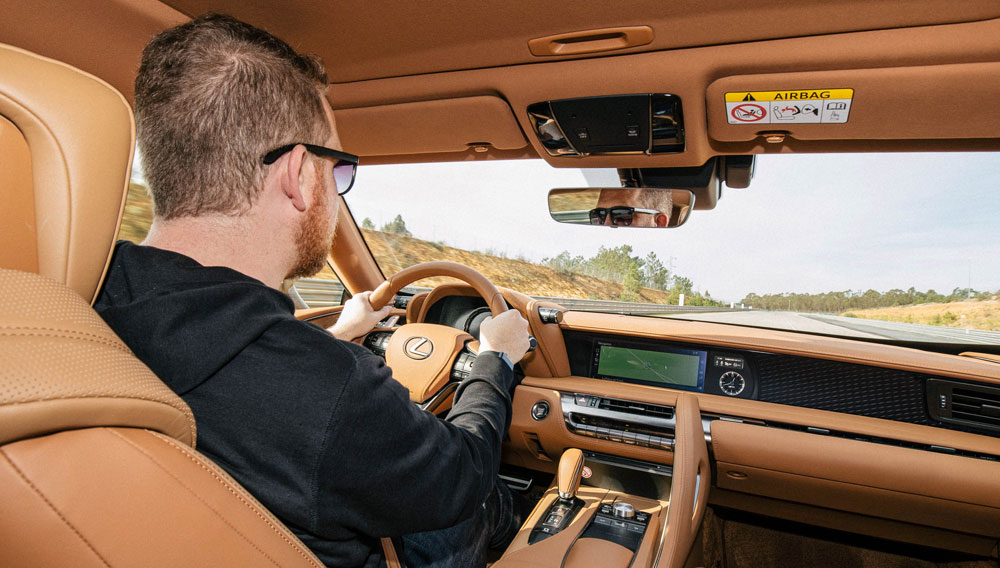 The night before first driving the all-new 2018 Lexus LC, I had dinner with Lexus master driver Yoshiaki Ito. Ito-san is one of just two people that shape the driving feel of every Lexus vehicle, and his expertise has played a key role in the development of the new LC coupe.

We talked about several things — our common CT 200h F SPORT daily driver, the deeper minutia of his job, there was some begging for a hot lap at the track the following day — but there was one moment in particular that stood out.

Ito-san explained that there have been three generations of Lexus driving dynamics, which I understood as such:

This idea sticks with me the next day, when bright and early I set off through the backroads surrounding Seville, Spain, in an extremely vibrant Flare Yellow LC 500: 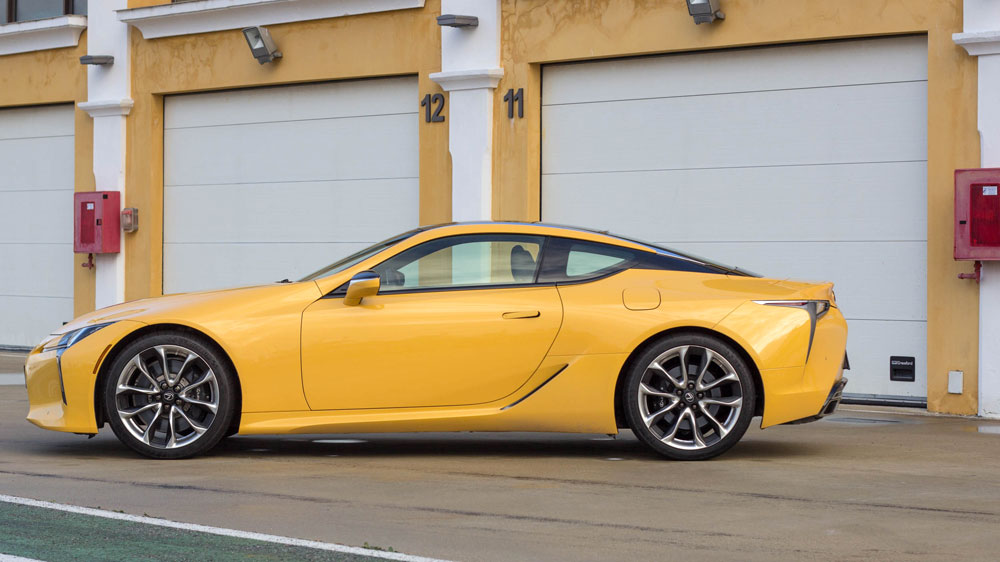 It’s there in an instant — the LC 500 is a step above every other vehicle in the (current) Lexus lineup. The steering is communicative, with every dip and strip of the road transmitted directly through the column and into my hands.

The 5.0L V8 is punchy and eager, ready to let loose at a moment’s notice — it takes effort to keep the speed under control. The exhaust, with its deep crackle and bark, is an expressive driving soundtrack, particularly with aggressive downshifts.

And yet, get to a comfortable speed and flip on the cruise control, and it’s pure Lexus through and through. Quiet, smooth, wonderfully composed — the LC has a depth of character that has me won over before we even reach the track.

Arriving at Circuito Monteblanco, a test circuit designed for driver development, I took some time to inspect the exterior. By this time, opinions are firmed up — either you like the current Lexus design language, or you don’t. 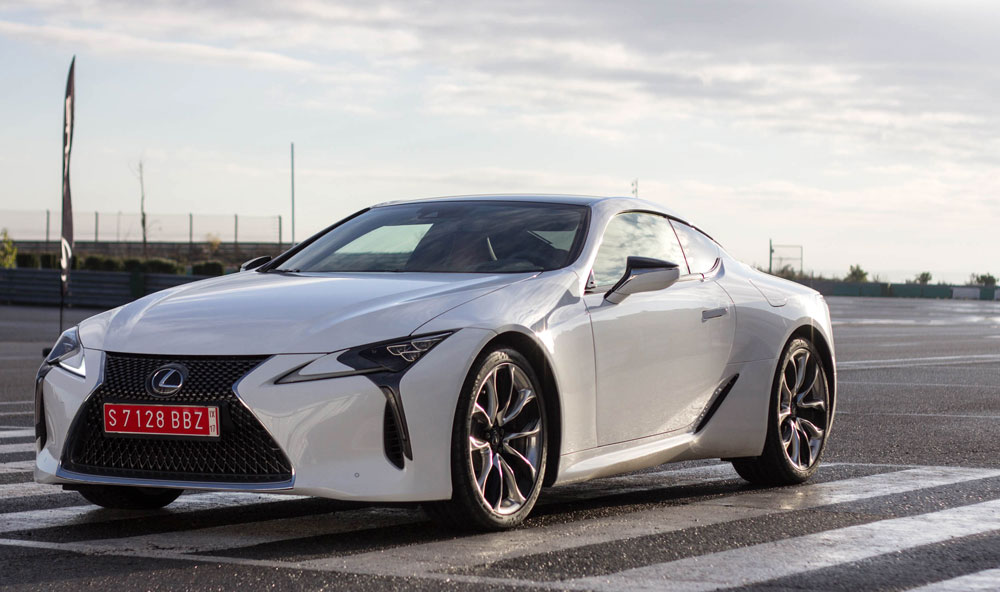 Personally, I’m a fan of the spaceship aesthetic and Lexus’ absolute refusal to look like anything else on the road. In terms of pure style, the LC is a dominant force. 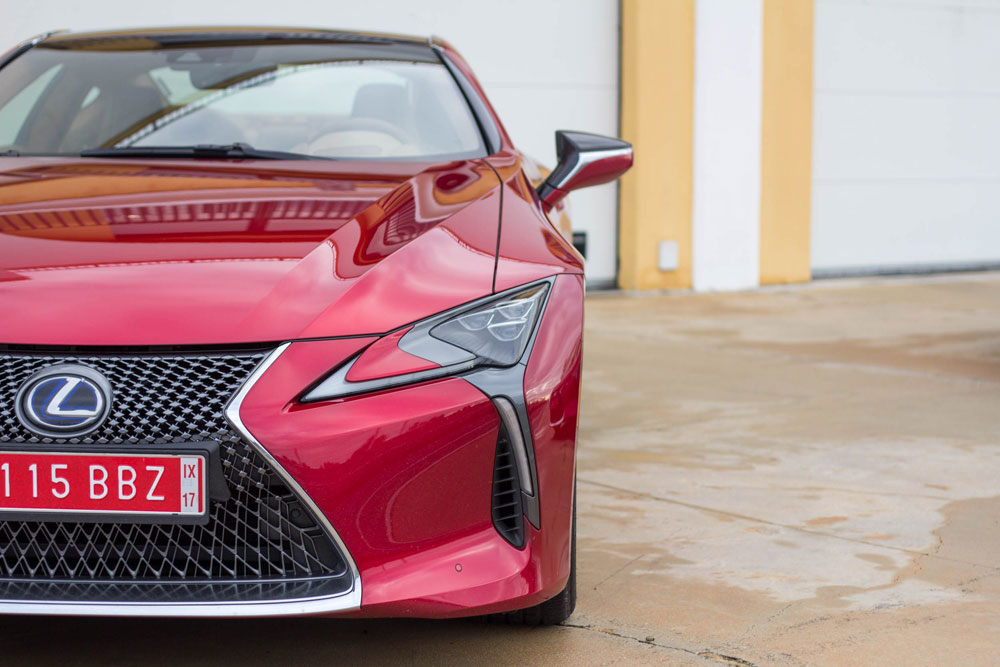 Lexus has continued to refine and refactor its Spindle Grille, and the LC takes that hourglass shape to the extreme — it’s absolutely everywhere, from the front to the back to the flared-out fenders and pulled-in wheelbase. 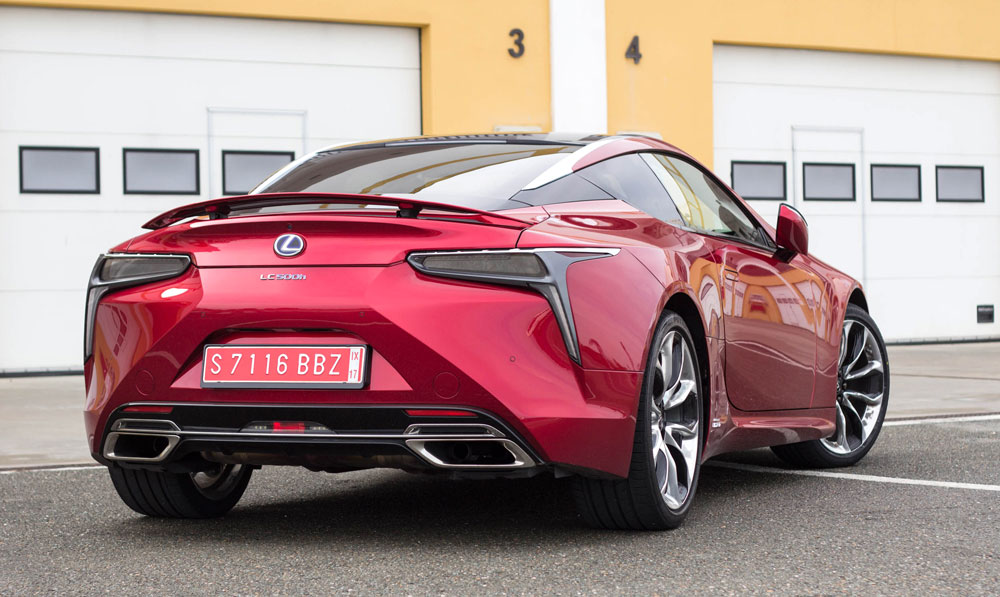 My “try not to die” track driving style lacks much in the way of nuance, and I could only pick up the broad strokes in my 6 laps between the LC 500 & LC 500h on Circuito Monteblanco.

Both cars are heavy, with the LC 500 at 4,280 lbs. and the LC 500h at 4,435 lbs. — even so, it never feels like a hinderance. The LC 500 is all speed, and the roaring exhaust amplifies the experience until it feels like you’re about to crack the sound barrier. Still, my skill level is more hybrid than gas — pushing the upper limit may favor the LC 500, but the LC 500h felt better balanced and quicker to power out of a corner. 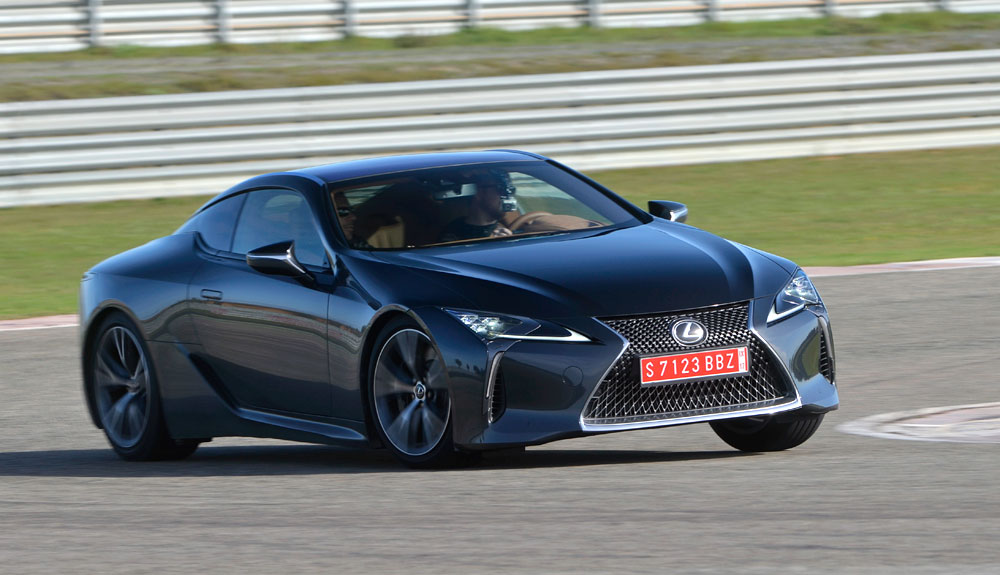 (I’ve read other reviews criticizing the track experience, but any shortcomings the LC has are superficial — there are no fundamental issues here, and the decision to build up the curb weight at the expense of performance is intentional. In a way, you could feel the promise of the LC on the track — the much-rumored LC F will have every opportunity to be something incredibly special.)

When it comes to describing the LC interior, I feel like the only format that will work is poetry. Alas, this is neither the time nor place to compose odes to leather and alcantara, but I can safely say the interior of the LC will sell cars all on its own. 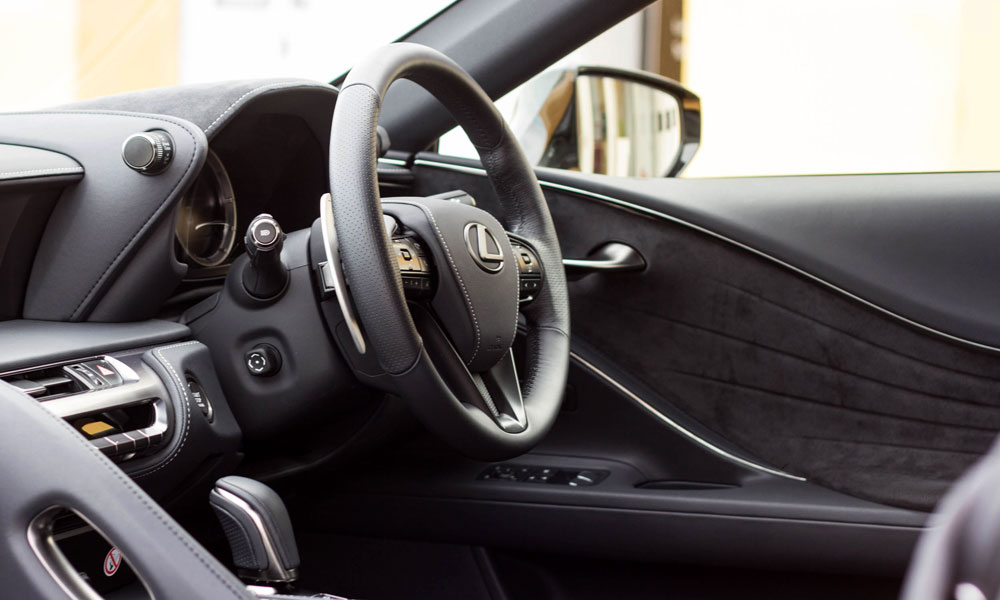 Sitting inside the LC is a singular experience — there is a clear vision to every element, a cohesiveness that shines through with every touchpoint, a quality that’s apparent in every material. 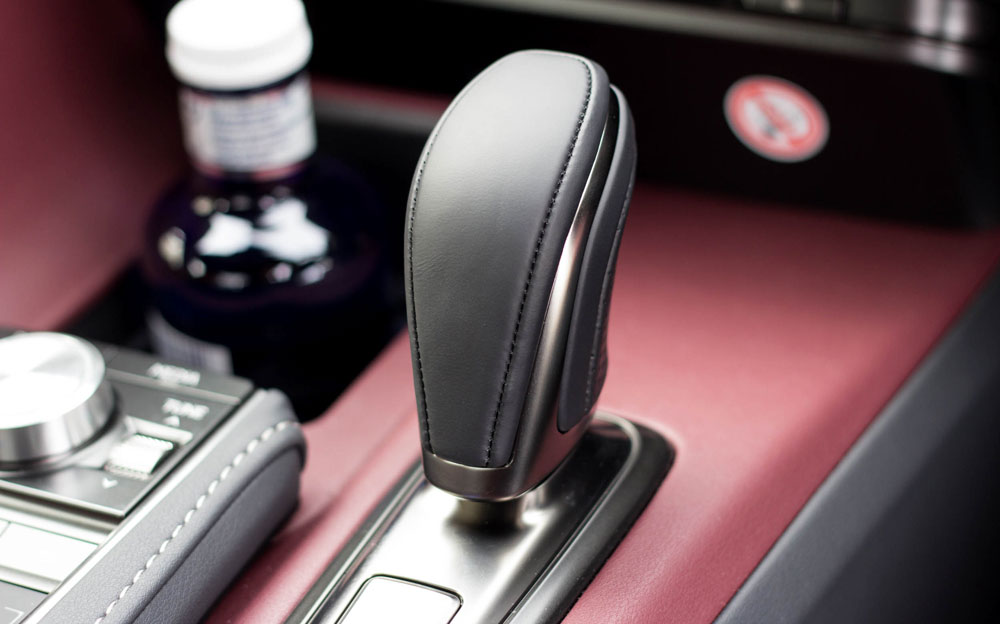 Without a doubt, the LC interior is spectacular in every way, and that’s despite back seats that are unusable, a Remote Touch controller that struggles to keep up, and a lack of adjustability in the front seats. Absolutely spectacular, from top to bottom. 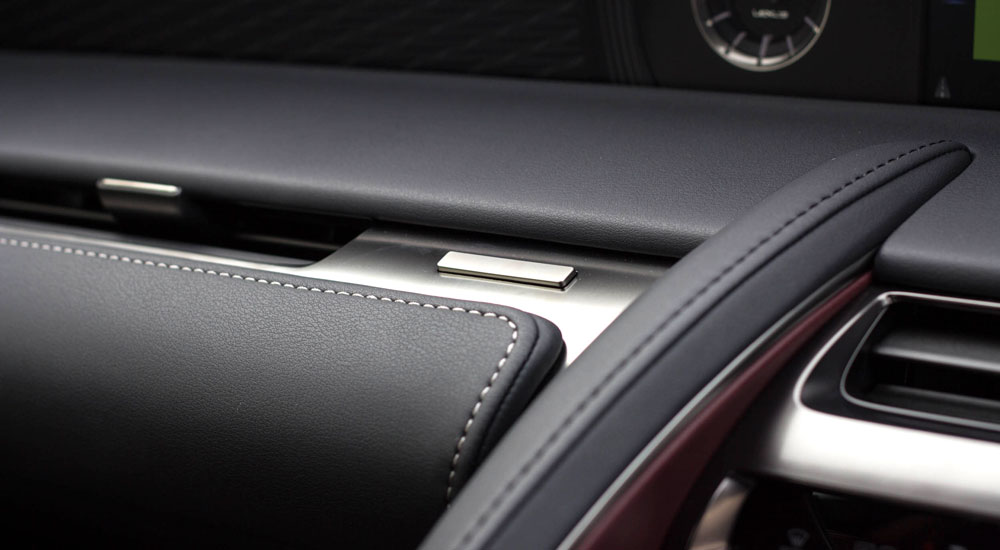 The day ends with a final drive in an Eminent White LC 500h back to Seville, and it’s a blur of scenery and speed. A couple hours in the driver’s seat further reinforces the character split between the hybrid and gas powertrains — the LC 500h is quick to accelerate and happy to settle in, where the LC 500 is a constant battle of self-control and rapturous sound. 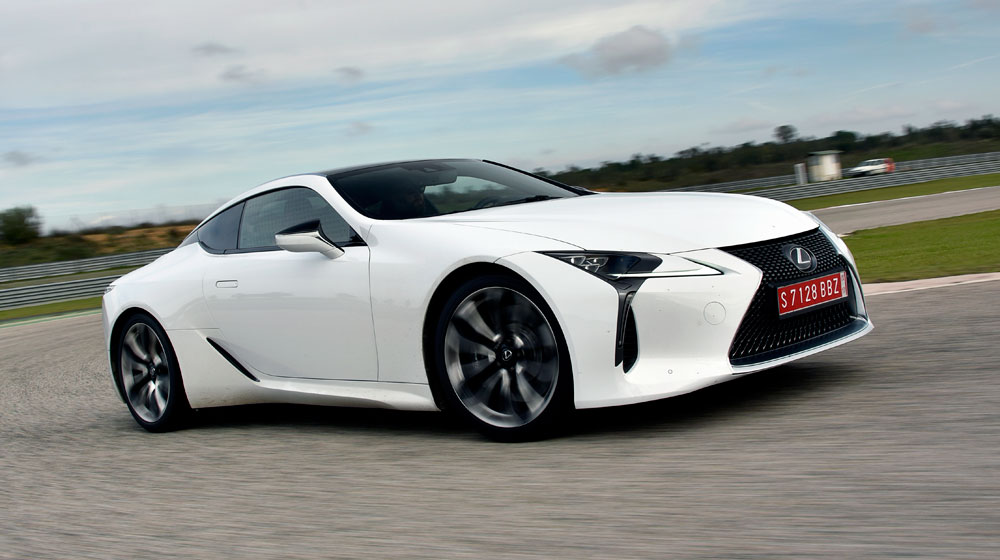 The miles disappear like teleportation, and I’m left with a very clear understanding. In the shadow of the 5.0L V8, it would be easy to dismiss the LC 500h and its 3.5L V6 hybrid — there’s a casualness that offsets the aggressive nature of the LC 500, and there’s room for both in the lineup.

Regardless of powertrain, the LC is very much a coupe with an opinion — it’s meant to be a grand tourer in every way, capable of high speeds and long-distance driving in a most comfortable fashion. With expectations of 400 sales per month in the USA, the LC does not have to be all things to all people, but it does need to inspire interest in the rest of the Lexus brand. The LC will accomplish this task easily.

If anything, the LC brings with it the weight of expectation — this is the future that Lexus enthusiasts have been hoping for, and now every new model has to match this excitement, this obvious passion. It’s a heavy burden, but such is the price of success.