END_OF_DOCUMENT_TOKEN_TO_BE_REPLACED " /> Next Generation Lexus LS to be a Fuel Cell Vehicle? | Lexus Enthusiast
Menu
Log in
Register
You are using an out of date browser. It may not display this or other websites correctly.
You should upgrade or use an alternative browser. 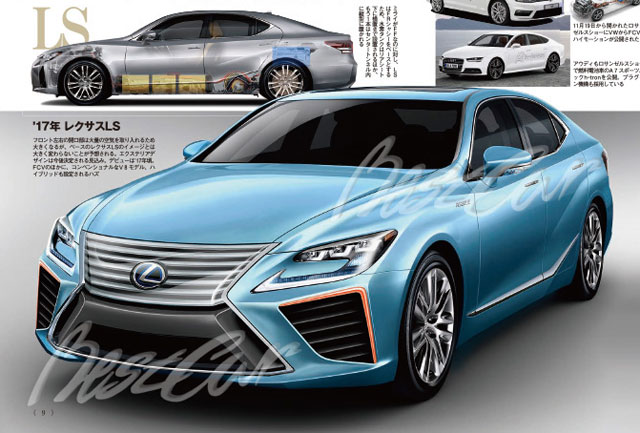 According to Japanese magazine Best Car, the next-generation Lexus LS will be a Fuel Cell Vehicle (FCV) powered at least in part by hydrogen.

Not being able to read Japanese, I can only go by the pictures on the page — here’s the key illustration:

Let’s compare it to the Toyota Fuel Cell System found in the Toyota Mirai:

There are some visible differences between the two setups, which makes sense — the Mirai has a drive motor capable of 151 horsepower and 247 lb-ft of torque, fine in a small car but wouldn’t work in the Lexus flagship sedan.

Even so, it’s tough to say if this Fuel Cell system would be a compliment to the next-generation LS’s internal combustion engine or replace it all together.

Here’s the full page from Best Car, if anyone out there can provide more details: 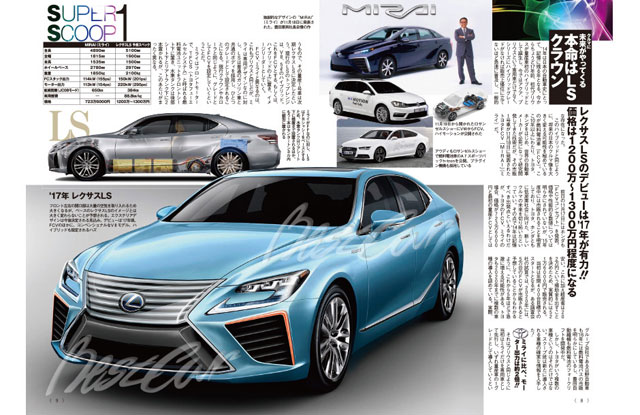 It seems a wee bit too good to be true that this technology would reach Lexus so soon,but I do love the idea!
It's good but honestly I was looking forward to technology from TS-040
I think it looks disgusting, LED in the headlights please lol. LED outside looks good on the IS though.

Looks like Infiniti M and Nissan Altima mated... no thanks!
Nah I the LED outside the lights give lexus cars a very distinct look

it says 200hp fuel cell and 295hp electric motors... which is doable. It seems to be pretty light for LS as well. What I dont understand is the range - 384km under JC08 would be something like 180 miles under US mpg standards, which is too low for such vehicle.
Would be cool as a powertrain option
Nice to see lexus thinking ahead. Just hope the Next gen LS doesn't look like that lol
I hope that its not gonna look like that.

Hope that is not what the LS looks like. I personally would prefer it to take NX styling rather than RC.

But buyers in this segment tend to prefer classy styling, the NX might be too futuristic looking for them.

This is an example of "Best Car" renderings to be trash. I know Lexus IS trying to make polarizing looks but I don't think they would make their flagship look like that. Also, if they were making a fuel cell lexus why don't they just put it on the CT or the IS?
NOOOOOOOO please no. this rumor better not be true.

Why!?
Maybe it's just the rendering, but personally, I do not think Lexus will win more buyers with a fuel cell LS. They need to put in a new model that is the HS's size. If they do this to the LS and it fails, the classic LS will die.
It depends the point of view. To me the classic LS is the relentless pursuit of perfection. To that happens the LS must have the state of the art technology. And hydrogen powertrain is state of the art indeed. Fuel Cell LS will defently not bring more buyers, but I not believe this will be extended to all LS variants. A Fuel Cell LS would be a statement. Like the LFA was and is.
The LS will never die. With how well it has been in the past and with the opportunity for a LS LSF LSH and possibly a fuel cell LS. Lexus is trying to make an LS for everyone. We need to step above Tesla now as well as the usual German competitors.
Akio Toyoda has been reportedly in collaboration with Elon Musk over the new LS

It would be a good move from Lexus. Obviously if it happens it would no be in the entire LS range, but on a specific model. Those headlights are cool.

Yes an addition the line up.....Lexus would not offer this only.....the yellow turn lamps are also cool with the headlamps. This would bring more sales along with more engine offerings. Lexus will be one of the first too !

I pray to God the headlights wont look like that! That looks just awful.

Do Agree with All. Firstly this Mags Illustrations are Far from True. Yes the LS could be using Fuel Cell and that would be Great for a Flagship Model. But the Looks as in this Illustration are aweful. Seriously Lexus should Really consider to come out of those Ever Weird Looking Headlamps. Yes LED Technology or Lasers are Welcome but Not in those Weird Shapes. Please Listen Lexus.

For a start, it wont look like that (my source has seen the next gen LS, RX and GS-F) and its apparently getting a twin turbo V6 during its life at some point
Doesn't even look that good. It is very ugly in my opinion but I am a bigger fan of coupes anyways so.
It won't be a fuel cell vehicle. It will be a twin turbo V-8