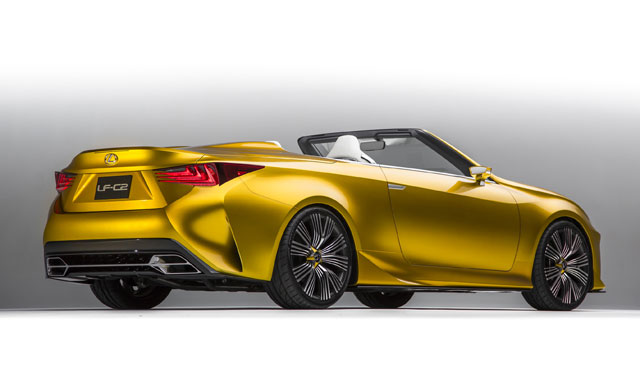 Automotive News has more details on the Lexus LF-C2 and its chances of reaching production:

Bracken says the LF-C2 was “purely a concept” and not slated for production. But according to a person familiar with Lexus’ planning, the brand is considering whether to produce a version of it to sell as the convertible RC — an affordable, sporty stablemate for its newest coupe — or to build a convertible version of the much more exclusive LF-LC concept it showed in 2012 at the Detroit auto show.

A convertible based on the LF-LC would be a halo car that elevates the brand, while the RC version would sell more vehicles. “The question is: Is the brand willing to support two convertibles?” the person said.

The uncertainty of two convertibles in the lineup makes more sense than the earlier rumor that Lexus had to decide between the RC convertible and a three-row crossover — this point is addressed in the Automotive News article:

Lexus dealers say they are eager for an entry in the growing three-row crossover segment, one that could compete with the BMW X5 and Audi Q7. Lexus said the decision over how to replace the IS convertible will not affect its plans for a three-row crossover.

Can't wait to see the production version of RC convertible and the TX :)
I'm not pretending to know the first thing about running a car manufacturer,but Lexus being seemingly panic stricken about having too many models strikes me as more than a little odd.

IMO they have too many, it gets the point where the avg. consumer gets confused on all the models then you have f sport, hybrid etc.
Well,that's trim levels and engine choices,and they have far less of those too than the main competition. On BMW's international website there are current six convertible models listed. Surely it Lexus could manage two?
Agree wholeheartedly. Every single one of Lexus' competitors offer more than one convertible, except Acura and Infiniti, which aren't even trying. The Japanese are definitely more conservative and meticulous with their product planning and that is noble given the quality control on something like the Mercedes CLA. However Lexus could use an "affordable" (lol) RC convertible and a new Mercedes SL competitor as well. Having both options available to prospective customers wouldn't be bad at all.

There is harm done if Lexus brings a two convertible coupes. We welcome it and Lexus will not discracted with Nx sales.
I'm excited to see TX And I hope to be close to the size GX And cabin screen resembling GS F SPORT