END_OF_DOCUMENT_TOKEN_TO_BE_REPLACED " /> Report: No Production Model for Lexus LF-C2 Convertible Concept? | Lexus Enthusiast
Menu
Log in
Register
You are using an out of date browser. It may not display this or other websites correctly.
You should upgrade or use an alternative browser. 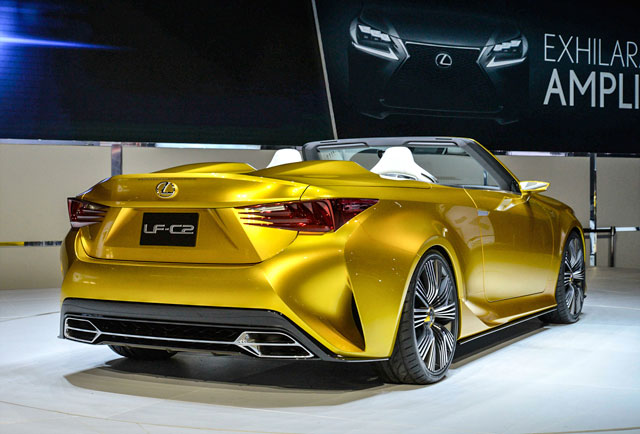 According to Motor Trend, the LF-C2 convertible concept will not be made into a production vehicle:

In fact, under the original plan, the RC Convertible was set to be the next all-new car in Lexus’ lineup. As convertibles make up 1 percent of the total U.S. Market, though, the decision to not do a 3-row RX crossover and go with a convertible infuriated the dealers into some sort of angry revolt. Lexus dealers have been howling for a three-row crossover.

The result of the revolt is that Lexus has just begun work on a three-row crossover based on the upcoming LS platform. As that’s a rear-wheel-drive platform, this will make the upcoming Lexus vehicle competitive with the likes of the aforementioned Mercedes GL and Audi Q7, as well as the Infiniti QX80.

Why Lexus had to decide between the convertible and the crossover is not quite clear — there could be no two vehicles less likely to compete with one another. The situation is likely a case of conflicting budgets, but then why display the LF-C2 at all?

There’s another unfortunate byproduct, if this rumor proves true:

Some inside Lexus are furious over this decision because the RC was strengthened (made heavier than it had to be) to be a convertible — and as it turns out, that was pointless. Why else would it use the center section from an IS Convertible?

Oh no... How unfortunate. What a waste of weight that could have actually resulted in an M4 beater on the track.
Strange . . . At the reveal we saw Jeff Bracken lean down and hug the car saying, "I love this car!" There will be no spreading the love . . .
This concept is really infuriating. Not different enough from the RC to be unique, and just strong enough to keep prospective customers from buying current ISC models. To keep interest high in the RC, the next convertible needs to be a separate model, not an existing one with the roof chopped.
well I do like the looks of this convertible... the new LS platform has me interested.. Doesn't the GX and LX have "third rows"?
Wait what? noooo! no ways!
Who's to say they won't build both? The development of the RC C will have already been completed whereas the three row cross over will still be a few years away.
Ok, convertibles sales volume are low... But some cars bring what we can call Brand prestige and recognition... And it's not with a 3 row cross over that they will achieve that. At least in Europe.... It was not that kind of thinking that made the LFA possible. With the NX Arrival, it is time for the next generation RX to have a 3rd row seats option. And by the way, both GX and LX have 3rd row seats. So... I do not really understand the justification not to go ahead with this convertible.
I know I do not know much about making these cars, but if the RC is already created, how hard will it be to just turn it into a convertible? The three row crossover will be good but why can't they do both? This may be one thing I do not like about Lexus: they are SOOOOO slow at producing products. I know they want to test it until it is perfect but why does it have to be this slow?
Krew, Do you have any sources that attended the Lexus dealer's meeting? I'm wondering what other future product info they were told. Also wondering if the 4-cylinder turbo from the NX is definitely "on" for the 2016 IS?
Definitely an odd story if true. After spending the cash to develop the RC capable of having a convertible version, why quit now? The development of the car is practically finished so it is hardly competing with the budget for the new RX. Also, Toyota is set to make records profits this year. Not far off $2k net profit per vehicle! So why not just do both Lexus?