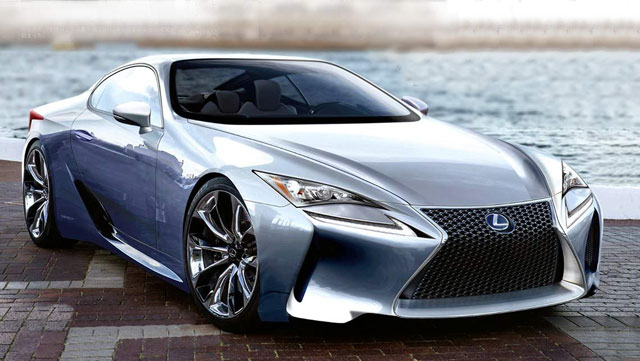 In a recent interview with Auto Express, Lexus Europe vice-president Alain Uyttenhoven recently discussed the production LF-LC and how it will compare to the LFA:

“It will not be a full carbon car costing £350,000. It will be – in terms of construction – a more normal car, a car than can be manufactured in larger quantities than just a batch of 500,” Uyttenhoven said. “This shows there will be more emotion from the brand.”

Uyttenhoven wouldn’t be drawn on a time scale for the car, but confirmed that its design “might be very close to the concept,” and that other Lexus F models are in the pipeline…

A production model based on the LF-LC was confirmed as far back as March 2013, with most rumors putting a reveal within the next two years.

There’s even been speculation the new model will resurrect the SC nameplate, and could feature a new twin-turbo V8 generating over 600 horsepower.

Note: The above image is a rendering from Holiday Auto, and not an image of the production model.

The image was Photoshopped from the original blue LF-LC lol

Lexus better have come up with some kind of revolutionary hybrid Technology to Power this car, because the concept promised a hybrid.

Who care's if its a hybrid! I rather have a Twin Turbo V6 or V8 than some weak NA engine paired to a electro motor.
The rest of us care. Actually People care so much that both Porsche and Ferrari now are making hybrids. If you had some knowledge about anything else than Your backyard, you would understand that Lexus is known in Europe etc as mainly a manufacturer of hybrid-cars.
If you knowledge spanned more than one decade you would know that Toyota (Lexus) produced superior turbo engine's for more than two decades (7M, 3S, 1JZ, 2JZ, 4E). And started slacking off around 2003 and tried compensating their weak V6 NA engine's with their Hybrid systems. That clearly hasn't worked because for years the Germans have been dominating WARD'S best engine lists. Toyota's V6 GR engine's aren't even sold in Europe without the heavy and expensive hybrid systems because the can't pass emissions and even if they did they wouldn't stand a chance against the single and twin turbo engines from Audi, Mercedes and BMW! So what i was saying its time for Toyota to play catch up and bring out more Turbo engine's like the one from the Lexus NX! They need at least 3 more, a twin turbo I6 collaboration engine with BMW, a V6 and V8 twin turbo for their performance Lexus models. Because even Toyota has said that Hybrid technology isn't their yet to make a Hybrid F car!
Wow. That's a lot of rambling this early in the morning(North-Europe). I cant reply to such nonsense, sorry.

LEXUS is moving in the right direction with these new Model offerings for the very near future. Keep it coming and make it very competitive !