END_OF_DOCUMENT_TOKEN_TO_BE_REPLACED " /> Lexus ES 350 Production in Kentucky to Start by Late 2015 | Lexus Enthusiast
Menu
Log in
Register
You are using an out of date browser. It may not display this or other websites correctly.
You should upgrade or use an alternative browser. 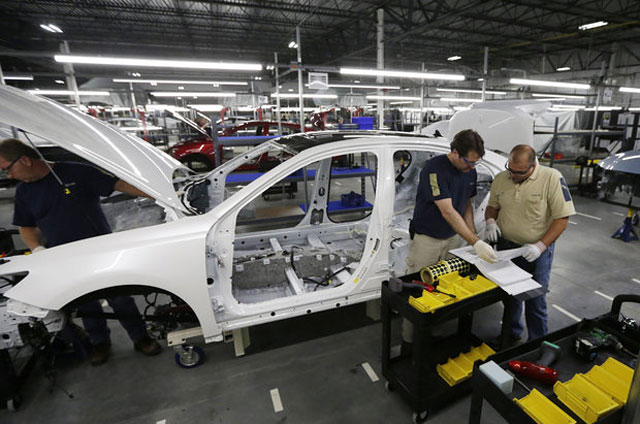 The Lexus manufacturing plant in Georgetown, Kentucky is getting ready for the production of the ES 350, with much of the construction required for the new 307,310 square-foot facility either completed or in progress.

Equipment at the existing plant will also be improved to facilitate production, and staff is also undergoing extensive training for assembly of the Lexus model — from the Lexington Herald-Leader:

Group leader John Kidd holds up a manual roughly the size of an encyclopedia volume. That, he said, is a summary of the steps for one part of moon-roof installation.

First, the leaders study the set of instructions as thick as their fists. Then, Kidd and team leader Scott Peach will practice bolt installation in the roof again and again, initially for correct placement and solid installation, later for time. Then they will teach it to some of the employees who will be working in the new plant.

First build trials will begin in March 2015, with production expected to start late next year. An estimated 50,000 ES 350s will be built annually.

None other than the facelifted XV60 for the 2016 model year. Interesting to see how they keep that one under wraps. Likely a Chicago 2015 reveal. (On my way Paris Salon '14!)
Lexus should always be Made in Japan !!