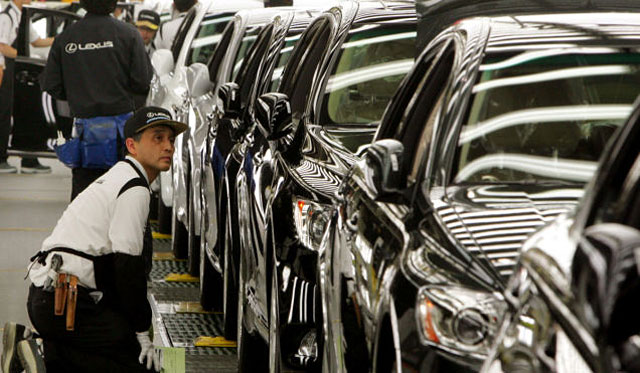 According to Lexus International vice-president Mark Templin, there are no plans to start manufacturing vehicles in China:

“We don’t have those conversations,” Templin said. “We haven’t gotten to the point where we have serious conversations about building cars in China yet.”

The immediate priority is building the brand in the country, where German badges are coveted as the epitome of premium and Japanese brands have often been shunned because of political tensions between the governments in Beijing and Tokyo.

“We’re only 10 years into the China market right now,” Templin said. “We’re worrying about developing the brand, making sure people know what we stand for, rolling out a dealer network that’s capable of taking care of customers.”

For some perspective, here’s a breakdown of the 2013 sales:

In calendar year 2013, Lexus sold around 73,000 vehicles in China, 13 percent more than the year before. It sells every model in its lineup there except the HS hybrid.

I'll never understand how Audi can manage to sell so many cars in China considering how boring look them and how crappy is their reliability (especially talkin about diesel engines). I can understand BMW wich has a story of beautiful sport cars and build great cars nowadays but audi wich until the 90's was considered just a re-badged VW, remain a non sense to me, of course the larger part of its sales comes from the fact that is considered very trendy in europe and china, way more trendy than BMW and Benz. In reality today audi share even more components with VW, Seat and Skoda than in the past. Aniway the fact that Lexus is the fastest growing brand in Europe is really encouraging: It may become the "next audi" in the next 10 yrs.

I am from China. Audi was the first imported car brand for government use, so people feel it's decent. Driving a BMW means you are wealthy. Most don't know Lexus in China, rest think Lexus is a luxury Toyota.
Lexus never become the "next audi" in the next 10 yrs in China. Because it's Japanese brand. Chinese feel German products are well designed and good quality. Buying a Japanese product make you a traitor.
I'm going to tell your way of thinking to all the jewish in the world: Ehy guys, don't buy germans.
:) I like Japanese products, but PRC government want to make people hate Japanese. It's political
I absolutely loathed to the most maximest, the visceral hate, the vindictive feeling every time i hear of or see an audi. You cannot...never, ever...ever...ever Trust a person that chooses to waste their freedom of choice by purchasing one. Now, about China. Its is very difficult for a Japanese brand to grow there period. Until that place is completely 'free' they will never break the chain. A lot, if not majority of sentiments are generated and propagated by the communist party. You've mentioned Germany & Israel, difference imo, everything is out in the open. People have healed, there is freedom, people have a choice w/o repercussion & peer pressure. They are not taught, pushed, advertised to keep hating because of past transgression. Open society... Simple as that! #IMO

China is going to be a tough market for Lexus, the strange thing is that even Chinese people living in South Africa don't buy Lexus or Toyota products at all, their rather buy German BMW,Mercs and Audi's. So i guess china is not the only market were Lexus is not taken seriously even though the Lexus brand has been here for the past 20 years. The sales speak for themselves just last month alone Lexus only sold 101 cars in the month of July.Figures obtained from the www.naamsa.co.za website.
History plays a part in this. Japanese and Chinese don't go very well together. It's no longer a mere product quality or knowledge issue. It's more complicated than just sales and consumers.

and that´s the BIGGEST reason for me why Lexus will never play a big rule in the China market.
So following this way of thinking jewish shouldn't buy german cars!