END_OF_DOCUMENT_TOKEN_TO_BE_REPLACED " /> Faked Spy Shot of the 2016 Lexus IS F | Lexus Enthusiast
Menu
Log in
Register
You are using an out of date browser. It may not display this or other websites correctly.
You should upgrade or use an alternative browser.

Is this a spy shot of the 2016 Lexus IS F? Jalopnik believes so, running the image yesterday after it was discovered on the Lexus Spain Facebook page.

Unfortunately, the car in question is nothing but a Lexus IS with some duct tape and a TRD Japan body kit — here’s a photo for reference: 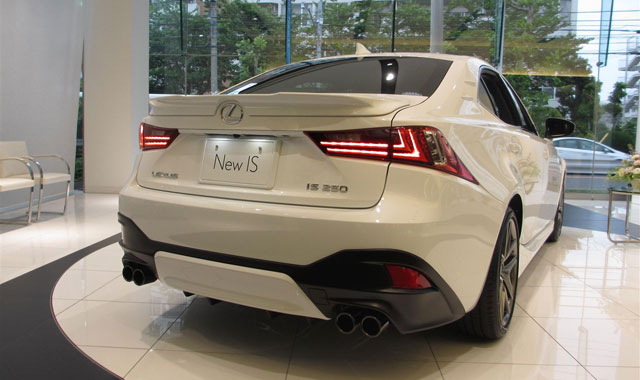 (It’s impossible to say why Lexus Spain posted the photo, but the fact that it’s still on their Facebook page 24 hours later tells me this has nothing to do with the next-generation IS F.)

I saw Lexus of Russia post this on Instagram and their caption was "F" but I guess it might just mean F Sport. I really thought it was a teaser for the ISF but you're right the kit is not Lexus's.

I mean Lexus of Spain

And if it really is a F it should have stacked quad exhaust, as seen in F models like RC F and IS F but except for the LFA.
What a terrible chop. No fender flares and no ultra wide stance like the RC-F. The spoiler looks limpy and the rear bumper is way too big for narrow the car looks.
Damn! :(
i thought there will be no isf?

It's not. Hence this fake.
I think he means he thought the ISF was getting axed for 2015 and we wouldn't have seen spy shots anyways.

It is just a IS350 with a ginormous bumper and a limpy spoiler. Nothing says even remotely that it could be interpreted as an IS-F photoshop. Nothing about it is even close to how an IS-F would be.
Hate it

Hate it? This is still a IS for heaven's sake. SMH.
And? I have this car so obviously I love it, I hate that spoiler and that bumper. So, I hate it!