There’s a significant amount of new information on the Lexus NX with the crossover’s debut at the Beijing Motor Show today — let’s start things off with the full international press release. 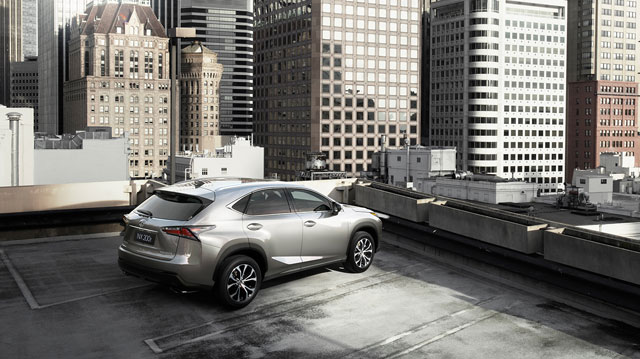 Lexus’ first luxury compact crossover, the NX, made its world premiere here today at the 2014 Beijing International Automotive Exhibition, which runs through April 29. The NX, created for urban and active lifestyles, features an edgy, emotional design that is distinctively Lexus. Sales of the NX are scheduled to begin in world markets in the second half of 2014.

Two powertrain variants of the NX are on display in Beijing: the NX 300h, a highly efficient hybrid, and the NX 200t, the first Lexus fitted with a turbo engine. 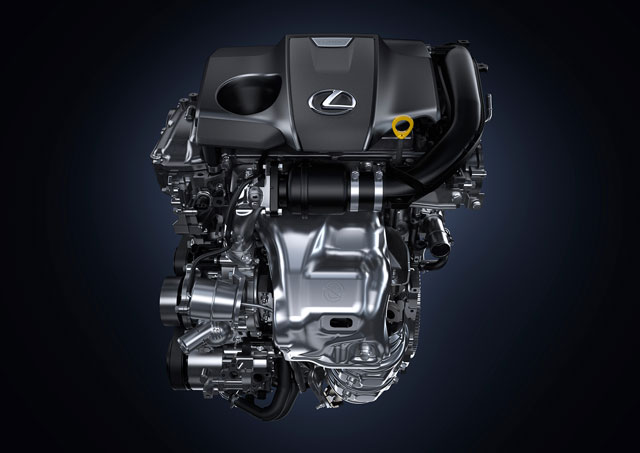 The Lexus-developed direct-injection turbo engine features the world-first2 combination of a cylinder head with an integrated water-cooled exhaust manifold and a twin scroll turbo charger. This combination in addition to other new technologies such as a turbo-specific D-4ST fuel injection technology and continuous variable valve timing with expanded valve opening angles (VVT-iW) realizes both an excellent ride and environmental performance. 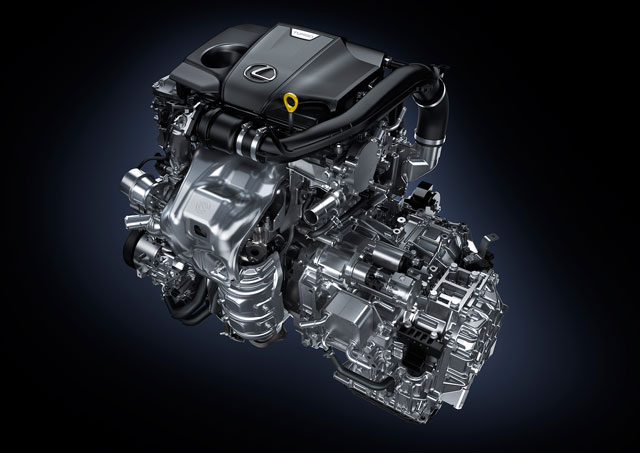 The 2.0-liter NX is the first Lexus to be fitted with an idling-stop system, which reduces fuel consumption by automatically switching off the engine when the vehicle is idling. The system used in the NX has extremely fast engine-restart time.

To ensure Lexus quality and performance, the new turbo engine has been tested for more than 1 million kilometers. 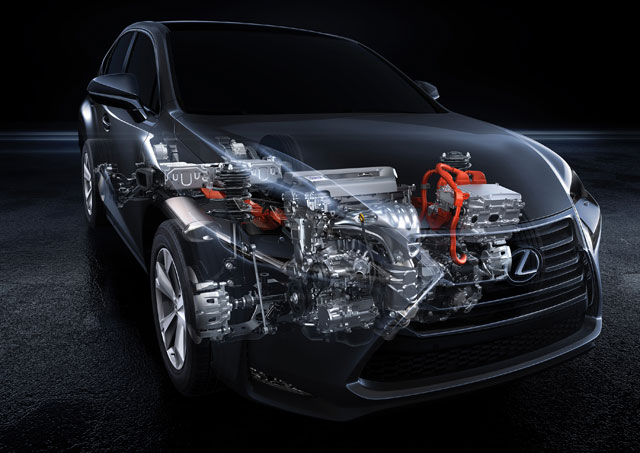 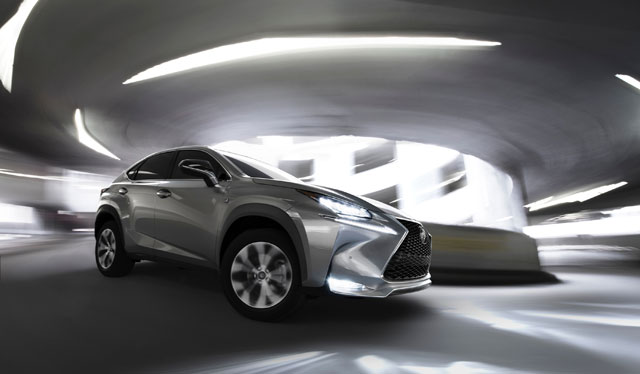 The NX employs specialized Lexus manufacturing techniques such as body adhesives and laser-screw welding3 to improve the rigidity of the suspension system as well as the body, enhancing overall driving performance. 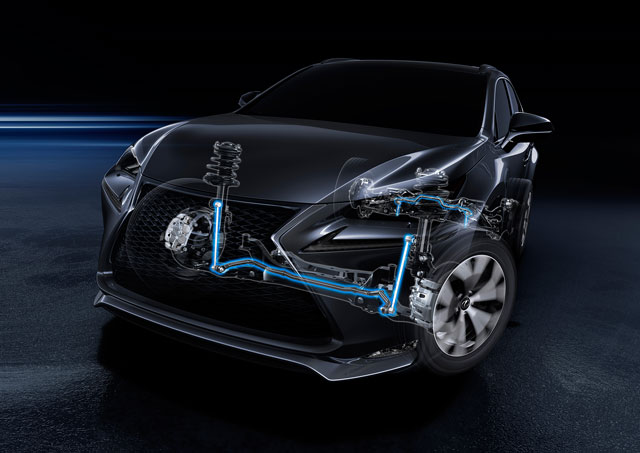 All-wheel drive turbo models feature a Dynamic Torque Control All-Wheel Drive system which automatically switches from front-wheel drive to all-wheel drive by calculating the driver’s intended driving line and adjusting the distribution of torque to the rear wheels as required. This increases cornering performance on all surfaces. All-wheel drive hybrid models also benefit from improved cornering, particularly on slippery surfaces, due to the E-Four system.

The “F SPORT” grade boasts numerous exclusive features such as specially-tuned suspension and interior and exterior design. In addition, the F SPORT variant achieves even sharper handling due to performance dampers that improve rigidity while absorbing small amounts of flex. 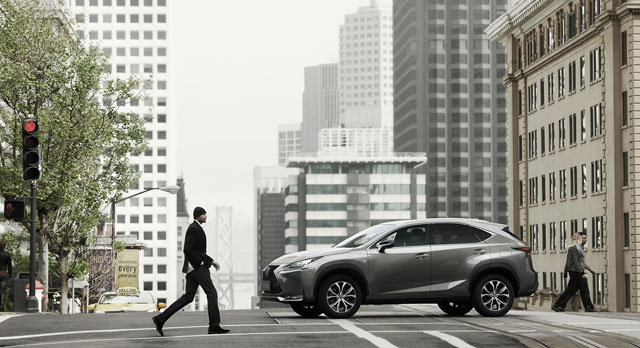 The Panoramic View Monitor, introduced into a Lexus vehicle for the first time, helps the driver avoid other vehicles and pedestrians approaching from the sides. This system combines video from four cameras mounted to the front and rear sides of the vehicle, offering a view of everything happening around the car, including in blind spots. The display is automatically adjusted based on gear-stick operation, with the system able to display enlarged views from above the vehicle.

Radar Cruise Control with All-speed Tracking Function maintains inter-vehicle distance within a set speed and supports the driver by detecting the vehicle ahead and ensuring that an appropriate distance is maintained from cruising speeds down to a stop.

Considering kit's size and being platform-based on the Rav4, I'd expect weight to be near the Acura RDX (3750-3900) BD
So , what's the engine's code ? 2AR-FATE
Please, Lexus update front lights for IS, GS and LS in same style as RX and NX

Patience, Adrian! Not too early, this is bad for current car holders as well as reselling price. GS facelift is already 2016, IS is brand new and for itself perfect. RX is about to be changed anyway! Mike
I agree! But let's not forget about ES!!!

Really 235HP! Thats weak compared to a late spec 3S-GTE pushing 280HP. And we still don't know the most important thing about this new engine, is it a open-deck or closed-deck design?

260ps , is what late-spec 3S-GTE can do ... they concentrate about how it drive & how the torque available , instead of blindly look for power .

Every other brand is dead to me, Lexus is constantly engineering amazing.
Lexus has excelled in the design and technology department for this vehicle and it will surely be a success. However, I am surprised that in a world of 7 and 8 speed transmissions, Lexus decided to use a 6 speed transmission, which seems dated for this class and caliber of vehicle.

When Lexus created the 8-speed, it was for a 380HP Lexus LS. 8-speeds are not for every vehicle on the planet. 8-speed is totally overrated, as will 9-10 speeds. The future is CVTs that drive like regular slushboxes, like the new Corolla has. BD

Automotive News has some more details on the measurements and quotes from Lexus people about what to expect from the NX Mentions an expected 34-36 MPG combined for the hybrid, a smooth, refined, linear power delivery for the Turbo. Rear leg room and cargo room within an inch of the bigger RX, and the vehicle is "roomier than we anticipated". http://www.autonews.com/article/20140419/OEM04/140419756/lexus-nx-to-offer-a-235-hp-turbo-or-194-hp-hybrid-in-u-s BD
I thought 220 hp for the Hybrid, or worst case 200, not 194... Love the Turbo's torque figure though, very healthy 258 lb-ft that's more than the 3.5L's 248 lb-ft!
Yep, definitely want this! To be more specific, I want an AWD NX 300h in Fire Agate Pearl with the Sport Appearance Package from design, Parchment Leather and Bamboo Wood Trim. Also throw in Lexus Remote Touch Interface with a touch pad, Pre-Collision System with All-speed Dynamic Radar Cruise Control, Blind Spot Monitor with Rear Cross Traffic Alert, power folding rear seat, Lane Departure Alert and a bunch of accessories! On a side note...hybrid horsepower is down vs. the ES 300h...200hp vs. 194hp. The only idea I have is that horsepower was decreased to increase MPG. Maybe we will see 40 mpg after all and not just 35-38 mpg!!! Come on LEXUS!!!
Will AVS be available in N. America, standard on the F-Sport or optional?
Any estimates for towing capacity?
More information I found from CarScoop.com about the 2.0-liter Turbo , it's code is 8AR-FTS , it have power output of 175-kw or 235-hp or 238-ps at 4,800-rpm to 5,600-rpm , and torque output of 350-Nm or 35.7-kgm at 1,650-rpm to 4,000-rpm . It use charge-cooler (water-to-air intercooler) which place behind the engine (in front of firewall) , that's why the pipe directly weight from turbo to it's intake manifold side . Proof , The Charge-Cooler - http://4.bp.blogspot.com/-G42loC2tyiI/U1VEii-CC2I/AAAAAAAQ2Vg/THSTFQOoUyU/s1600/Lexus-NX-20.jpg The Engine Code & Output - http://2.bp.blogspot.com/-INvIHE176EA/U1VMrD1NSCI/AAAAAAAQ2Yw/Pf8c5isaG0A/s1600/Lexus-NX-1.jpg