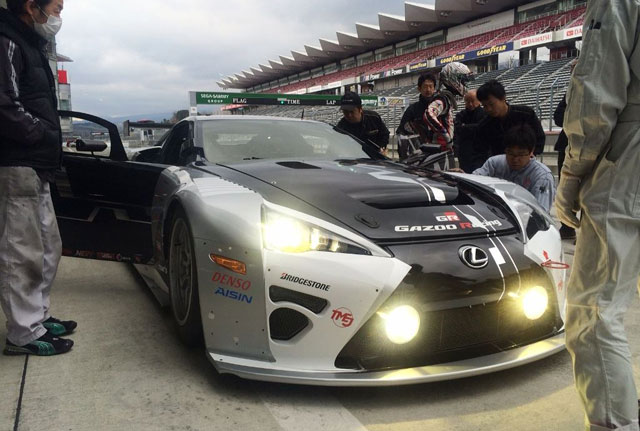 The Lexus LFA Code X race car had its final test at the Fuji Speedway in Japan before being shipped to Germany for the Nürburgring 24 Hour Race in June — Gazoo Racing posted some photos on Facebook:

The LFA Code X is a significant new development in Lexus racing — the bigger 5.3L V10 and full carbon frame body would indicate some serious research and development, and there’s speculation this Code X also has a longer wheelbase than the current LFA.

The LFA Code X will make its racing debut at the 2014 Nürburgring 24h race in June.

Is Lexus training the core parts of the Lexus LFA 2.0? BD

Fingers crossed.
Yes, it is for the LFA 2 underpinnings in the LFA guise. 5.3Liter V10 + hybrid and possibly a much higher revving engine.

It is not a "speculation" that the LFA Code X has a longer wheel base. It is an official fact as per the specifications written on the Gazoo site. The LFA Code X is a few inches longer and a few inches wider.
The new LFA with the spindle treatment
Go win the Nurburgring 24 hour already. Time to put up Lexus,been testing long enough go win the darn thing.