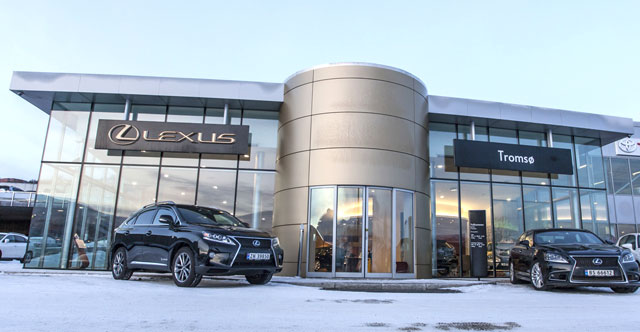 Martyn Collins from the Lexus UK blog recently visited the city of Tromsø in Norway, home to the world’s most northernly Lexus dealership:

The sales manager at Lexus Tromsø is a colourful character named Trond Johansen, a man who has enjoyed previous careers as a professional footballer before becoming coach for Norwegian Premiere League team Tromsø IL.

Trond explains that Lexus customers do ask for some modifications to their cars that may not be as popular further south, including insulated and long-range fuel tanks, not to mention block heaters that pre-warm the engine after a night in the freezing cold. But it’s surprising just how few modifications are made to Lexus models this far into the Arctic Circle.

(The city of Tromsø is perfect for viewing the Aurora Borealis/Northern Lights — in fact, I featured a photo gallery in 2012 combining Lexus vehicles with the lightshow.)

The "colourful character" had an unbelievable left foot that could send the ball flying at a radar gun-measured 89 mph and earned him the nick name "the sledgehammer". One of the nicest people I've ever had the pleasure to know!
Cool read…The new glass Lexus structures are well done.