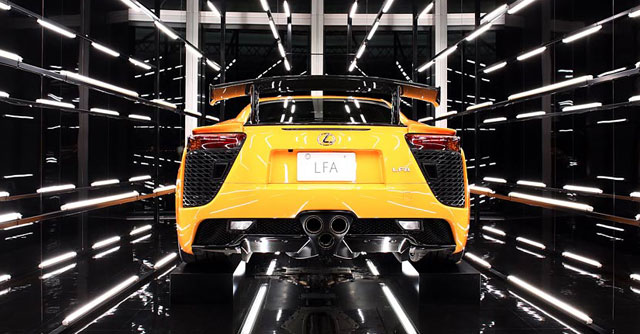 The Media Ambition Tokyo 2014 event features eighteen artworks by 16 of Japan’s most cutting-edge technological artists, and as a sponsor, Lexus is featured in an installation by Rhizomatiks

The placement of long light tubes gives the LFA Nürburgring the appearance of movement, and makes for quite a spectacle — would be something to see this in person.

The Media Ambition Tokyo event runs until March 30th at two venues; Tokyo City View on the 52nd floor of Roppongi Hills and INTERSECT BY LEXUS in Aoyama.

I'm saving hard for this car.
The orange color is very strange when the light gets into it. It varies from real orange to canary yellow. Difficult to explain when you have never seen it. Our LF-A was photographed in the harbour upon arrival. Ofcourse the pictures made it to Internet in no time. The reaction of my wife was; We have not orderd that. Since then, she always had problems with the color as we ordered real orange. A paint specialist explained to me the procedure of painting and why the color changes that much. Best light is during the day when the light is bright and there is no direct sun. Beautiful.