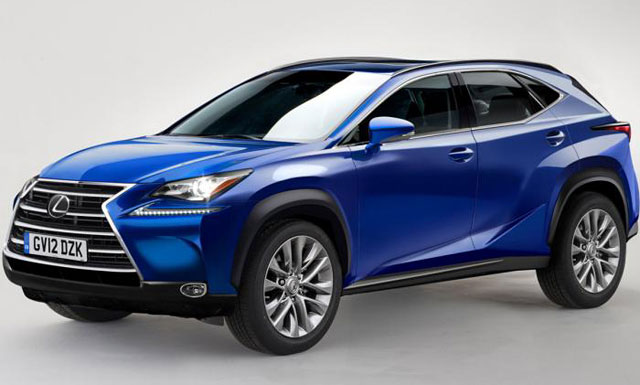 Auto Express has some new information on the Lexus NX, including the new rendering seen above:

Lexus has revealed that its new NX crossover will arrive in the UK in October, and prices are expected to start at around £30,000 – putting it in close contention with its Audi Q5 and BMW X3 rivals.

A sporty front-wheel-drive NX200t F Sport is likely to join the range later. This will be powered by an all-new 2.0-litre four-cylinder turbocharged petrol engine, which is a replacement for Lexus’ ageing 205bhp 2.5-litre V6, and will be used in the IS line-up, too.
It produces around 240bhp, and promises a significant improvement in emissions and fuel efficiency as well.

The concrete launch date and pricing speculation straight from Lexus adds some weight to this information, and the rendering manages to capture the spirit of the previously leaked production NX image, although it lacks some sharpness in the front end.

Lexus Norway has estimated that the NX 300h will sell as much as all the other models combined. I think it's a very safe bet. :-)

This is the proper SUV that I really want to have Brand New.

The greenhouse should be a bit larger.
Need to see the Fsport.
looks damn hot! i really missed a car like this in the lexus lineup ... but sadly it also looks photoshopped in some ways ...i wait for the official pics ;-)
That is not a true rendering from Lexus. Sorry fellas.

Didn't mean to imply that it was, I've edited the post.

Is this a replacement for RX ?

No, it's a new model - compact SUV, will be sold alongside the RX.
thats cool .. thanks for the reply mate ... if this is a replacement then I might need to sell my current version ..
Word is it will be sized similarly to the original 1999-2003 RX 300.
alright .. hope the price is lower than the RXs .. should be right ?
If this is the compact SUV, does that mean the RX might come with 7 seats? Or is there going to a TX?
Yes. The RX is priced in the UK from £45k. The quote above suggests the NX will start around £30k. That seems like a bigger gap than I would have expected but then the UK pricing structure is quite different to other markets. In the US the base RX comes in cheaper than the GS, but its the opposite there.
Nothing can replace the RX.

Agree. I wouldn't consider it a bad thing.

The grille is off, but the NX concept may make it to Center Stage 240HP works for me. I would expect it to weigh about 100-150 lbs more than it's Rav4 platform-mate (3500 lbs in Limited Trim). 0-60 in under 7 seconds..... BD
Actually its not bad looking at all ! Looks good to me.. I kno this isn't the real thing but it has just the right amount of edgy and bold design
They need to get rid of the 5 chrome lines that is in the middle of the spindle grill..looks like crap. Fix that and it will look good.
The hood and front fenders looks so soft, and the side still aggressive like the concept make it as if they are 2 completely different cars in one :(
The photoshop... Great attempt, but it makes the NX look like a CRV! The blurry teaser was much better. :P
Front-wheel-drive? :/
Eh. I'm not feeling it. Too many curves and straight lines conflicting with one another remindes me of the Infiniti FX. Not a good thing. Wayyy too much RC in the front, not that its a bad thing though... And I hope they don't just enlarge the alloys from the GX, as seen here. I can't take anymore ugly renderings. Bring on the p-ready!

Relax people. This is just a "rendering" = drawing = not actual production version.
No really? I didn't know that! My apologies for being uptight. Oan telling how I feel about the rendering. I forgot to acknowledge the fact that this is a rendering. Smh.
Yes, and when Auto Express say it's an 'exclusive' image they mean they've cobbled it together. And why would Lexus give them any exclusivity? It's the usual motoring press speculation based on existing information. It might be more than 50% right, but if it's wrong, like weather forecasters, they never have to admit it.

Uhmm the official NX was kind of unveiled by Lexus..
I wonder if this 2.0 displacement makes its way to the CT. Would be a perfect fit for a pumped up CT F-sport. (I don't think making a true CT-F would make sense though.)

IMO, the next CT needs to have a sedan variant. You know what Americans like...
CT sedan? That was basically the HS and it failed miserably, haha.
HS failed because it was ugly (horrible proportion) and overpriced.

I see a lease for wifey coming. lol