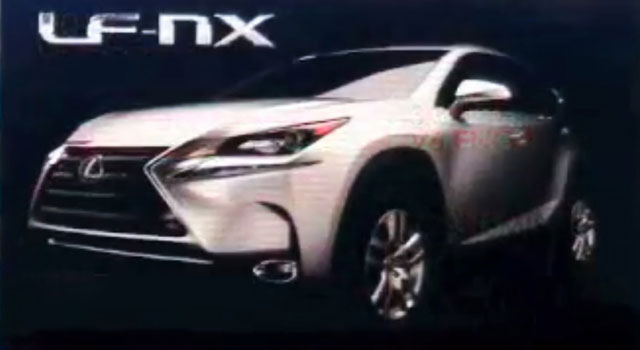 An unusual slide was shown during Toyota CEO Jim Lentz’s speech to the Society of Automotive Analysts prior to the Detroit Auto Show — while talking about Lexus in 2014, an image of what looks like a production LF-NX compact crossover was shown: 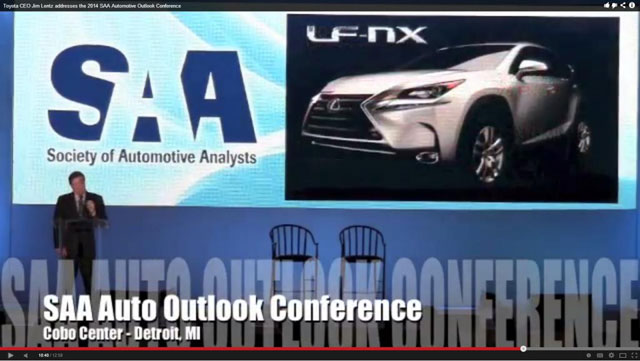 There’s little reason to doubt the authenticity of this image, which is good news — the production NX takes the wild concept and shaves away the excess, leaving an extremely attractive compact crossover.

The spindle grille has a very natural look, which is one of the bonuses of working with a brand new vehicle — it takes the current RX and improves on the overall design, integrating cues from the IS & RC models.

What does everyone think?

It looks awesome! They just need to release high quality official photos. :)
Finally, I've been waiting for this baby RX for a while now. This is my next vehicle.
Whoops! Possibly a mistake or something lately uncharacteristic of Toyota/Lexus, silent reveal in which no direct references are made to the actual vehicle. Reminds me of how Chrysler teased future mid-90s models in a 1992 documentary.
Wow was that an accidental leak or purposely leaked

I'm leaning towards a "intentional leak" -- surely, Toyota would expect someone to videotape or photograph this speech.

Please, no leaking on stage. Thank you
That SUV better have dual exhaust and Fsport, this might be my first SUV. Sorry RX Fsport!

Dual exhaust tips, that's what you care about?
It may seem minor, but it's a big selling point for me as well. I think cheap when I see single outlet exhaust on luxury cars. For example, base ATS with single exhaust looks horrible. I don't know why, it's a personal preference for me.
Now i know why every car these days has dual exhaust's! I blame it on the US market! Single looks much cleaner and there is no sense having a dual on anything under a V8. Really miss the old days when cars like the Supra RZ, Skyline GTR and Nissan Cima had single's.
And what's wrong with that? If acura and infiniti offers it why shouldn't Lexus?
Thats really what you care about? Exhaust tips?!!!
Why should I care about anthying else? I don't need extra power in it because my ISF has that, if I want a damn gorgeous car my IS350 Fsport has that. So, what now?
Why should you care about anything else than exhaust tips? Because it's stupid, thats why. Lexus' top of the line cars, the hybrids, dont even have one exhaust tip; you would cry.
Lexus hybrids (and some other brands as well) conceal the exhaust tips so as to perceived it as a "green" car. I personally find duals more attractive than singles especially in the luxury segment.
Thomas is an idiot.
Kid, get a life.
If you have a single bank of cylinders (the small CUV will be inline-4 only) and a single tube leading front to back, what is the point of making two exhausts? It won't increase performance and just add weight. Or take up space that could be used for additional trunk space or more gasoline or god knows what.
Hey, it's what I like so what's the big deal? We all have our preferences when it comes to certain things and that's what I like.
I think it's because I have a hard time with asymmetrical design, so exhaust on one side doesn't really appeal to me if I'm paying a premium price.
I agree. Looks better and more masculine. If they don't offer it on the regular NX, at least offer it on the NX-F or F-Sport.
Finally, someone that's on my page. These guys are ridiculous, I'm being attacked for that? Lol, even the Venza has the dual tip and I think it makes a car look more premium.
The 2010 Camry SE 4CYl had them as standard. So I dont see the big deal.
I can follow you, this is something I'm missing on my IS 300h. The exhausts are not visible, in order to visually distinguish them from a non-hybride. Pity.
Exactly my point. Nice car by the way!
Yes it is ! But an F Sport without exhausts, it's..... strange.

It looks actually quite nice and elegant like the 90s Lexus design!
Woah ! It's quite crazy in term of designs !
Reminds me of the Infiniti FX. But still looks great.
Oh no! Lexus is cheapening the brand with awful turbo-engines.

WTF isnt that what everyone (bmw m4/m3, cadillac, porsche macan, mercedes) is doing these days...Awful turbo engines without testing them yet seems quite an uneducated opinion.
So I guess merc and bmw did the same to their brand???
Yes, they did.

I really like what I'm seeing. The added visual aggression of an F Sport model would suit my tastes perfectly.
If this is really the final production model then why would the LF name carry on? On my mind, this car should be called the Lexus NX, not LF NX. #justsayin

Yes. That's strange!
Production car name will carry the NX 200t or NX 300h names. The video is making reference to the concept car "LF-NX"
Highly intentional. Not that I work for Lexus, but it's better to indirectly tease/unofficially reveal a future product and not make direct references to what it actually is. Lentz is not going to say, "Here's our new NX, that isn't the concept we showed you earlier." Having already shown the LF-NX concept, leave it up to the public to their own notes of the newly revealed differences and give no further details on your future products. It works better that way, until an official presentation.

A clever tease.
And Mr. Lentz is today still CEO? Then it was his job to leak this. The Geneva autoshow starts on March, 6...
Was seriously counting on the production NX to resemble more closely the concept. Sadly, many of the striking elements appear too softened or gone: 1. the shortened bottom spindle grill (like the base RX), 2. the round single projector lights (like the IS) - where's the cubic lights similar to the RC's? 3. The wheels are small and uninspiring in design, no where near the beautiful concept's wheels. I'm really hoping an F-Sport model is available with nicer larger wheels and a lower mesh spindle grill like the IS F-Sport or RC F for me to consider trading in my RX F-Sport. Finger's crossed
I expect the F-Sport version to look very much like the concept, with a mesh grille..... BD
Is it just me or does that front angle shot resembles the last gen Rav4?

Funny I had the EXACT thought come across my mind.

This is a Fake. Real NX will have 3 L lights as RCF but in line. Will be much more cool than this.