END_OF_DOCUMENT_TOKEN_TO_BE_REPLACED " /> Lexus IS F CCS-R Used as Secret Development Car for RC F V8 Engine | Lexus Enthusiast
Menu
Log in
Register
You are using an out of date browser. It may not display this or other websites correctly.
You should upgrade or use an alternative browser.

It’s been widely reported that the Lexus IS F CCS-R racecar was essential to the development of the new RC F high performance coupe, and now we’ve found out just how far this influence runs.

Lexus USA marketer Jim Lee announced on Instagram today that the IS F CCS-R that raced at Pikes Peak and the 25 Hours of Thunderhill was actually equipped with the new 5.0L V8 engine found in the RC F– he even posted a photo of the engine swap: 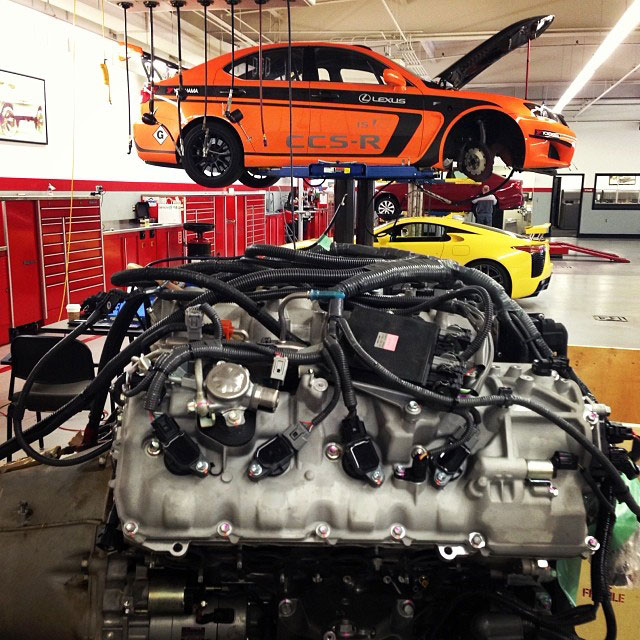 This is a stealth move, and really quite clever — in addition to all the secret testing that goes on, Lexus has now publicly raced this 5.0L V8 in two of the most intense racing events in North America. What a great piece of Lexus insider trivia.

Along with this surprising revelation is a brand new video documenting the Lexus IS F CCS-R racing at the 25 Hours of Thunderhill — really well done and worth watching:

This is a pleasant surprise, but overall not too surprised :). This is a classic Toyota/Lexus move here, doing secret testing when nobody expects it.

They pulled a Spaceballs on the competition and "switched to secret hyper-jets".

I wish that for once Toyota would spend a little time to make an engine not look like ****. Its a $70.000 car so i think that the engine shouldn't be hiding under a cheap plastic cover! What i love about cars from the 80's and 90's, you never have to be a shame to pop the hood. Just look at the 2JZ-GTE, 4A-GE 20v, 1UZ-GE, those are pretty engine's from Toyota.
That's why they are the best!
LIke how in the picture there is a one of a kind IS F, an LFA and a Corolla
Wonder what this means for that LFA Code X 5.3L V10 they fitted into the LFA, not so secretly doing the same thing for LFA-II?

Yes, code X is using a different chassis and suspension than the LFA. The wheelbase is longer for the code X. Also, ofcourse the 5.3 Liter V10 is a heavily updated version of the 4.8 Liter V10 where it can rev up to 12,000 rpm.
Tanahashi san said he is working on LFA 2 recently in an interview so yes, LFA 2 is under development.

So why did they detuned it to 416hp?
you have got to feel sorry for the M4 here. this engine been racing racing cars
Awesome video. The ISF sounds so angry. Great move by Lexus didnt expect that does look and sound like the RCF will have a very good motor
Driving the NX 450h+