END_OF_DOCUMENT_TOKEN_TO_BE_REPLACED " /> Lexus IS F CCS-R is the Benchmark for Future F Performance Models | Lexus Enthusiast
Menu
Log in
Register
You are using an out of date browser. It may not display this or other websites correctly.
You should upgrade or use an alternative browser. 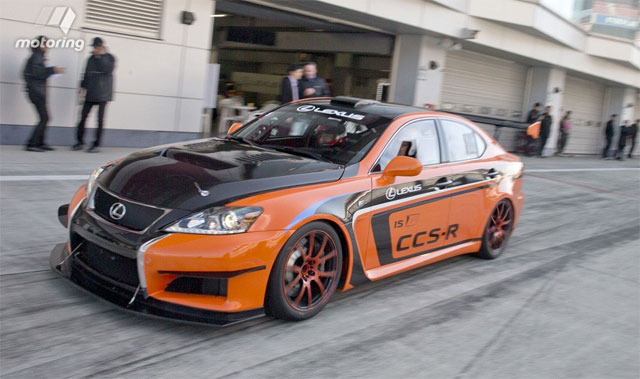 If you want a taste of the sort of handling and power delivery the new BMW M4-rivaling Lexus RC F coupe is expected to deliver then go and have a drive of the IS F CCS-R.

“Next generation model’s benchmark is this car,” Yaguchi said. “Handling and acceleration performance.”

“The racing car nowadays the suspension is softer and the handling is easier,” he said. “This car has lots of roll but still drivers can enjoy. The CCS-R uses special parts but our hope is to have the kind of direct handling this car has in mass production car.”

I drove the IS F CCS-R at the Fuji Speedway last month (full story coming shortly), and despite sharing the IS F’s engine and transmission, the race car was on a completely different level compared to the standard model — in my mind, using it as the template for the next F model sounds like a dream come true.

The Motoring Australia article also has data on the number of privately owned IS F CCS-Rs that have been made:

Hand-built in Japan – a process that takes up to two months – it is available for commercial sale at 20 million Yen ($210,500) plus delivery, is left-hand drive, not road registrable and is characterised as a car for ‘gentleman racers’.

Seven have been sold in Japan, two in Europe and one in the USA and it is available in Australia if anyone wanted one.

My question has be been answered Thank you Lexus.
I need ISF CCS now