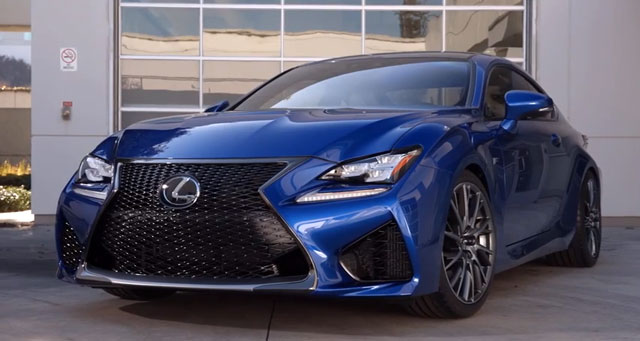 Along with the official photos, Lexus also released some footage of the new RC F — the video is a completely silent affair, and shows the coupe in great detail:

There’s a few choice moments in the video, including the speed-sensitive active rear spoiler in action at the 2:14 mark of the video — here’s a screenshot of the spoiler at full height: 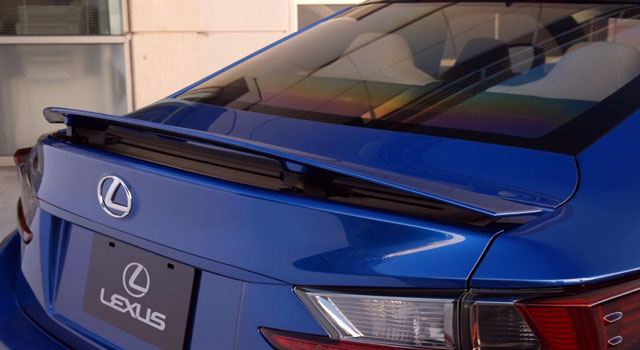 The footage of the interior shows plenty of new touches, like the carbon fiber insets and the special TVD button that optimizes the RC F for track driving: 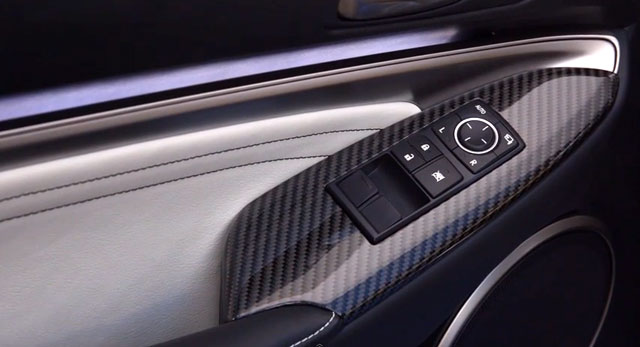 (Much like the standard RC in red, there looks to be something special about the exterior paint on the RC F — makes me wonder if the Ultrasonic Blue underwent a similar paint process. Then again, could just be the lighting.)

Just the wheel design not so sure of, but the rest.... WOW... drooool..... the smoked chrome spindle grill, the seats, the stitching, gauge cluster, real carbon fiber inserts, swede dash, and the retractable rear spoiler!!!

Yes the wheels got to go.... they are way too busy and they hide those wonderful big brakes.
There are 3 designs available for the wheels.
Well I guess that job should be done by VOSSEN WHEELS

Honestly, the RC F is better looking all around than I could have ever expected it to be. I can't wait to see the performance specs, watch the reviews and hopefully test drive one. 2014 is off to a good start
Love the huge Spindle Grille, but the rest of design/styling outside is awful. The interior takes fewer risks, but needs more color. Just a black dash screams cost-cutting, and these won't be cheap..... BD

I am surprised to hear you saying this, for me it is completely the opposite; it's the Spindle Grille I have problems with, the rest looks fine to me. As for cost-cutting, two things; one it's a Sports car and they are supposed to look like a pure driving machine even if that means bland or cheap looking; two maybe that will bring the price down so it will be more affordable than the likes of an M4. I truly on board with the RCF...
You must be kidding. The car is ridiculously good looking. Wait until it hits the road and everyone is going to be gawking at it as much as they do on the LFA.
I agree this guys are lost. This car looks angry and ready to race. When this hits the road the camera phones will come out !
Black doesn't mean cheap. You have no idea about craftmanship. The interior is the most beautiful in it's class in my opinion. Look at the 4 series, that looks a bit cheap!
The detailing on all four seats is equal to a one off concept.. Even the pedals went from predictable drilled to groovy modern art...

Well, they did exactly what I was hoping for so now I have to get one. :) Honestly anyone complaining about this interior has not been in a BMW because this thing is light years ahead; BMW's interiors are a decade old and ugly as hell. The RC's NAV screen looks a little small though.

2015 Model Year begins around September. So a 2015 RC-F may be available late this year is what it means. This isn't bad news by any stretch

Very pleased with everything but open cup holders and needs two-tone color dash. Other than that.......Absolutely breathtaking ! Silver for me Please !
Absolutely superb! Can't wait to work on it!
Looks like something that will hold the road quite nicely. This will be a nice highway-cruiser, for $80k, right? Though a similar AMG experience from Mercedes (C63 AMG Coupe) is in the same pricerange iirc.