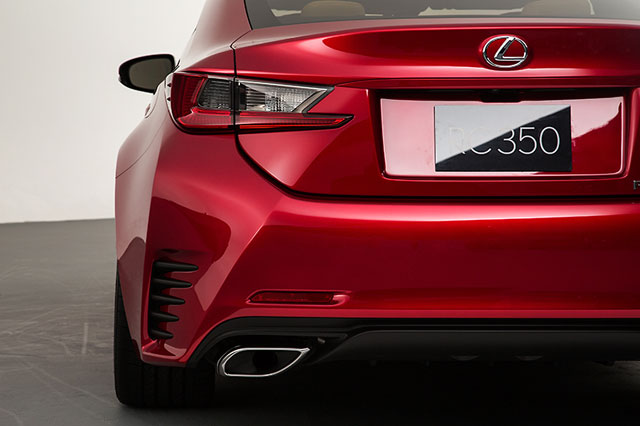 The Lexus RC 350 will make its North American debut at the Detroit Auto Show in January, and today Lexus released information on the new paint process used to create the coupe’s red exterior color:

The luminous red paint is achieved through a meticulous paint process using four base coats of paint which are then baked twice. Layers of colored and clear coating are used to control some of the color’s reflections and establish a balance between the brightness and depth – two elements that traditionally work against each other.

For the red exterior, the factory starts with a base coat of silver and then applies a clear coat. Then, the clear coat is covered by a translucent red coat, which is then topped with another clear coat. The four coats of paint are baked twice to set the color.

As a result, light hitting the paint reflects off the red layer and also off the silver layer below, which adds depth and a metallic highlight to the red coloration.  Prior to this new, two-color base process, the factory used base coats with the same color tone (red and red).

Having seen this new red exterior color in person, this elaborate process is well worth the effort — the combination of brightness and depth is unlike any paint I’ve seen before, and it’s certain to become the defining color of the RC coupe.

Great paint on a hot mess of a design. Hopefully, it will highlight sexier cars in the future..... BD

ha ha ha you can be excused for calling the IS "mess of design" not this car.
Best spindle grill and best new Lexus design. Sure it's not as good as 90's & 90's Toyota's --But these days no car is as good as they were. They just don't do them like that anymore..

Hope they change the grille, not concerned about paint.

Just hope that it doesn't scratch and swirl like crazy!
So this cars paint are like some women in the morning........
I hate how they go the extra mile on this paint job, -said no one ever
As i said before even before this article was released i noticed that this is the best looking paint finish this side of a none 3 digit car
This car is just perfect as it is. Most beautiful coupé next to Maserati GranTurismo. Wish the same paint but in blue.
you all just dnt get the RC
Can anyone translate this or find a english version? http://www.youtube.com/watch?v=Pj_4aJLM82I
Can't wait to see it in person. I wonder how it will compare with the current red with the glass flakes in the paint.
Haaaa, now I know the answer. I saw it in person. You have to.