During my recent visit to Japan, I had a chance to sit down with Lexus International Executive Vice President Mark Templin for a wide-ranging interview on the INTERSECT opening in Tokyo, the importance of design, and the emergence of the new Lexus personality.

Kevin: The first question — why did you choose to do INTERSECT now? What made this the right time?

Mark: Lexus has been developing all these new design-focused plans for some time, but we needed to make sure to wait until we were deeper into our new product rollout. We started with the new GS last year, and all these new products that came along.

Now, we’re starting to show some of these concepts like the LF-LC, the LF-CC, the concept we’re going to show in Frankfurt soon — it’s now a perfect time for us to start to launch some of these design projects.

It’s time to show a more emotional side to Lexus, a more fun side of Lexus — show that we have a personality. You might even see us make a little fun of ourselves for being so obsessive about quality and craftsmanship, the traditional hallmarks of Lexus.

That’s certainly a change from the usual. These past 18 months have made for an interesting transition, it must be exciting to create and develop the new personality of the brand.

I think that the personality that everyone’s starting to see now, it’s always existed inside of our organization. We just never showed it outwardly. Now it’s time to be more open and honest about what we stand for.

A lot of it has to do with [Toyota & Lexus president] Akio Toyoda’s direction. We’re now giving our designers the freedom to develop great cars.

Like in any endeavor, when you let too many people get involved in the creative process, it stifles creativity. When you have too many voices giving their opinion, and when you try to serve too many masters, it gets watered down. What you bring to market is not as strong as it should be.

Now we’ve given our designers the freedom, and we have fewer people involved in the design approval process. We actually have great looking cars. 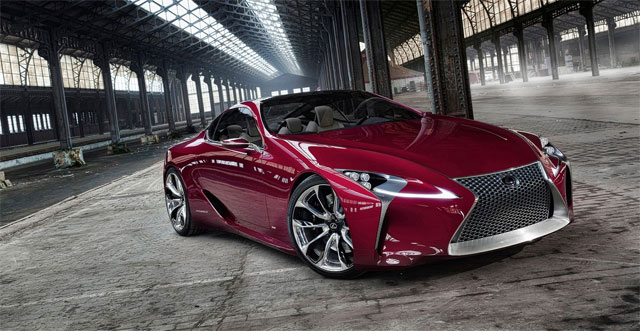 Is this “design freedom” similar to what you did with Masamichi Katayama [from Wonderwall, the interior design firm responsible for INTERSECT]?

Yes! When we decided to hire Katayama-san, we brought him in for an interview with Akio. He was able to see the car culture that exists in Akio’s office, and understand what’s in Akio’s head, his vision of where the Lexus brand should be going.

From that, and other additional interviews Katayama-san did with us, he designed INTERSECT very much like it is now, with very little tweaking along the way. 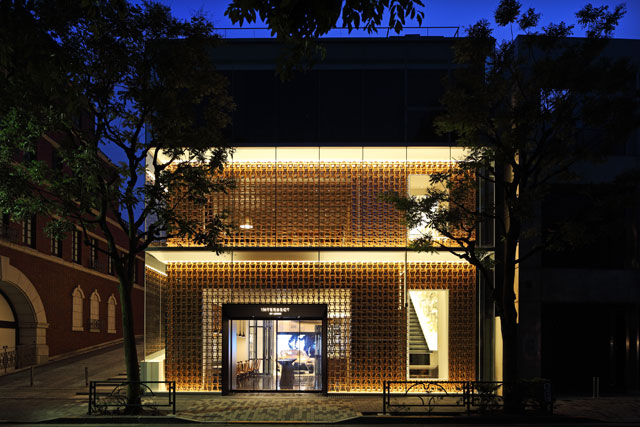 So very similar to how you are now developing vehicles…

Very much so. It was collaborative in the early process of gathering information, but when it came to designing INTERSECT, this is Katayama-san’s work.

There are several elements that will be used in every [future] INTERSECT — for instance, the wall of parts over there with the LFA parts on the stairwell, that’s going to be consistent. We’re going to do that with every INTERSECT.

The Garage, where we have the LF-CC, is a space for us to show a concept car or a specialty car of some kind. It won’t be a production car, that’s not what this space is about. It’s not about selling cars, it’s about building a brand and showing people what we stand for. 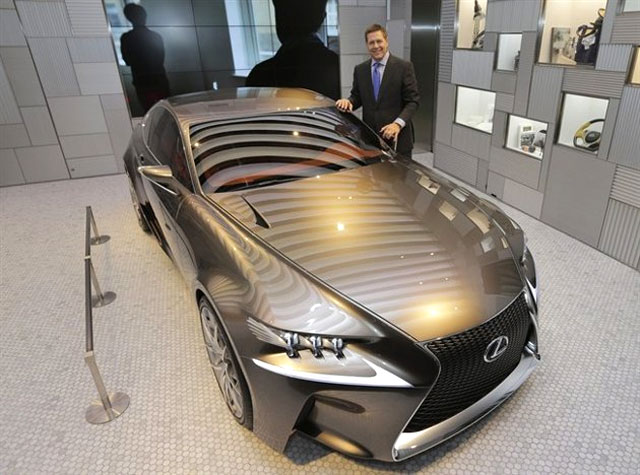 There are consistent themes, but we may present them in different ways to make it appropriate for the market. What we have here may look a little different than the [upcoming] New York [INTERSECT], but you will see common elements.

Katayama-san is going to design them all, so we can make sure we can create some consistency.

How does it benefit a global brand to have these exclusive regional spaces?

It does sound like a local approach, but New York, Tokyo, and Dubai are big international cities with a plenty of global travelers. They are also cities that host a lot of design-oriented events.

For instance, when people from all over the world come here for Tokyo Design Week, we will have events. When they have a design event in New York, we’ll host events. These people will come to INTERSECT and experience Lexus.

Between the lifestyle initiatives like INTERSECT, this big promotion of the Super GT Lexus Racing LF-CC race car — I suppose you could even include the new design language of Lexus vehicles — how do you ensure that it’s all cohesive, that there are central elements reflected in all of them?

We look at design, fun-to-drive (which is racing), and environmental issues, as the prime spaces for us. 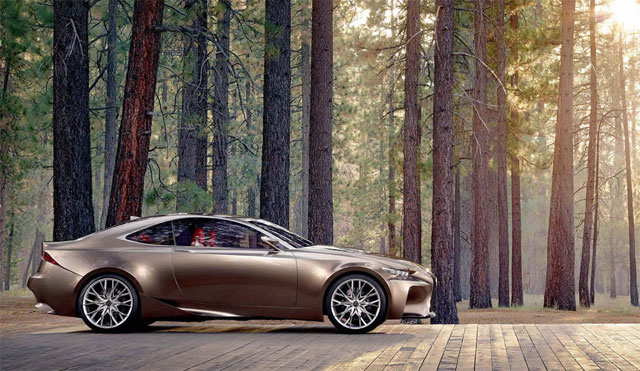 In fact, these are two pillars that Lexus has staked themselves around, design and the environment. We have a leadership role globally in the luxury space when it comes to environmental leadership because of our hybrid technology. Most people don’t realize it, but by 2014, we will have nine hybrids in the Lexus lineup.

Other luxury brands are bringing out their first hybrids, but we’ve been doing it forever. We have staked that claim in environmental leadership, and we’re going to maintain that.

The other piece is design — we’re supporting the creative community through design events, and giving our [car] designers the freedom to do cool things now, finally.

You can really see this when you look at the LF-CC, and the way it transitioned into the IS. There were fundamental differences — one was a coupe, one was a sedan — but you can still see a very clear line from the concept to the production model.

You’re making it sound like the LF-CC was a concept for the new IS. The LF-CC has a wider track, a different stance than an IS…

(Laughs) Sure — I’m definitely oversimplifying things. Still, there are some very similar lines…

Oh, from a design standpoint, I’ll give that to you. You’re starting to see some consistency across the lineup with a lot of design elements.

Even just with the prominent front grille, the swooping line — these are things I would have expected to eventually disappeared in the move to production, and yet somehow they made it to the final design of a four-door sedan.

You’re also starting to see respect for the performance aspects of your cars. That’s been a very impressive turnaround — only 18 months since the launch of the GS, and you’re getting a lot of good performance publicity from the major automotive magazines. I never would have expected that, no matter how good the cars are.

We knew that we could build a car that everybody would love to drive — we still figured it would take some time [to be recognized], but it’s happening faster than we originally expected. People are taking notice of all the changes.

We looked at our business a few years ago, and decided to go back to thinking the way we did when we launched in 1989. If we had a blank sheet of paper, and we were starting Lexus today, what would we do?

I don’t want to say that losing your leadership stake in the U.S. was a good thing, because it never is. At the same time, it gives the feeling that there’s something to fight for…

It’s interesting that people want to talk about that — when we launched Lexus, it was never one of our goals to be the biggest. That happened by giving customers what they wanted at that point in time.

When we started the brand, we asked luxury car consumers, what is it that you want in a luxury car? What do you need from a luxury brand? What are you not getting from the brands that exist in the marketplace? They were very clear — they wanted a high quality car. Nobody built a car that was quiet, nobody took care of their customers, and we capitalized on that. 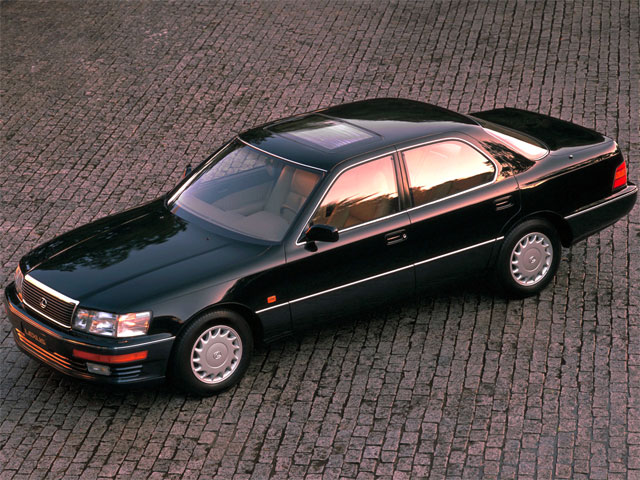 Our average buyer back in 1989 was 45 years old. They’ve grown up with us, and they’re still very loyal to us. Now, we’re looking at a whole new generation of customers — what do they want?

We had to go back and ask, what do you want? What’s missing in the marketplace? This new generation of customers still want all the same things as the previous generation, but it’s not their only priority. They also want cars that are fun to drive and are sexy to look at. We’re delivering that now. 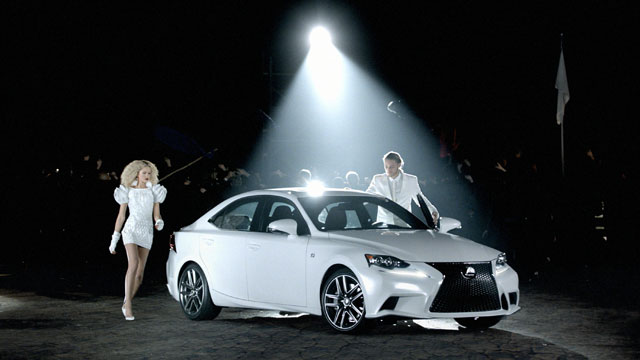 We never want to lose the core values of our brand — we always want to have great value, great quality, top craftsmanship, the best customer experience bar none. But we want to add these other elements.

Something I’m very interested in right now is the idea of Lexus as a multi-faceted personality. From an enthusiast perspective, we always want to be able to self-identify with the brand. The thing with Lexus now having this strong personality, it can be difficult to always see eye-to-eye.

We may do a lot of things that people don’t understand right away. When we started all these design projects, we knew there would be a lot of traditional car people that would say “what are they thinking?”

(Laughs) That is definitely what they’re saying.

All we ask is that they let it play out for a few years. We have a strategic vision of where we want to go, and we’re starting to lay the groundwork. It’s not the traditional approach to selling cars — this isn’t about incentives or selling as many cars as we can. It’s about building a stronger brand. 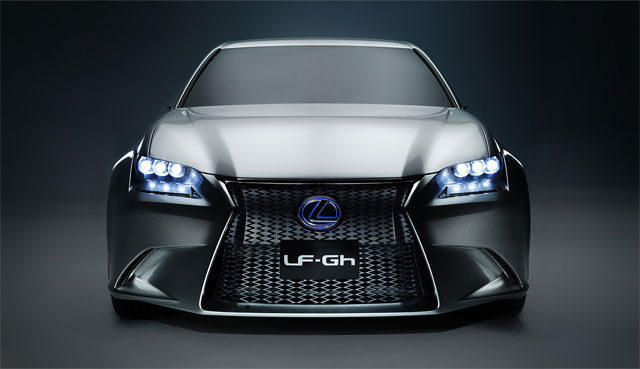 With your competitors, there’s a lot of talk about history. It’s something they’re very proud of. But what Lexus has been doing is something more complex — creating a personality from scratch is complicated. In a way, you can substitute that complexity for history.

Interesting to hear you say that — you’re right, we don’t have a hundred years of history. In many ways, we see that as an advantage. We’re not steeped in the old ways of doing things. We look at what we do as a clean sheet of paper, what should we do now?

It’s easier for us to think in a more progressive manner than another luxury brand that has a hundred years of history. We should wear this as a badge of honor — we’re new luxury, we’re not steeped in the old luxury. This allows us to do new things, take risks that other companies may not be willing to do. 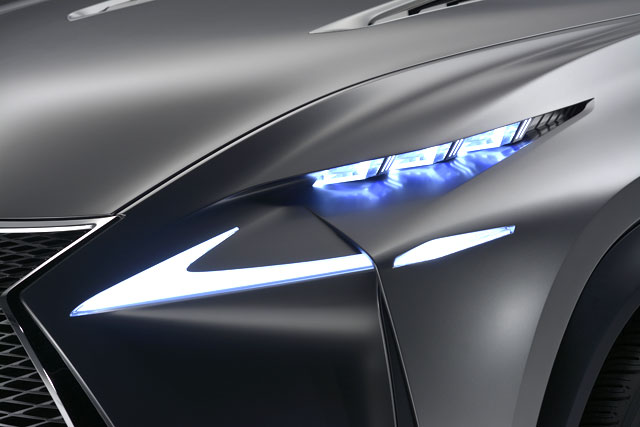 So, last question — I have to ask, what can we expect from this concept in Frankfurt?

We’re really excited, I can’t wait for you to see it. It follows the same kind of theme that we set with the LF-LC and the LF-CC — it really does give a good indication of where we’re going with design.

I think that many of the elements that you see in this new concept will show up in some future products. It’s going to be an exciting time for us.

I appreciate you taking the time to talk with me, Mark.

Glad you could make it to the INTERSECT opening, enjoy your time in Japan.

Special thanks to Mark Templin for spending some time answering my questions — now on to the Frankfurt reveal of the Lexus LF-NX!

Note: The photo above of Mark Templin is courtesy of Lexus International.

Superb read, thank you!!!
Mark is a great executive. Glad he's on "the right side of history"! Lexus says they're laying the groundwork for a great plan, and they aren't looking to sell the every car they can. THAT'S what a big-time executive SHOULD say about his luxury marque! Forget accountability to the stockholders. Build the brand, and don't sell out! BD
So in conclusion they want to sacrifice clean lines and designs to 'look' sporty..