END_OF_DOCUMENT_TOKEN_TO_BE_REPLACED " /> Lexus Reveals the LF-NX Compact Crossover Concept | Lexus Enthusiast
Menu
Log in
Register
You are using an out of date browser. It may not display this or other websites correctly.
You should upgrade or use an alternative browser.

Less than a week before its debut at the Frankfurt Motor Show, Lexus has revealed their LF-NX compact crossover concept.

Let’s start with the full press release (click on any image for a high resolution version).

A new Lexus mid-size crossover concept, the LF-NX, will make its world debut at the 2013 Frankfurt motor show, a study that explores the potential for this kind of vehicle in the Lexus model range.

The LF-NX reinforces Lexus’s leadership in hybrid power in the premium market, being powered by a new variation of the Lexus Hybrid Drive full hybrid system, tuned for SUV performance.

The powerfully sculpted styling reflects a further evolution of the L-finesse design language that influences the look of all today’s Lexus models.

The car’s frontal appearance is dominated by a strong interpretation of Lexus’s spindle grille and a signature arrangement of the front lights. The daytime running lights are given added visual emphasis by being positioned independent from the headlamps, in a similar fashion to the new Lexus IS. The LF-NX also displays a distinctive treatment of the front corners, which separate the bumper from the front wings with a sharp vertical cut line.

In profile, the LF-NX concept presents muscular wheel arches, edged with a black protective finish that expresses its urban crossover character. Above the pronounced diamond shape of the belt line, the side glazing is arranged in the classic Lexus profile, which works with the steep rake of the tailgate to create an athletic coupe-like silhouette.

At the rear the highly articulated lamp clusters project down the full depth of the bumper, creating a sharp, aerodynamic trailing edge to the vehicle that mirrors the detailing of the front wing design.

The concept is being presented in a new Brushed Metal Silver exterior finish that creates a striking impression of the car having been carved from a single piece of solid metal. 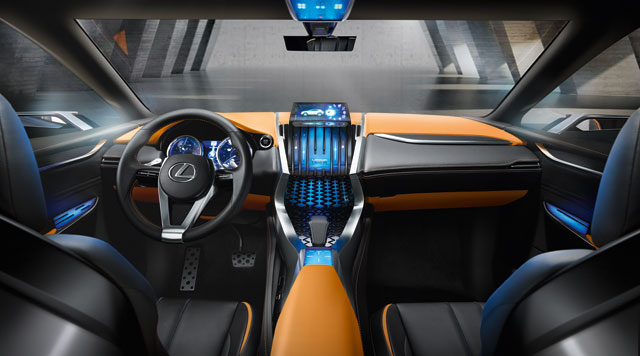 The interior mirrors the highly sculpted approach to the exterior with powerful forms and a highly ergonomic driver’s cockpit.

The cabin follows the “Human Oriented” element of Lexus’s L-finesse design, presenting a dashboard divided between an upper display zone and lower operation zone – a format perfected in successive generations of Lexus models. This enables intuitive interaction with the concept vehicle’s next generation technology, including touch-sensitive electrostatic switches and a new touchpad Remote Touch Interface design.

The concept’s status as a premium crossover is reinforced by carved metal surfacing around the interior, sophisticated blue instrument lighting and yellow and black leather upholstery with contrast stitching. 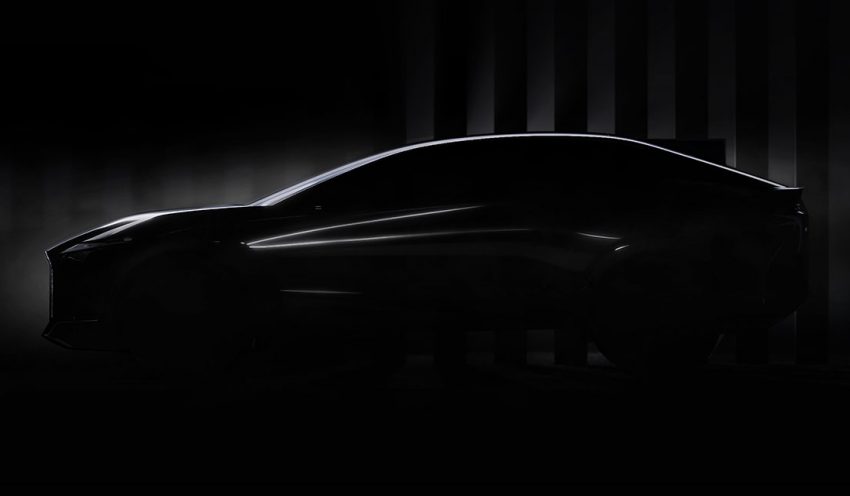 BrandingConceptsDesign
Major initiatives towards a brand transformation announced at the same time. 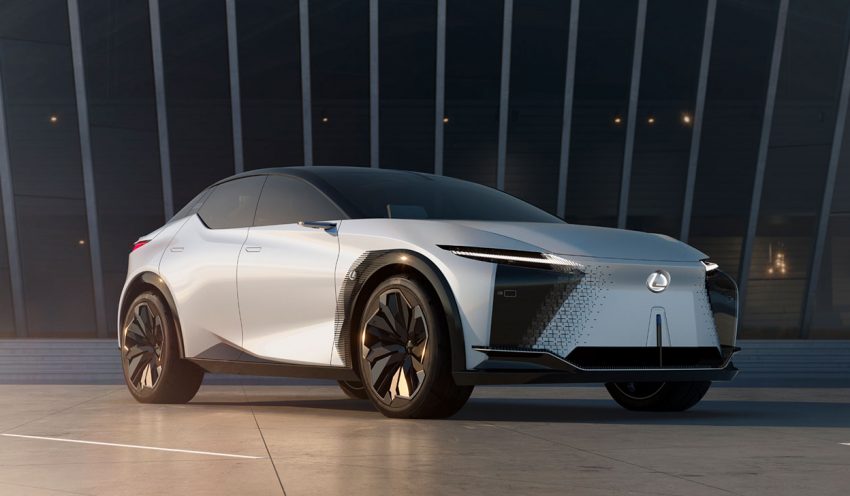 WOW! :-D
Well.Well.Well As I said it is a crossover and no one trust me :) I love What I see :p
Are you guys kidding me?!!! I feel its really ugly. I drive a 2013 GS and I really like the RX with the spindle grille. But this is all over the place. Looks like a Ford Kuga on steroids.

wow wow wow... That look sweet!! Front end is spot on. At the rear, the lower part of the bumper need work and from side profile that winglet on the rear door looks strange
So this is it! :-) Can´t wait to see this concept live at Frankfurt. Comes to Dealers in around 1 year or so....
It's good that's just the concept cause the front looks horrible. Be real here people. Look at those side vents to the fish hook headlights. This is ugly

lol i bet you took that from the Motor Trend video with the Q50 how lame
WTF? First before you put words into peoples mouth, I hate Johnny Lieberman after dissing the IS calling it ugly and rebadged Camry. Secondly, if you're talking about the fish-hook headlights, it wasn't MotorTrend who invented that 'word' so f*ck off. Those side vents make the car ugly, and the spindle grille needs to look as good as the GS, ES to get good reactions from people. Don't you hate it when people say the spindle grille is ugly? They haven't learnt from that..If you werent a Lexus Fan you will agree with everyone that the concept is ugly and I'm one Lexus fan who is going to admit the truth Grow up!

looks good! Very aggressive
this is in f-sport version and its this amazing caint wait what itll look in normal version
More (raw) pictures: http://andoniscars.blogspot.be/2013/09/lexus-lf-nx-art.html#axzz2dv8CZR4h
I also said that the previous teaser was a SUV, and so i also was right.. This looks awesome!! Gives the Evoque a run for its money.. I have a feeling that this concept is much closer to the final product than previous concepts..
Yeah, that is strictly concept, Lexus would never sell that....I mean nobody would ever buy that.
L-Finesse is dead! . . . DEAD!!! . . . Looks like Lexus has been visiting Cadillac's supplier of "cutting edge" steroids for which Cadillac is finally conquering their addiction. This thing looks like a badly wrecked vehicle. It is garish, crude, and about as un-Lexus as you can get. It is not "aggressive" . . . it is repulsive. Ugh!!! Sadly, I had hoped to replace our RX with one of these. God's death!

I agree! You can put som of the blame on the whiners on this blog who have demanded "aggressive", "mean" and "pissed off" looking cars from Lexus. They want no class. Sad days for Lexus and for us who used too like Lexus for exactly what it was and what it represented.

I think the bold NX will make the CT and GS look a bit dated. The CT's facelift shouldn't be too far off,but they may want to bring out a refreshed GS a bit sooner than normal.
Looks a little bit like Lamborghini SUV?
That crease/fake inlet looking thing on the bottom of the rear doors isn't doing it for me. I'm really perplexed about the center console, namely the remote touch area. The rear needs a slight bit of work, but still manages to look very good. I have mixed feelings about this iteration of the spindle grille. It doesn't look bad, but at the same time doesn't necessarily look good as on other models. Like it's too big for a vehicle like this. The rest is is cherries, especially that side profile (just not that crease/triangle/ wing thing).
http://www.topspeed.com/cars/lexus/2013-lexus-lf-nx-concept-ar160211.html More information about the car here. :)
"Pissed off, MAN!!" - Lexus LF-NX BD

I had a feeling pipled faced teenangers would like this. I dont! If you start saving now, and sell Your Daewoo, you might afford it in about ten years time.

Wow that thing looks like one of those big dogs with the buff hind legs. It looks super mean and maybe a bit too edgey. Although it looks better in those live pictures from Peter's link. At least the toned down production version might be perfect.
Too bad like everything else, the final product will NOT be a cool...
Notice the next big trend in vehicles of all types: an ever-increasing number of screens in the dash. So long buttons and switches of any type. The new generation that's growing up with smartphones, iPads and the like will go for this as a natural thing.
That's do ugly it mAkes the new IS look less awful.
Not a fan.
No words to describe. Stunning.
Sooo... Frank Gehry is working at Lexus now.... No one can say they aren't taking design risks now :)
The new STEALTH-BOMBER! @Lexus: Do not make the same mistake as Nissan with its Juke! Besides, this quite aggressive design makes GS, CT and IS looking old! Danger!
It's just very ugly. L-finesse is far gone! If this is the direction Lexus is heading - no directoin - then I wont bye a New Lexus again, ever. Lexus used to mean class. This have no class at all. Same goes for Mercedes, who have lost it too. BMW still makes some fine cars, though. Makes me a little sad to see this.
I FREAKIN LOVE IT! Lexus please incorporate as much of these gorgeous lines as possible into the production version. You're on a roll, don't stop! I love how you don't hold back. As a 6ft tall 250lb big dude, i can honestly say this is the ONLY compact crossover i would feel proud to be seen in :D
Are you really enjoying this? I really like all of Lexus latest design, really! But this is ugly beyond belief! This is the most horrible thing i have seen in this millenium. A mix-up of BMW X6, alien vs. predator and the latest Dyson vacuum cleaner.

OMG people its a concept yes its ugly damm yall act like yall buying the concept. yes its type ugly but cant they for one have fun with a design am sure it doesn't do any for you guys in the blog world and the magazine world but its nice such as the front end and the interior damm you all take things way too seriously

Yes, it is a concept. And it is ugly as a concept. Even if I look at it like a hand made piece of art, it stays just freakingly ugly. Compared to this Mick Jagger and Alice Cooper are really pretty! This is the automobile definition of as ugly as it can be multiplied by 100.