Lexus has just announced that a new concept will have its world premiere next month at the Frankfurt Motor Show in Germany — here’s the first teaser image (click for a larger version): 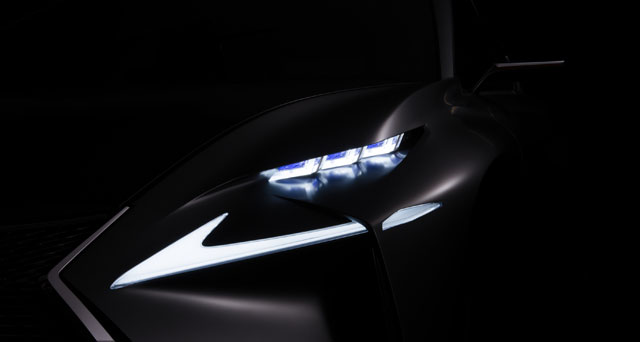 Beyond this photo, there are no further details on the concept — however, if we brighten the image up, interesting things appear (click for a larger version): 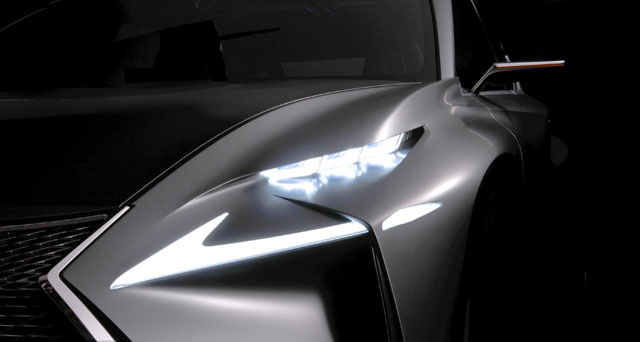 The perspective of the photo makes it difficult to gauge the size of the vehicle, but judging by the mesh pattern, the concept will be shown in F SPORT trim. The seat headrests are also visible though the front window.

All things considered, there’s a strong possibility this is a concept version of the much-rumored NX compact crossover — earlier this year, former Lexus International executive vice- president Kazuo Ohara said that a NX concept would debut “maybe around Tokyo [motor show]”, so the timing is about right.

Whatever it might be, the new Lexus concept will debut on Tuesday, September 10, at the Frankfurt Motor Show. Exciting!

Wow! Looks way so shark. That sculpted fender is a thing of beauty. If this is the NX, it will give a MB GLA a tough battle.
i think this will be the RC Concept..... EXCITED! LEXUS FTW!

We've already seen the RC concept in the LF-CC. This is almost certainly the NX in concept form.
I also thought of the GS F, but I'm not sure if that will be shown in concept form first.
My thinking (and I could be totally wrong) is that we've already seen the RCF being tested in Germany,and that looked quite production ready so why a concept? The GSF's design will likely be a more aggressive version of the GS we know and love,and this is something else all together,so logically it's most likely the NX in concept form. Again ;my reasoning could be way off the mark. Whatever it is,it looks amazing!
At first I thought it was either the GS-F or the RC-F however, having examined it more closely, don't think it is any of those. The character line is not consistent with that of either the GS or the RC. The line goes upwards towards the front and is more 'sculpted' (...if you get what I mean)
me too

The proportion of the fender and the belt line suggests a car not a crossover.

I would disagree. The height from the hood at the windshield to the bottom of the bumper appears too high to be that of a car. Also, the little bit of tire and wheel well seen suggests a heightened stance. My bet is this is the NX. Also my hope :)
Well, I would like to see the NX too. It would be logical for Lexus to unveil it here in Europe after the GLA is expected to be a hit. I hope they have something huge left to show in Tokyo a month later.
i have to agree. If you look closely to the side, there is only one door( this is a coupe). Since the RC/RCF is already in prototype guise, its almost unsound to think that this is the NX. I am thinking that lexus will debut a pair of future GS, 300h and GSF concept.
Good observation. It appears to be one larger door suggesting a coupe, but it could also be that the body curves towards the back and we don't see the second set of handles. I just think it's illogical to have (another) concept car of the RC when the LF-CC was the concept car for it.
Actually its not the handle bro, just look at the door panel. You can really see that there is only one door panel gap.
The LF-CC did not solely preview the RC. In fact, the designer's sketch of the LF-CC shows it was essentially a 2-door version of the original 3IS concept sketch by 2014 IS designer Masanari Sakae drawn in 2010. This concept is the direct preview of the RC/RC-F.
I don't know -- I see the door break in the window chrome surround, but the visible handle looks further back. Have to be honest, I love this stuff. Let's analyze this picture to death!
Krew, I think the door handle in not far. i guess its more like it has a curve body(sexy) thats why it seems further back. I think curving the body will accentuate that wide rear fender. Actually, after looking at the picture and comparing it with the camouflaged RC-F, I started leaning to the thinking that this is really the RCF. That wide rear fender is gorgeous thing.
It is definitely SUV/CUV. Look at the interior lights on the roof of the vehicle.
no its a sedan/coupe whatever :P

I feel it a cuv, yes And more logic to be the NX not the TX But I see a lot of Range Rover Evoque in this photo

The Evoque,it pains me to admit ;-) ,is a bold and exciting car to look at. It is,in it's class,the design yard stick.
you manage to see a range rover and all the rest of us cant even tell if its a coupe sedan or cuv must less all we see is a headlight :/

Wow, a teaser which does crashes our website layout. That's heavy ! :-)

Wow, never seen that before! All fixed now.
Almost there, see the page indexer at the bottom
That's part of a much bigger change -- huge website redesign later today. Sorry about that.

I think you're right. With all those camouflaged images of the RC, it's more then time to see a concept. Normally it's just reversed, isn't it ?
For Lexus maybe, but for other companies not so. Most vehicles will be testing in heavy disguise prior to the concepts, then shed more of the disguise after the concept debuts.
Definitely agree. RC or RC-F. They have been testing it and they're getting ready to unveil it soon.

Looks like a RCF coupe concept to me. The front door looks too big for a small crossover, and I only see one door handle. I also think the NX will come after.... BD
i think it is the RC because the seats looks too sporty for the NX and the side profile looks the same as the rc-f in testing right now...but whats the point of a concept car?? the production RC-F will be revealed later this year...and they are testing it right now....so it doesnt make any sence to have a concept car.....!!!

I agree, plus wasn't the LF-CC the concept car for the RC???
This wouldn't be the first time lexus puts out a concept after a vehicle had already been designed to spark interest. The CT, GS, and I think even the LF-CC were made after their respective vehicles were designed (IS/RC). As a way of sparking interest in a more conceptual format. Only the LF-LC was one designed as a new idea. I would normally agree the RC already was in concept form in the LF-CC.. But the RC-F has to be dramatically more aggressive than the RC350. Why not have a new concept, it costs them very little in the grand scheme since its clay/sheet metal with an empty inside and it brings people into the Lexus booth.
It wouldn't make any sense to have two concept cars. The LF-Gh was the concept of the GS and so as the LF-CC is the RC. The NX, GS F, GS Coupe could make more sense.
The LF-CC was designed to preview mainly the IS. The RC design was completed parallel to LF-CC development, but there are likely many cues on the RC from it.
I think it's the opposite. The LF-CC was designed to preview the RC while the IS took some cues from it. Quoting their press release: "The LF-CC announces the market launch of a mid-size coupe in the near future"
Correct. The design patents for each of the concept cars were filed many months after the production models' designs were registered or sometimes the same day. The LF-CC concept was the 2-door version of this 3IS concept sketch from 2010. Judging by the sketch below, you'll notice this. Actually, by 2011, the 2014 IS production design was completed and the LF-CC was designed in early-mid 2012. The 2015 RC production design freeze would've been in mid-2012, slightly before the LF-CC made it's debut at Paris 2012. The IS-F convertible mules give that away easily. The same for the LF-Gh design, which Toyota J.K.K. registered in March 2011. The production GS design was filed earlier on October 6, 2010. Both the LF-Ch Concept and production CT designs were registered on September 11, 2009, it's very clear Lexus creates them to either preview new models or future design cues/language. Virtually all Lexus models that have been previewed by concepts are developed before their conceptual variants, that are likely derived from the chosen design's initial sketches and prettied up in 1:1 scale for the auto show circuit.
Yeah, I've been thinking about that possibility as well, a preview of the RC F...

I'm thinking RC-F also. It has been anounched that it will have carbon fiber hood (which you see here), roof, and trunk lid.
I'd say there's a strong chance that it could be the NX concept.
This better not be another F Sport version of something. #smh #imjustsaying

Running out of things to F SPORT -- every single model in Europe has a F SPORT version.
Agree.

Mirror shape, hood angles, and A pillar lines look strikingly similar to the new Lexus Super GT vehicle.
the fender lines dont match up with the RCF spyshots. this cant be the RCF imo. GSF? the fender lines sure look like they match up...

It could the RC F but not the RC since it's based on the LF-CC although AFAIK Lexus has never showed two concepts for the high performance version and the normal version.
imo it cant be any RC because the lines dont match what we've already seen on the spyshots and the Super GT car. it would not surprise me if this turns out to be the GSF concept. lexus has trademarked the GSF name and we've seen a GS mule with F style stacked tailpipes so the GSF is definitely coming. this could be it...

Could this be the upcoming Lexus GS-F?
I would be disappointed if it would a "RC-F" concept....first the debut would be much better "fit" to the US market cuz there lives a big part of the consumer base for this kind of car. And the debut of the compact SUV - a new segment for Lexus - at Frankfurt would give Lexus a huge presence in the world media press.
different websites say the Name of this concept is LF-NX......
Check this out people http://www.pakwheels.com/blog/2013/08/22/toyota-prado-and-lexus-gx-facelifted-pictures-leaked/
the more i look at the teaser pic, the more i think its the GSF. it looks like a further evolution of the LF-Gh concept. http://www.nikeride.com/images/lexus-lf-gh-concept-new-york-2011-9.jpg
why no one think that the NX may be introduced as 2 doors in its concept version
SUV. Hood is too short and slopes downward too quickly for a coupe. I bet NX.
I need a job at LEXUS!
Lemme guess... that may be the RC.