A Lesson in Lexus Design

Forbes writer Matthew de Paula has published an excellent interview with Tokuo Fukuichi, chief of design for Toyota and the man responsible for the new Lexus design revolution — the entire article is worth reading, but there’s one passage that I found particularly interesting:

…as distinctive as the new spindle grille is, Fukuichi is not overly attached to it. “Maybe we should change the shape in the future,” he says.

It isn’t that he doesn’t like the look. It’s just that Fukuichi is not one to get caught up in a particular styling detail for its own sake. He believes design needs to keep evolving. “Regarding changes in design, no one has 100 percent confidence,” he says. “No one can really say with pure certainty that, ‘In two years, this will sell well.’”

This makes for a surprising insight — using the spindle grille on all Lexus models was not just a design decision, but indicates a huge shift in the way all design decisions are made. Lexus is prepared to continually reinvent itself.

…[Fukuichi] has at least one guiding principle for everyone: each Lexus car design must have the “J-factor.”

He pulls up a slide on his iPad to illustrate: it shows a white circle and a red square. They represent opposing ideas seemingly in conflict. 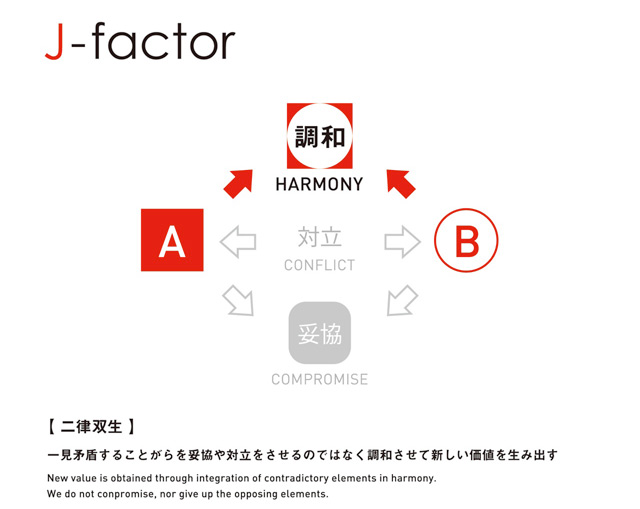 The Western way, he says, would be to favor one over the other and end up compromising on both. He points to a diagram of a gray square with rounded edges to represent the compromise.

Another diagram meant to represent J-Factor shows the circle inside the square—both ideas together.

This is a great way to demonstrate the design philosophy of Lexus, two conflicting elements coming together to form a balanced whole — what a brilliant illustration.

Read the rest of the Fukuichi-san interview at Forbes

Hopefully this means that the spindle grill won't be around for very long.  I never was a huge fan of it.   I thought the subtlety of pre-GS spindle grills (CT, LFA, HS, RX) were just fine.  I was okay with it on the GS.  But when they started to put it on everything, I started hating it.  No LS owner want's their car to be confused with a GS or IS.  Not only are the Lexus vehicles losing their identity to each other (like so many other luxury brands), but Lexus seems far too proud of a design feature that doesn't even look as good as they think it does.

Don't be so melo-dramatic.  The "kidney grille" doesn't have that effect on BMWs. BD
Agreed !    BMW does NOT grab attention from their Kidney Grill------the Circular light rings around the headlamps are dead give away, long before the Grill is even noticed.     The light rings all look alike.  Low end or High end models.
I for one doesn't think any Lexus at the moment look like any other Lexus only thing they share is a design theme with the spindle grille and no two spindle grille are the same. I for one think the spindle grille was a great choice to choose as there face of Lexus; it offers sp many different design philosophy and I can see what, he's talking about that's why they will never focus on one grille design because each car although a spindle grille the design will always be different... Audi KIA BMW Hyundai (who steals everyone design) Aston Martin and everyone that has a grille can't say that!... And for the comment up above dude if u think the GS LS or IS look alike then idk what to tell you...
To add to that if you arnt proud of your own work then that said something about your work.. Spindle grille is a work of art it can be very sporty or very luxurious
As a Lexus fan, I can tell the differences between the models.  But that's only because I am a Lexus fan.  To the uninitiated, the first thing they see is the same grill design on every car and will likely lead to mistaken identity.
I have to completely agree with V12mind  I own two lexus vehicles, but won't be getting another as long as that horrible design continues. I don't like BMW's for that same reason.  Luckily the LFA doesn't suffer that design. I was hoping they would continue down that road instead of this spindle grill thing.  I'm also very disappointed with the interior. The dash changes are fine but the seats are horrible. In my cars, the seat are finely upholstered with gathers and stitching that looks expensive and elegant, while the newer seats are flat pieces of leather that offer nothing resembling luxury, other than the fact that they are leather.
All Mercedes are getting that new, ugly bulging grille that you see, from the $100k SL to the new $29k CLA Audi pioneered that gaping hole.  Cadillac has their obnoxious shield grille on everything.   Grilles are corporate branding tools.  You can't run away from them.  So crying about them makes little sense...... BD
I agree with you on that.... Cadillac's grill is hideous and Mercedes is ruining their models with that grill. The old SL was gorgeous. The new one just looks odd.
LEXUS has done an incredible task of giving their product true identity----this new grill will only catapult sales into high gear.  Another remark from someone that probably complained about boring and no style LEXUS. Only to counter it with losing identity now.....If you see MB, Audi and BMW coming head on towards you, those are the worst. Unsure if it is the entry level model or high end model.   LEXUS has captured a unique style that shares the spindle grill, but entertains a different movement of design in the front end.  LEXUS should be proud of this design.  The 2013 models I have passed on the road are distinctly unique and catch your attention......just what it is meant to do!
I have never complained about Lexus being boring or no style.  I've been a fan since the first-generation SC which was a very handsome stylish coupe in its own right.  You have to think of it from the perspective of someone who isn't into Lexus or cars in general.  Someone that doesn't visit Lexus Enthusiast or other car blogs.  You yourself have mentioned when a MB, Audi, or BMW are sometimes hard to tell if it's an entry level or high end model.  I fear that this is what may happen with Lexus.

Notice he mentioned whether it sells well.  That's always the key. There is really only one way to tell if a car's design is working or not.  Will customers invest in it.  The RX & LX saw a nice spike in sales through last year, just with a refresh and the new grille.   The People are supporting it with their checkbooks.  At the end of the day, that's all that matters..... BD
Some people will love it, some people will hate it. That's what happens when you make bold changes. The sales numbers have already looked good for the GS, ES and CT. The IS will probably sell well too compared to outgoing model.
Lexus corporate face isn't like the Audi and BMW where they all look the same The Lexus implementation is very neat and has mild to subtle variation between the models..
Driving the NX 450h+