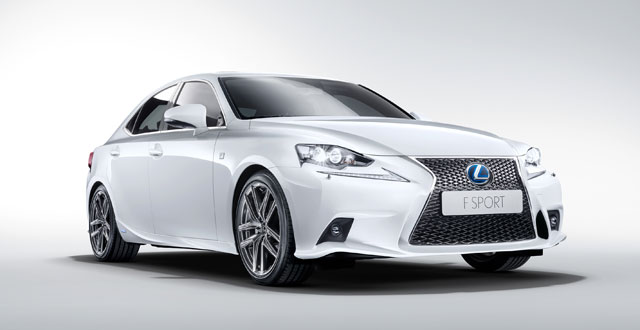 Lexus Europe has released an extensive photo collection of the IS 300h in both standard and F SPORT models.

Lexus general manager Mark Templin announced the performance numbers of the IS hybrid during his press conference in Detroit last week:

While we can’t disclose actual numbers until later this spring, I can tell you that we’re targeting CO2 emissions lower than 100g/km and fuel consumption of less than 4.3 liters per 100 kilometers – while delivering total system power of 162 kw.

Translated to U.S. figures, the IS 300h could return 54 mpg with 218 total system horsepower, all while keeping emissions under 110g/km — exactly what the brand needs to start making some inroads into the European markets.

(Big question — how do we convince Lexus to bring the IS 300h to North America?)

A black 300h F SPORT is what I want. A shame I will have to move to Europe to get it.

TOTALLY AGREE, they don't want to import it just because they don't want to cannibalize the ES300h sales, but the ES is just an FWD based on the Avalon, what's the ES got to do with the IS wich is much much much "more Lexus" than the ES??? I really don't understand.
What is the big problem? Buy it in Europe then, and import it yourself. I reccomend Germany. In Europe, private import from USA is pretty common, so why not the other way round?

You convince them the same way as you did with the CT200h, Lexus USA seems to listen to their custmorers. The European question is: How do we ever get the IS350? Taxes make the IS350 to become quite expensive in Europe, but that also goes for BMW, Mercedes and Audi, and they seem to sell the 335i. A4 3.0TFSI and C350's...

And that's a real shame, i can understand the 3er cuz is a beautiful sedan and actually sporty, but the A4 wich is just an overpriced VW/Seat/Skoda with a dull bodyshell, FWD and understeering just like any crappy audi (quattro or not doesn't make difference) don't deserve to selll so much (not to mention the low reliability and the resale value wich sux even in EU if it's a sedan, only the avant version keep the value).
I loathe Audi myself, and I got some heat from saying so. Fun!
Both of you "Audi haters" get heat because your comments are  so biased and simply untrue. And, Bramante164, you claim the Audi A4 does not deserve to sell so much simply because it is FWD and understeers? Well by that logic we should be slamming the Lexus CT, ES, HS and FWD RX models as well for understeering. I guess they also don't deserve to sell in huge numbers, eh? You two need to grow up with your anti-Audi stance.

Any chance that they are going to produce the IS 300h in Europe ?

As in manufacture it in Europe? Zero chance of that happening in my opinion. If Lexus decides to move more production offshore, the US and China will be well ahead of Europe I would think.
Agree, Europe is in completely decline and even generalist like ford and especially gm with opel are thinkin about to quit the euro production, ford is unlikely but gm is going down more and more year after year with opel (aniway opel are garbage so i'm not surprised if europeans are no more interested in them today).
As I am in UK where we have right hand drive cars the same as Japan, I am happy to let those smart guys build quality cars for us. For your info even though we are a small country, Toyota, Honda, and Nissan have very large manufacturing plants in the UK. So no we wouldn't want GM
The UK-built Japanese cars are excellent! The Brits can be very proud of themselves! :-D
Hope not! Quality would hit bottom.

If Lexus USA convinces TMC that hybrid is really important for their markets, it could be a major step forward to be able to put more engineering resources on multiple hybrid engines, very much needed for the European market with Lexus Hybrid Drive as an anti-diesel weapon.  Even if the engines are easy to implement, for the moment we can only dream of extra up-size models like a CT 300h or an IS 450h and extra down-size with RX 300h or LS 450h...

The CT with more powerful versions (300 and 400h) will be available only with the all new generation scheduled for 2017, there's no space enough under the current bodyshell wich is already very busy with the Prius powertrain.

Very excited to see what lexus does with the next ISF. Just the fact that they are continuing to sell the 1st gen ISF even as the next gen chasis is rolling out shows their commitment to the ISF. Now, lets just hope the GSF comes out!

I'd like to see in the next future from Lexus these following models: Small Suv very sporty,similar to the Evoque,a coupe version of the RX (wich could be difficult to develop cuz the normal RX has already a coupe shape aniway we can try), a small coupe with 4 doors based on the GT86 with hybrid powertrain of course, a streamline coupe 2 and 4 door based on the next LF-LC.
I am puzzled by some of these internal pictures. If the 300h F Sport is a CVT, then how can it have paddle shifters? I thought the internal pictures we have been seeing are of the IS350 F Sport which will have paddle shifters linked to the 8 speed box. Correct me if I am wrong.

They've had paddle shifters on their Japanese CT200h's so it wouldn't be the first time.
Correct.  GS 450h has paddle shifters, too.  Some of the journalists mentioned this already in their 'prototype drive' article: apparently it is more interesting to use in the new IS with some artificial built-in sequences...

If you want the 300h, just don't buy the 350. I really do not understand why they think the ES300h and IS300h would be too similar, but the ES350 and IS350 can exist together. More so, because the cars are very different: FWD ES, vs RWD IS, family car, vs sporty car, Toyota rebadge vs own development. They are strange people them marketeers.
This car looks H O T.  Much better looking then its rivals. Even the interior looks good... I think im looking at my next car payments !
Great looking car, I have but one complant...WTF no electric parking brake? This foorpaddle from the parking brake is really annoying. Even in my GS let a lone a smaller car it's just in the way and outdated. Missed opportunity Lexus..... Euro specs are available on the lexuseurope site
Why not full beige? Why not more wood? :( BTW, awesome car!