In honor of the last-ever Lexus LFA, Akio Toyoda visited the LFA Works at the Motomachi Plant in Japan — here are some photos from the event: 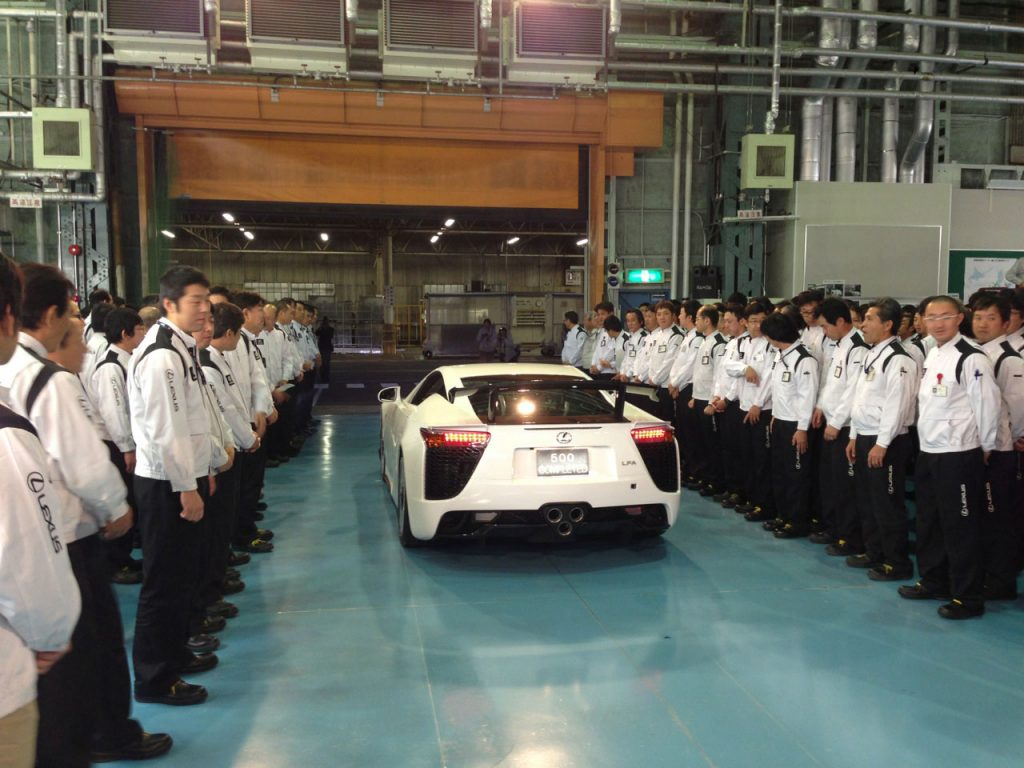 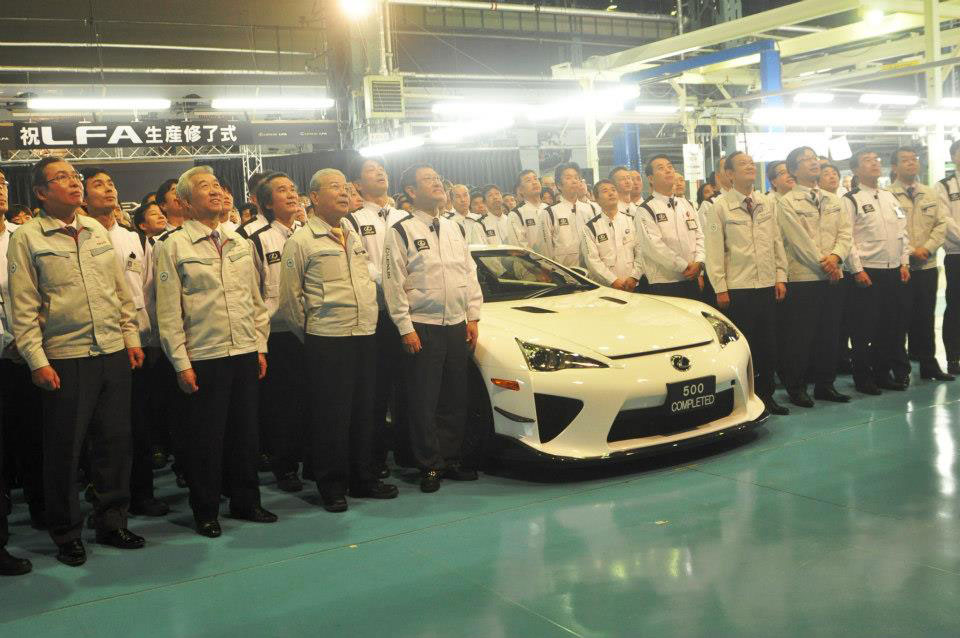 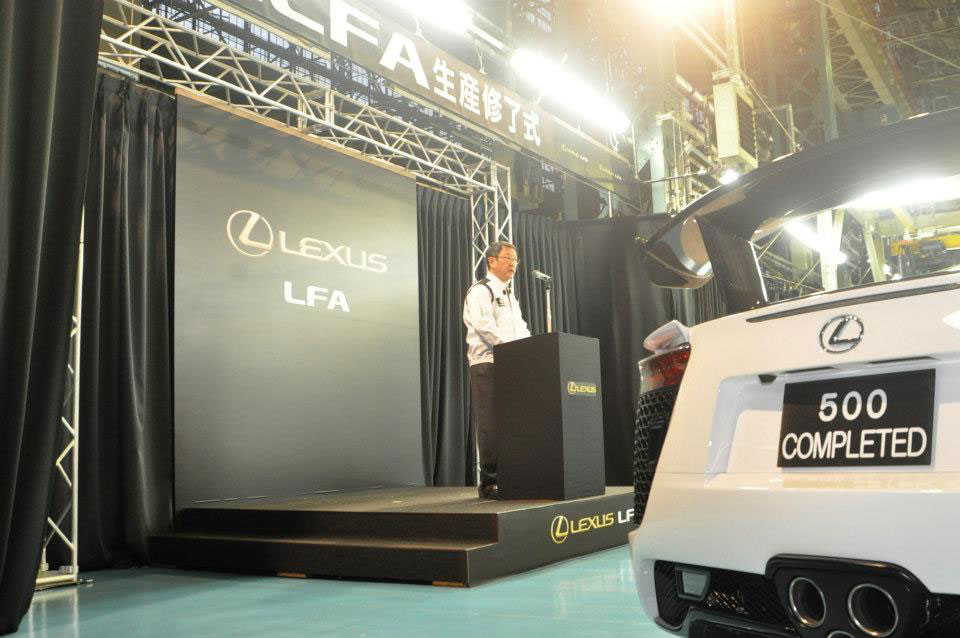 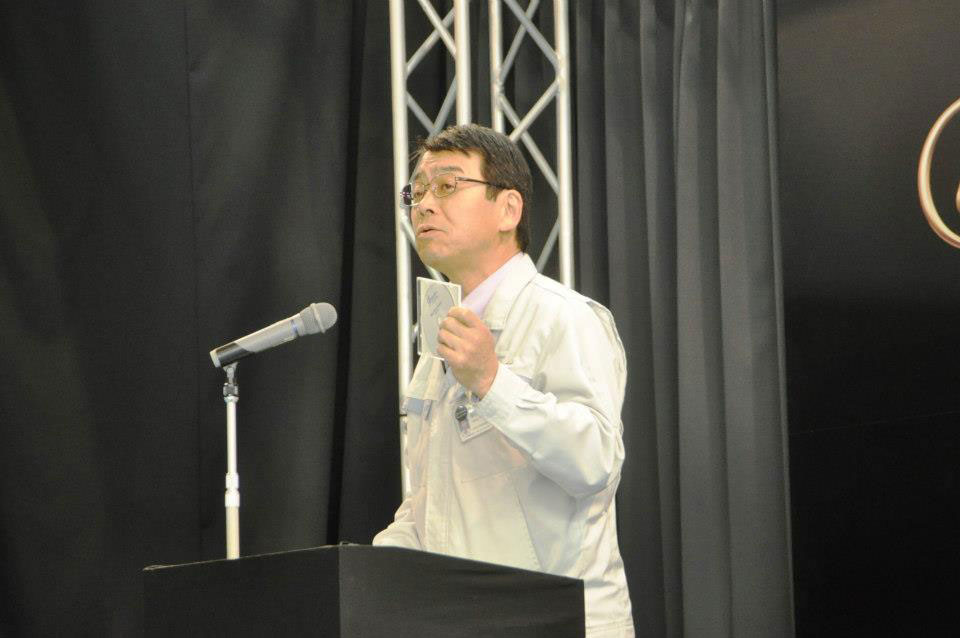 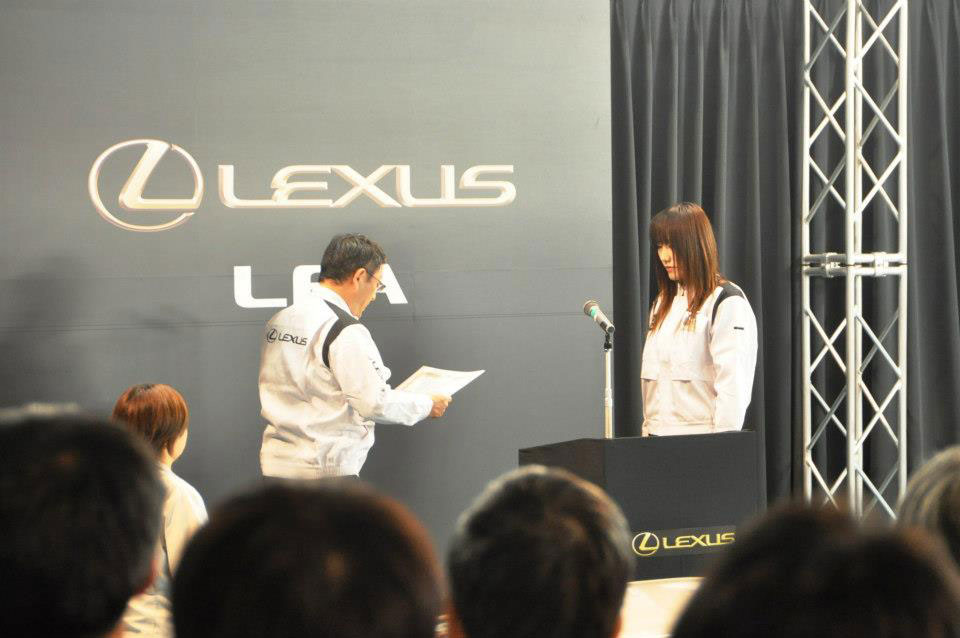 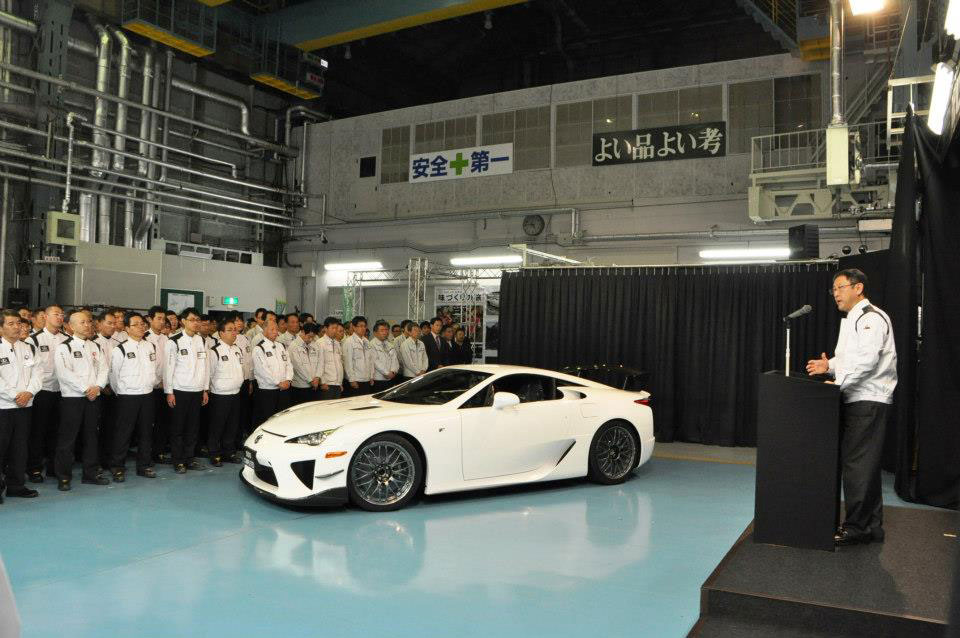 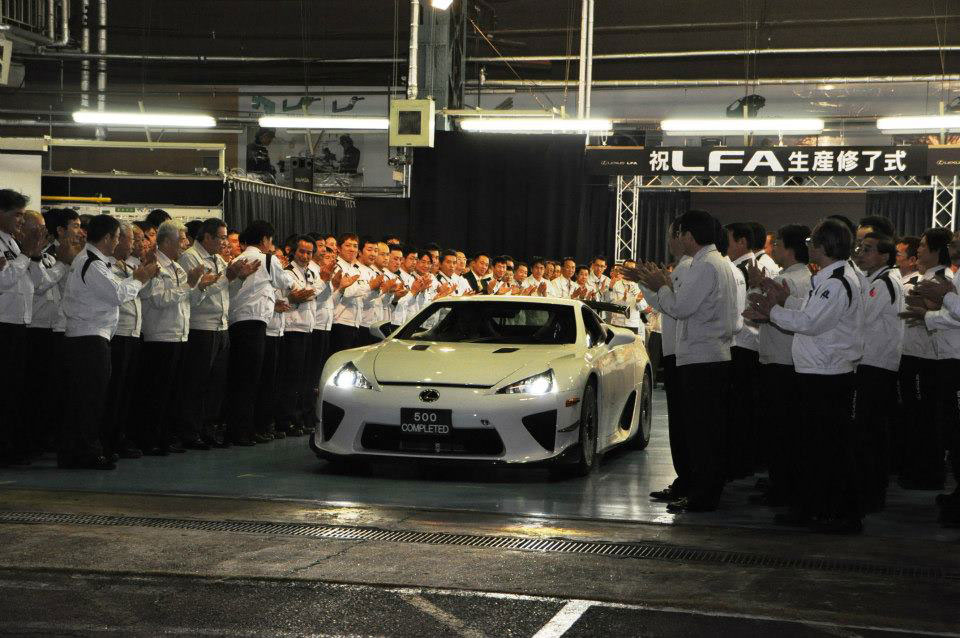 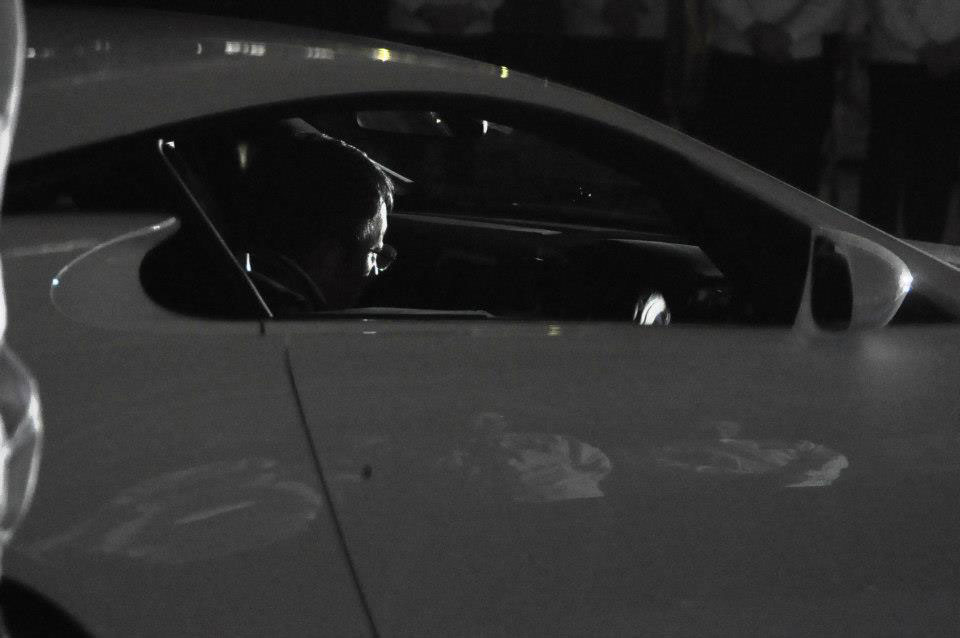 I really liked this photo of Akio sitting in LFA #500 — it appears he’s contemplating, deep in thought: 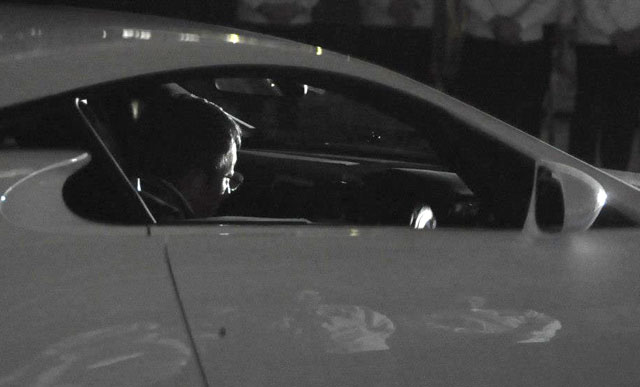 Seeing the LFA complete its 500-unit run is a bittersweet way to end a very positive year for Lexus, but I’m encouraged by this passage in an earlier press release:

Future Lexus vehicles will reflect the technological skills gained during the development and production of the LFA — in particular manufacturing know-how for carbon fiber reinforced plastic parts — as well as a philosophy of car design for delivering exhilarating and stimulating driving performance.

The LFA will indeed live on — there’s a touch of sadness to see the end of something so special, but there remains plenty of excitement for what’s yet to come.

The big question for me is, what does Lexus do with the gigantic carbon fiber weaving machine that they made solely to build the LFA. They can't let that go to waste. My New Year's wish is for Lexus to be hard at work on a hybrid V10or12 LFA 2.

Good forbid V12. Lexus had rejected V12 design because it cannot respond nearly as quickly to throttle changes as a V10 can because the V10 design can have far less reciprocating mass (and hence, lighter internal) and could rev much higher to the 9500 rpm target rpms LFA wanted. The sound of the LFA V10 will always be superior to that of a V12 because of a denser, higher pitched shriek. Case in point, either a V10 LFA or no LFA at all.
I was not chastising the LFA for having a V10 at all. I agree that the Formula 1 sound of the LFA is arguably one of its biggest selling-points of this remarkable car. However I'm thinking down the road. It wouldn't hurt Lexus at all to produce a gigantic V12 GT car like the AM Vanquish, which still sounds like pure terror at 67500 rpm, or the F12berlinetta at 8250 rpms.
I don't even want to imagine what an engine running at 67500rpm sounds like....
Google it. It's on Youtube. Sounds like an angry pitbull.
V12's do not require crank counter balancing though, as they are naturally balanced, where as v10's require counter weighted cranks. I don't think that the reciprocating mass would be that much of a difference to be honest.

It's kinda like high school graduation with that song Graduation by Vitamin C. I'm sure Mr.Akio has something up his sleeves!
Hard to believe this day has come-almost seems surreal.I agree with you KREW that Akio appears to be in deep thought and I hope it's a sign that he's thinking of other such endeavours in the future...there will never be another LFA though.
The LFA accomplished 3 things that Lexus sorely needed: 1.  It brought an international level of respect for their ability to build an elite car, able to challenge the world's best.  In fact beat the world's best.  Again.   2.  It showed that Lexus knows how to make cars that entertain, even seduce, it's owners, with it's desirability. 3.  A technological tour de force, what was learned in it's construction and development will live on, in however small ways, in all future Lexus vehicles.  How to be bold, be passionate, and just have fun! While also being the paragons of quality and refinement that they all are. At least, as long as Akio is in charge. The LFA will be seen decades from now as the point where Lexus became a mature, sophisticated, global luxury brand, and not just some American oddity. If Lexus were a musical composer, it would be Amadeus Mozart.  Not as respected in it's day as it will be in later times.  Lexus is an acquired taste, but oh so sweet to the discerning palette...... BD

So awesome yet so sad.  Lexus need to make a book on the LFA I will def buy one no matter the price !
The journey continues! Can someone say mega-factories episode... I would watch.
oh methinks the LFA was only phase 1 - these super engineers can't sit still reminiscing on the past ... they will begin to stir in time ....just you see!!
Well, the LFA is a piece of art with brush strokes of great handling, acceleration, braking, unbelievable performance, spine tingling sound and beauty beyond words. To really understand and fully appreciate this car one has to drive the car on a track like I did at Nurburgring at 180mph and then pull off the track and drive it 40-50-mph on public streets---then and only then will you know what this car is all about.The greatest car I've ever driven and owned. Congratulation to Lexus and Toyota for building such a great car and making such a commitment to the future of your cars for years to come. I know and appreciate this car as much as anyone in the world !!!!   Owner LFA #003 & #499--first and last cars in US.
I think some of that tech goes into next gen supra...
TX 550h+ Trademarked