Japanese blog 昔の名前で出ています has posted images of an updated Lexus HS 250h set to launch in Japan by the end of the month — here’s a shot from the rear: 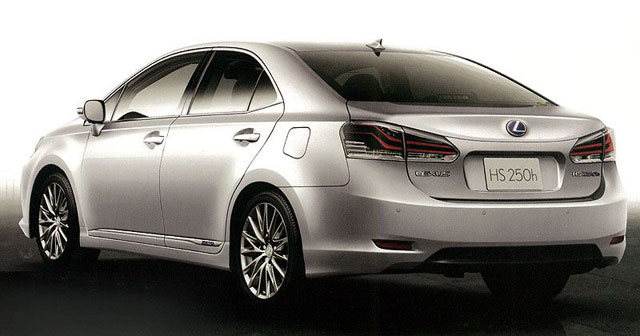 While much of the HS remains unchanged, the new spindle grille is attractive and surprisingly effective in changing the overall look of the hybrid sedan — also revealed was the updated interior:

Overall, this is a drastic improvement for a model that had a hard time fitting into the Lexus lineup — however, after the HS was pulled from North American dealerships earlier this year, it’s unlikely to be offered outside of Japan any time soon.

That's actually a very large improvement to the north american discontinued model! I would actually consider one now, but if there is an ISh coming to fill in the gap between the CT and ESh I don't see the point.
A very nice improvement, and the new grille is much better integrated than the Lexus ES. I'm never going to see an HS again, but...... BD

Agreed. This is what the ES's front end should've looked like, instead of the awkward snout.

Woot! Lexus never gives up!
The new front end resulted brilliantly from this perspective. Although the rear end, specially the tail lights, need some improvement. But the new ISh and maybe a new CT250h!?!? would fill the gap perfectly.
I too like the front end. Makes the ES, CT and even GS grilles look a bit half hearted. Hope the new IS grille looks more like the HS...
I like it. Too bad it didn't look like this before it got discontinued in the USA.
The front looks like LS F Sport.
Better looking outside, but the inside is still bizarre IMO

ya i agree... i am not feeling the floating centre console

I'm no fan of the exterior but it does look better than the original HS. The cabin materials look superb but I find the design far to busy.
It's still ugly! Sticking the all new and improved front grill on it makes the car look like a bobble head doll almost. Very wierd looking.
Looks a thousand times better!
New HS?  When will the this nightmare end?
MY WORD. drastic change the car looks 10 tens better with this face... hell the new lexus grill i think looks best on this car then the rest of the lineup... this grill has much more detail
I love it <3 Best rendition of the spindle grill by far, loving the detail of the creasing hood continuing down the grill! Much cleaner than the spindles on other models imo but find it ironic the front of this lower model now looks arguably more aggressive than the GS and even the LS F-sport. Maybe Lexus is hinting they're gonna throw in the 2.0 Turbo engine into this baby :-P The rear end needs a bit of work though, I find it a little too rounded out and bubbly vs the front end. And what's with the trapezoidal fuel door for some reason it just doesn't look right :-/
bring small quantities of them to north america and call it Ct250 sedan.
I wanna see what can Lexus do on CT200h !
Driving the NX 450h+