The Lexus LF-CC: Next-Generation IS or GS Coupe?

Ever since the Lexus LF-CC was announced, there’s been confusion about what production model it will eventually transform into — more to the point, is it the next-generation IS or a GS coupe?

The uncertainty started with the original press release, which referred to the concept as a mid-size coupe (GS-size), only to suggest it will also be part of the European D-premium segment (IS-size).

Normally, this mystery could be solved by consulting the vehicle dimensions — today, the first-known specifications of the LF-CC were published on the Lexus Global website: 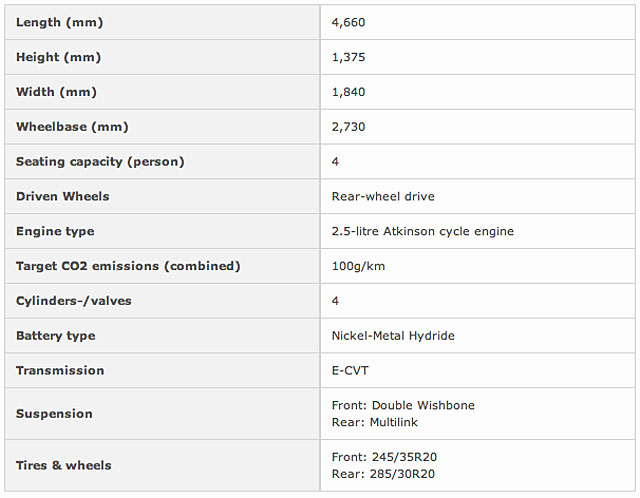 Most of these numbers match closely with the current-generation IS (the LF-CC is 70mm/2.7″ longer, but has an identical wheelbase), except for one difference — the LF-CC width is exactly the same as the current fourth-generation GS. Still, this discrepancy can be explained — the previous GS & current IS shared the same width, so it makes sense that the new IS would mirror the increase of the new GS.

This comparison-by-number backs up the theory that the LF-CC is a precursor to a next-generation IS coupe — however, during today’s introduction of the concept at the Paris Motor Show, Lexus Europe director Paul Van der Burgh used some curious phrasing:

The design direction inspired by LF-CC will be applied to future Lexus vehicles in the D-premium segment and you won’t have to wait very long before seeing the first production vehicle.

Moreover, we can also confirm that Lexus is developing a rear-wheel-drive mid-size coupe, to be launched in the near future.

In the first part of the quote, Van der Burgh stresses that the LF-CC styling will be applied to a D-premium segment vehicle — obviously the IS — but makes no mention that this vehicle will be offered as a coupe. Following this up, he then says that Lexus is developing a RWD mid-size coupe that will be launched “in the near future”, suggesting that there’s also a GS-sized coupe in the pipeline.

Take these two statements together, and the whole question changes — instead of wondering if the LF-CC is the next-generation IS or a GS coupe, what if it was both at the same time?

Don't the IS and GS share a platform? Why make a IS Coupe and NOT a GS Coupe? BD

Making BOTH would not be cost effective....
What are you talking about?  You share the platform & engine, you split the costs. That's all makers want to do.  Make the most cars from the fewest platforms/engines. I expect the LF-LC to join the IS/GS platform too.   The more cars you can use on a platform, the more cost effective the production will be. Look at the new Cadillac XTS.  It is a stretch CTS.  Same platform, same engine.  Companies do it with sedans all the time.  Camry and Avalon. BD
He is talking about the fact that it isnt cost-effective to make the huge investments needed to put more models into production, especially two coupe-models that doesnt have a market or has a very limited market. Lexus should re-introduce the SportCross and the sales in Europe would at least double. The investements needed to make that happen would be worth it. They could offer a coupe for the same costs in investment, but it wouldnt make a bleep on the sales. What's the most sensible thing to do, you think?
So it's not cost-effective to build a coupe? So what are Audi and BMW doing? Why did Lexus make the LFA? You make coupes to stay relevant. To recapture your spirit. To capture the eye of younger buyers. If you just make sedans all day. You get a bunch of old buyers in your showroom. You get bad press. And an aged customer base. Coupes aren't supposed to justify themselves in dollars and sense, per se. They show that you care about your image. They are a labor of love. A strength of spirit. Eye of the tiger..... BD
You're feeling pretty combative about this -- the way I look at it, I'd rather have one fantastic coupe than none at all.
Not getting the combative stuff. Lexus will make two coupes on these two cars at some point.  And that's a good idea.  Long overdue.   That's all. BD
Ok, that makes sense to me. :-)
That's another thing -- the economics of developing two coupes will limit resources to other areas, and I'd much rather see a SportCross or a baby-RX than two coupes that are only a couple inches different in size.
True!
Mercedes seems to be doing well with the E-coupe and C-coupe, BOTH based on the C-class chassis and both just a few inches different in size.....

Maybe it will be called a Lexus CS this time around.. We have IS, GS and CS would fit right in... Or just go back to calling in the established SC... ;) Only the Future will reveal where this Concept Coupe is heading.. ~ Joe Z

There's been talk from Lexus officials that a coupe version of the IS may use a different name.

There wont be a "GS-coupe"!
LF-CC = IS coupe/sedan GS coupe = future SC
IS for sure
This will definitely be in the IS segment, chief engineer of the GS indicated that it would not have a 4 cyclinder engine in the GS range.

That's the thing -- even if it's true that the GS will not get the four-cylinder hybrid (I think it will), my theory is that the LF-CC is a preview of the next-generation IS and a GS coupe, so elements of each future model were merged together.
Yep, that's exactly what I've been thinking.  It's now becoming obvious that these recent LF concepts are radicalized amalgamations of future Lexus products. The LF-Gh and LF-LC practically previewed the wider LS F-sport spindle grille. Actually upon seeing this concept, I was caught off guard by the rectangular headlights, as the IS headlights will stay triangular.The rear and the unique side character lines is what the actual IS sedan will look like, but the headlights strongly show that they belong to the future coupe. The production 2014 IS headlights are evolutionary judging by corporate photos shown of the front end and from spy shots.

There would definitely be another coupe which be will be based on the GS but branded as a standalone model for example LC350 & LC450 h which will take on the likes of BMW 6 series. The SC name i think will be reserved for a toned down LFA
Why must there be a IS coupe and a GS coupe? wouldnt it make sense to have one coupe that falls in between the two? like BMW has the 3, 5 and 7 sedans, but will add a 4 and 6 coupe. and if they make a "supercar" then an 8 coupe. this fits perfectly with what we are seeing here. a LF-CC based coupe about the size of an IS but priced in between the IS and GS. then a SC replacement sized about the GS but priced between the GS and LS. and then the LF-LC based "supercar"... http://www.autoguide.com/auto-news/2012/01/lexus-product-plan-includes-coupes-crossovers-and-a-new-ct.html

Could very well be its own standalone model sharing components with the future IS.  Much like the Audi A5 is to the A4...
Sedans are good for the majority of the buyers, but there is a segment of buyers who would prefer a Coupe. Whether it be for personal reasons (having the best car in your driveway to show off to your pals) or they do not need the function of a family sedan.  I have no doubt in my mind that Lexus will come out with an IS coupe. Look at what they are doing within Toyota. They created the GT86/FR-S to put some emotion and sport back into the company. They also built the LFA for a reason, to test technology and performance so they can trickle it down into the rest of their fleet. Plus if the rumors of the IS sharing a extended GT86 platform are correct, why would they mod that into just a Sedan, and not a Coupe. It wouldn't surprise me though if the coupe was only available as a F-Sport package or just the IS-F. If they already plan on continuing the IS 250C then you could cost effectively use most of the same parts (doors, folding seats, rear interior panels) and just create a hard top that doesn't look fugly.
It might be called a Lexus IC or CC, not IS. I hope they will lower the vertex dividing the upper and the lower part of the grill like in this sketch.  Looks better.  The proportion is not so good in the real concept.  It looks like a Mitsubishi or the very unpopular Tundra.http://cdn.thelexusenthusiast.com/images/gallery/gallery-lexus-lf-cc-official-2/LF-CC_SKETCH_04_2012.jpg
Doesnt 'IS' stand for International Sedan? It wouldnt make much sense to name a car "International-Sedan Coupe", would it? What does GS stand for?

CT = Compact Touring HS = Hybrid (Harmonious) Sport IS = Intelligent Sport ES = Executive Sedan GS = Grand Sport/Sedan LS = Luxury Sport SC = Sport Coupe/Convertible RX = Rally SUV GX = Grand SUV LX = Luxury SUV L = Long h = hybrid LF = Lexus Future (LF-C, LF-S, etc.) -- with the exception of LF-A which means Lexus F-Sport Apex F = Fuji (IIRC) Unofficial
A coupe is also about EMOTION. For years the Lexus brand lacked emotion and only now are they beginning to generate it with their recent interesting and catchy designs. A stylish coupe can capture the emotions of certain buyers and win them over. As analysts will tell you, car-buying in todays world is becoming increasingly more emotionally-driven than logically-driven. Many people are buying cars with their heart, not their brain.

You know what I think sparked this whole change? I don't know if anyone saw the Top Gear episode when they launched the LF-A, I believe, and Richard Hammond kept on bashing Lexus for producing boring cars. However, in response to your post, you're partially right. Those who can afford to choose will buy with their hearts for the rest it's more of a logical decision; their budget. I think, that's where Lexus dominates. Their cars are priced high enough to compete with the German luxury segment but low enough to make it affordable for those that want luxury but still making it affordable after paying all the crazy taxes. If only they can perfect their engines and produce efficient monsters.

Alright guys...you don't know me and I don't know you but I am here to officially tell you that this concept is for the GS coupe and that the new IS which will come in a coupe configuration will look very similar.  I know this because I work for a Lexus dealer in Houston and this is what my GM who just got back from a Lexus event was told by Lexus corporate.

I hope you're right ...  I agree with the above post that it will be called IC. Intelligent Coupe and Grand Coupe
Then why does this concept look like, and sized like, a IS Coupe would be? Why is this nowhere near the GS inside, or outside? BD

I don't know but you can count on this info being accurate. Also expect an all new LS in 2015.