I may have mentioned this before, but last month, I packed up the 2013 Lexus GS 350 AWD with my wife and some luggage and headed out for a week-long road trip through Ottawa and Montreal — the full story can be seen over at Lexus Magazine, but I also wanted to talk about how the GS handled the week of travel.

Even though I’ve been driving the GS since the beginning of the summer, in some ways the character of a car can only be discovered with an extended journey. 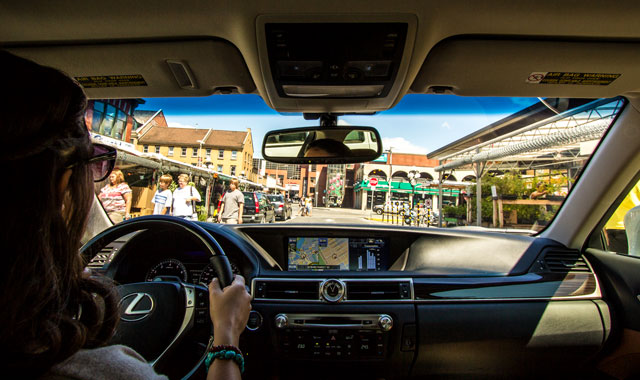 The first thing with any long-distance drive is comfort, and in the seven days behind the wheel, I never once felt sore or stiff — the eighteen-way adjustable seats in the Technology Plus package are infinitely customizable, yet simple enough that it’s possible to find the optimal position easily. My wife also liked the fact that she could sit cross-legged in the passenger seat.

The comfort also extended to the technology — maintaining focus over long stretches of highway driving can be tiring, and the dynamic adaptive cruise control allowed me to relax knowing that the GS was always paying attention: 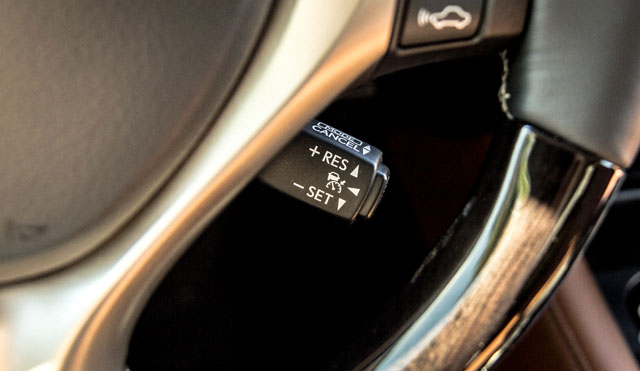 (The actual dynamic cruise control system appears to be much improved over previous models, with a more gradual throttle application and lighter braking — I relied heavily on it during the trip.)

Driving in unfamiliar territory also meant some quality time with the GS navigation software and its compu-female voice, which my wife and I affectionately referred to as Janet. With no Enform remote-assistance service available in Canada, I used the voice controls to program locations on-the-fly, and I was satisfied with the experience — I also appreciated the split-map mode with its micro & macro views: 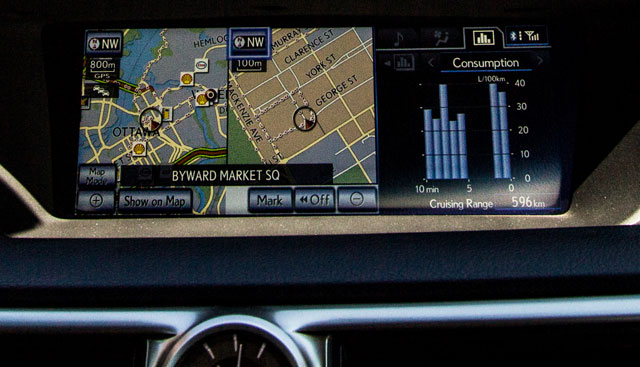 As someone with well-tuned sense of direction and a tendency to improvise, the constant route recalculations did grate on my nerves — that is, until we turned Janet’s voice to a little whisper and accepted her quiet advice.

Covering so much distance, the GS Drive Mode Select spent much of its time in ECO mode, with gas mileage on the highway averaging 9.0L/100km (26.1 mpg): 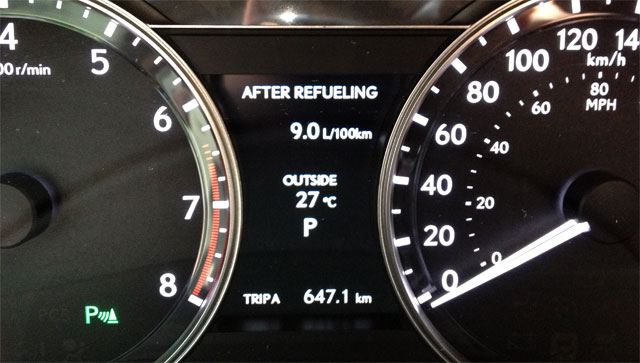 As to be expected, city driving pushed the overall numbers up — the GS ended the trip at 9.6L/100km (24.5 mpg), more or less on target with its official U.S. numbers.

There was only one real opportunity to let the GS stretch its legs during the trip — once we started through the Laurentian mountains and the up and downs and lefts and rights of Route 323, I turned the Drive Mode Select to SPORT+ and opened up the throttle: 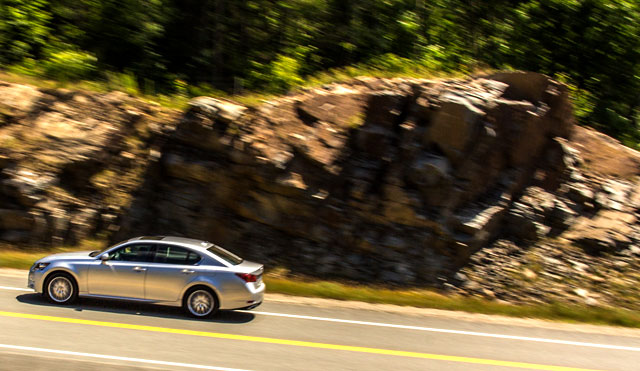 Surrounded by nothing but rock and trees, the curves of the road and the sound of the engine combined into a series of perfect moments, the afternoon over in the blink of an eye — one day later and we were in the thick of Montreal traffic, prepared for four days of busy streets and aggressive drivers (and cyclists, and pedestrians).

Again, the GS dealt with the situation gracefully — the cabin shielded us from the hustle and bustle, and with a little patience, cruising around the city was almost as enjoyable as the mountain roads the day previous. 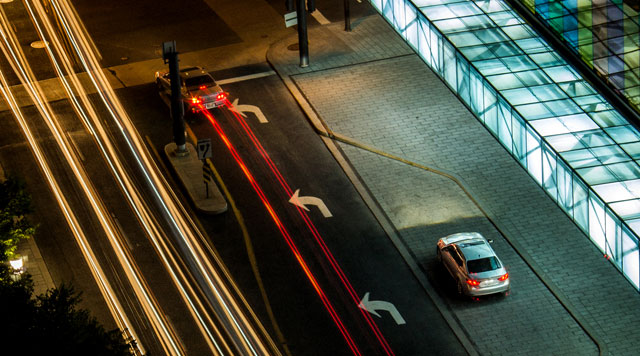 It wasn’t until the drive home that I pieced together the bigger picture — Lexus has focused almost exclusively on the new styling and improved performance of the fourth-generation GS, but behind the spindle grille is a sedan of great versatility. There are few vehicles that can do so much so well, and it’s this well-rounded nature that I enjoyed so much on the road– no matter the circumstance, the GS always felt like the right vehicle at the right moment.

(The GS 350 goes back to Lexus Canada at the end of this month, but I still have a couple stories to go along with my wrap-up final review — stay tuned!)

Would it possible that RWD & a good driving condition plus different driving style made even better MPG ?
Some really nice photos! Enjoyed them thoroughly.
The GS is growing on me.. I really like it more now that i've seen it in person..
also crew, tell us more about how your wife feels about the car. it interesting to also hear the side of the woman

Funny you should mention that -- one of my final features will be in an interview with my wife.

I wonder can anyone show how the latest GS's indicator/wiper stalk work ? I heard of if but I never saw it , yet .

Sure, I'll film a little video for you. :-) It will likely take a couple days.
Filmed the video, but forgot to post a link: http://lexusenthusiast.com/reviews/2013-lexus-gs-350-awd/demonstrating-the-new-lexus-turn-signal/