As previously mentioned, Google has added a number of Lexus RX 450hs to their self-driving car fleet — recently, the company published an update on their official blog:

Our vehicles, of which about a dozen are on the road at any given time, have now completed more than 300,000 miles of testing. They’ve covered a wide range of traffic conditions, and there hasn’t been a single accident under computer control.

We’re encouraged by this progress, but there’s still a long road ahead. To provide the best experience we can, we’ll need to master snow-covered roadways, interpret temporary construction signals and handle other tricky situations that many drivers encounter. As a next step, members of the self-driving car team will soon start using the cars solo (rather than in pairs), for things like commuting to work.

What Google is doing with its self-driving fleet is nothing short of amazing, but a very simplified form of autonomous driving is already available in existing vehicles — an example is the 2013 LS, which could likely drive itself by using the Lane Keep Assist and all-speed cruise control, though I DO NOT recommend anyone testing my theory.

(In a funny coincidence, what should I spot on the road while in the Bay area test-driving the new LS?) 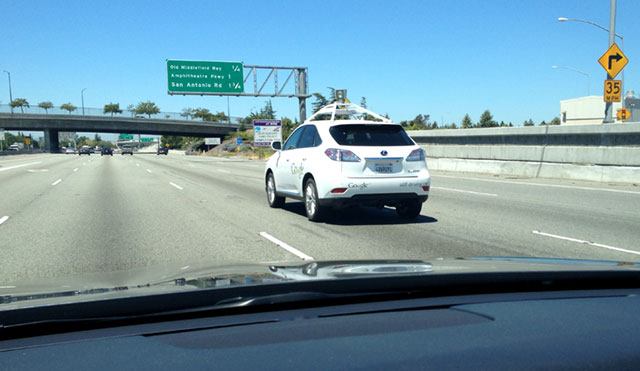 Nice to see they use Lexus too ... :P
Nothing short of Amazing! Thanks for posting.
Krew, when are we going to hear more about your driving experience with the 2013 LS? Not the technical preview but your personal impressions. Can't wait to see what you have to say about it.

My review is 80% done -- however, I have a few hundred photos of the new LS that I have to go through. Still going to need a few days, but don't worry, I haven't forgotten about it! :-)

actually when the LS460 came out in 2007, fifth gear tested it and the presenter did engage LKA and the DRCC. Problem is that the systems shut off when it doesnt sense human interaction on the steering wheel
If it wasn't for the driver monitor on the LS, I would be tempted to engage LKA and Radar cruise, then jump into the back seat for a movie and a massage. That would make my 1.5 hr commute more relaxing.
Driving the NX 450h+