The Age in Australia is reporting that Toyota Motorsport GmbH, or TMG, could become an official performance sub-brand for both Toyota & Lexus:

Toyota will launch a new performance division from the ashes of its defunct formula one team. Toyota Motorsport GmBH (TMG) president Yoshiaki Kinoshita confirmed that his company has begun work on high-performance road cars which will carry the TMG badge.

“I cannot show you today but we have such kind of car, not an AMG; change the A to T,” Kinoshita said.

The very first confirmed project is the super-LS we saw last year: 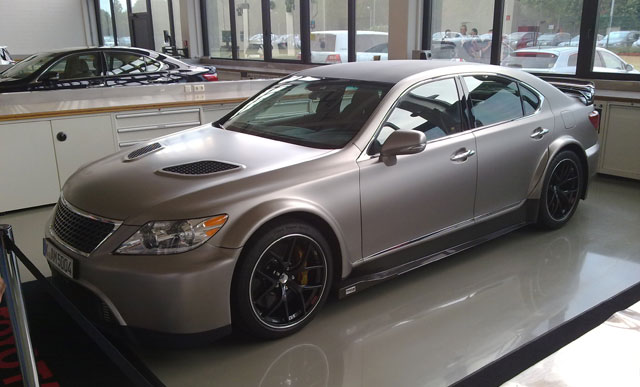 The LS is powered a 485kW [640bhp] twin-turbo V8 petrol engine coupled to a dual-clutch transmission. It also features re-styled bodywork – including a large rear wing – and the suspension has also been overhauled.

It has already been tested at the Nurburgring in Germany and Japan; it is likely to debut at the Essen motor show [in Germany] in September.

A 650 hp LS definitely makes a powerful impression, but after Lexus worked so hard to establish F SPORT, I would be surprised to see another performance sub-brand — this point is somewhat acknowledged in the article:

Although the final decision has yet to be made on going ahead with the TMG brand, Kinoshita is confident. [TMG technical director Pascal] Vasselon said a decision could come before the end of the year.

“It’s something to be finalised in the next six to nine months,” Vasselon said.

“Which badge has on the car is one of the decision that needs to be made in the next few months.”

The last quote is key — while introducing a new badge to the Lexus lineup might bring unnecessary confusion, using the TMG team to improve the F SPORT range makes a whole lot of sense. Interested to see where this goes.

Why shouldn't they? Mercedes has Brabus BMW has Alpina Lexus now has TMG

Mercedes tem AMG... BMW tem M/// e Audi tem ABT congrats
Sorry in English Mercedes has AMG, BMW has Mpower and Audi has ABT
Isn't Audi should be S-Line , RS-Sport that sort of stuff ? But anyway , it's correct that Merc should be AMG while BMW is M GmbH .
You didn't get it. IS-F = C63 AMG = M3 IS-TMG = B63 S = Alpina B3S
Thanks for that Clarity Mohammed now its making sense!!
But ... Brabus & Alpina is tuners company from others , while TMG ... isn't that TMG is under Toyota ?
That's true. The advantage of being a Toyota company means that they will be more prepared to release fully tested TMG models while still under full warranty from Lexus. It allows a 2-way discussion and feedback on current models and future ones rather than wait until the new model is released and then attempt to work with what you have.
This is a seriously great point. Didn't even see this angle.
I don't like it.  AMG/M are much stronger brands, having existed for decades and spanned multiple product lines.  Brand-wise, AMG/M can support a second name.  However, I don't think "F" has the needed brand presence to allow for a second tuner; adding a second brand would only confuse customers. Lexus needs to build up the value of a sole brand, and I don't think switching names after 5 years is the smartest move. Just my 2p.

CarAdvice actually visited the TMG facilty in Cologne & there is a curious picture of an LFA.From the A-pillar back,this LFA appears to be matte black & the rest appears to be raw CF.It features a NACA duct & other hood venting,A honkin front spoiler,a front fascia that looks like the rumored LFA II on each side,a massive fixed rear wing,upgraded single bolt wheels & tires & other extensive upgrades.It looks very menacing,but I know nothing about the official specs or what it's intended for.It's not from GR as far as I know.

That's the LFA GTE race car, which was built to race in Le Mans -- though it obviously didn't participate this year. Photos surfaced last year, but were quickly removed: http://jonsibal.com/blog/2011/07/lexus-lfa-gte-first-pics/
Thank's for clearing that up for me.It had me really intrigued!
Lucky enough , I saved two picture from somewhere else .

A fair point is made when talking about continuing the F Sport line vs. discontinuing and moving on to TMG, however, as the the Lexus Fuji Apex (LFA) comes to a halt after its 500 units are sold; it's done. That said, should the F line be done? And with the new spindle look of Lexus, why not start a new performance line as well to compliment it. Many good questions to be asked here, but personally I would like to see an LFA 2. If we see an LFA 2, F would be more exclusive. Perhaps the F line could be more exclusive and exotic and the TMG line be more realistic and attainable like normal F Sport?
BRING IT!!!!  F then F-SPORT now TMG WHOOOOOOOOOOOOOOOOOOOOOOOO
I don't see a problem, really. The RX F-Sport and GS F-Sport are just body/handling packages.  They don't add power. You can have an F-Sport TMG, with turbo power.  Done. BD

Agreed
If Lexus is going to take the effort to add extra power using their TMG line. They could just rather invest the money and produce a RX F and a GS F to meet customer demands. Even though your idea makes sense, I think consumers would easily get confused. I think the TMG line should compete with the Brabus and Apline lines like mentioned by others, but must have different body styling so people can tell the difference between a F line and a TMG line.

I was confused at first because I thought "Doesn't Toyota already have TRD to focus on performance for Toyota, Lexus, and Scion cars?" After doing a bit of research, I realized that TMG is probably a replacement for Toyota's defunct European performance division, TTE. Thaaaat makes a lot more sense haha.
From where I sit, the main problem with TMG bading is the T. I thought Lexus wanted to differentiate itself further from Toyota, so I cannot imagine them using a T as in Toyota on their products. My wild guess here is that Lexus will get technical support from TMG, but the cars will be badged Lexus F. The TMG badge can then be used on Toyota-branded products.

That's what I was thinking.How about F & F-Sport for Lexus,TMG for Toyota & TRD for Scion?

Idk, honestly I prefer the F-sport accessories similar to M sport, then real F cars compared to bmw M cars. TMG is too similar in wording to AMG for my tastes; and they've established themselves well with the IS-F in my opinion, the next one will be an even greater beast. Plus Lexus wants to differentiate themselves from Toyota, so why include Toyota in TMG? Hopefully TMG just works development to be branded as F/F-sport like others have stated.
Very true !  In fact if they don't opt for TMG name for the Lexus line, and rather just use the F badge (or maybe come up with a new name for this additional line); they must not do their development for the new line under the TMG brand. They should set up a R&D in Germany or elsewhere under whatever new name they come up with. This will further distance themselves from the Toyota badge. They did do this for their design centre, so I don't it is a very far fetched idea.  ES was and is still ridiculed just because it shares the chassis with a Toyota. So you can imagine all the Lexus haters going that Lexus TMG is just a Lexus with Toyota performance (even if the performance is truly amazing).
Had to laugh though @ a comment that I seen on C & D in response to the 'haters' comments..."At least they didn't copy the German brands when it comes to reliability."
Err ... Lexus LX , GX , RX , GS & IS is actually still Toyota chassis , it might not directly shared with any Toyota nowadays but they're related , if haters really wanna hate , they would hate Lexus in any reason , not just TMG .
Toyota Motorsport GmbH or Toyota Team Europa , already quite confuse when it's using on Toyota , because more people would know Toyota Racing Development instead ... and now Lexus , have their own F-division , which made it even ... weird . But one thing ... do you guys know TOM'S ? That company made tuning parts for both Toyota & Lexus , not sure how's them recently but few years ago they still made tuning parts for Lexus IS & Lexus GS .

Personally don't think the brand(s) is ready for another sub, they are finally getting somewhere with the F marque, the latest tweaked IS-F is right up there with the M3 and people are looking forward to a new version along with hopefully a GS-F and maybe others. Give it a few more years and cars to get the F more established and maybe then? Having said that would love to see some turbo models :)
My bet: Lexus will be F and Toyota will be TMG. The first car to wear TMG badging will be the new Auris which is due out end of this year.
I thought there was a G power brand from gazoo
wow such a confusing topic i wonder how will the bigwigs at Lexus/Toyota deal with it but so many ideas shared here make sense my aproach would F-Sport for a non standard and F /TMG example IS-F /IS-F TMG and or CT250 F TMG edition
Driving the NX 450h+