More details on the mystery Lexus LS emerged today, as a leaked spec sheet reveals plenty about what’s under the hood: 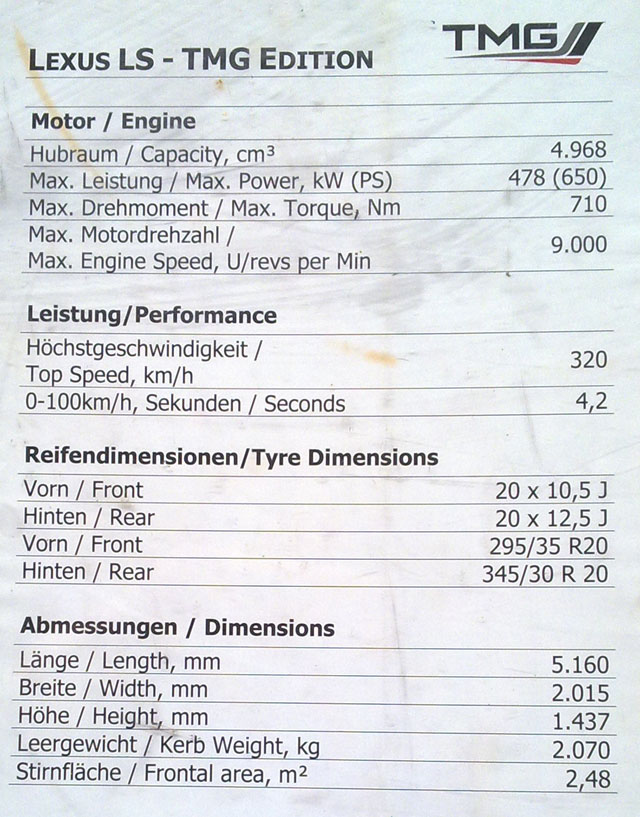 Called the LS TMG Edition, this hyper-LS was built by Toyota Motorsport GmbH (TMG) using what looks like the 2UR engine used in either the IS-F or the LS 600hL.

Even with the specs revealed, it’s still all speculation as to why this LS was created in the first place, but the fact it was built by TMG (not to mention the super-high RPM & HP) would suggest the LS TMG Edition is meant as an experiment and not a potential production prototype.

345 tires..that's phat..no literally!! 0-60 4.2 wow, and damn I'd probably wouldn't feel so badass if I was rolling in S65/S8 and this thing pulled up next to me. This thing just looks downright scary(besides the front bumper hate/love type)
Is there any other reason why they would be "experimenting" with this car other than to make an LS F? Why waste the time and money developing this 'experiment' if they have no intentions of making F-varant of the LS, even if it doesn't happen until the next generation.
This is an engine test, ON "THE RING", for the LS-F.  You have to be bling not to see that! They just haven't decided what engine is right. BD

I  agree.....this is a fantastic choice of power here. To compete with the Germans it is something that will make LEXUS a power to be worried about......AKIO FORWARD DOING !!!!!!!!!!!!

Toyota Motorsport GmbH (formerly TTE) really knows their stuff. I'd love to get the turbo kit for my MR2 Roadster. Horsepower up 31% and torque up 50%.
its so awesome.

could you be more perice to the people?

Mr Toyoda said he wants performance! MAKE IT SO! BD
TMG = Too Much Game!
Driving the NX 450h+