A mystery Lexus LS has been spotted on the Nürburgring sporting some rather extreme performance modifications — let’s start with some photos from Carscoop (click for larger versions): 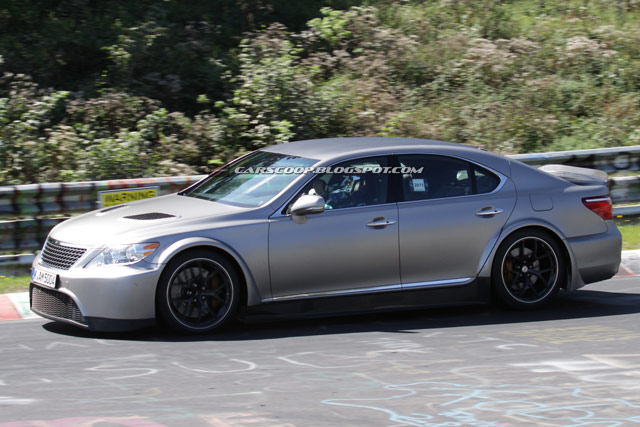 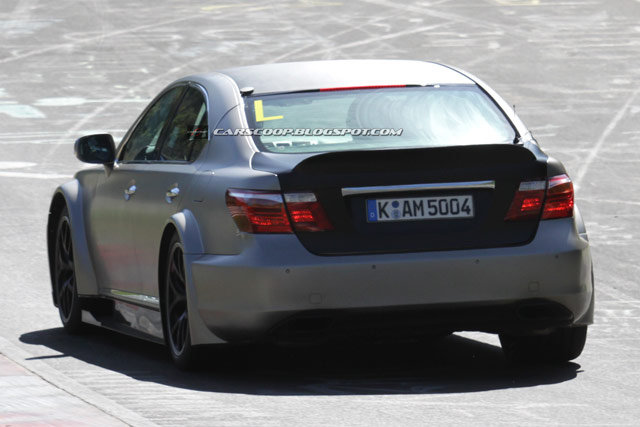 An immediate first reaction would be that we’re looking at an early prototype of a next-generation LS-F, but with the relative polish (and aggressiveness) of the aero parts, plus the fact that no attempt was made to disguise the car at all, I’m more inclined to think this is a finished project car — though one that might have indeed been built as a LS-F proof-of-concept.

No matter — given the massive front lower grille and the hood vents, it’s safe to say whatever this LS may be, it’s packing some serious horsepower, and that’s exciting all on its own. More details as they become available.

Update: An anonymous commenter shared this observation about the license plate:

Seems interesting... a Lexus LS overcharged made by F Motorsport or maybe another manufacturer like Brabus, Irmscher or other. Look like also a DTM car.

I think this could be awesome with the same V10 engine taken from the LFA and pumped with an hybrid powertrain so we can get about 650hp and we can destroy the crappy S8, audi, crappy premium ever.

It actually has a supercharged V8 from the IS-F. Pictures and spec sheet were released on the internet a few months ago.
Does it ? I wanna see !
Do you by any chance still have the link?
No links that I know of.
YEAH OK MAX, YOU CANNOT AFFORD AN S8 AND LIKE MOST TOYOTA OWNERS AHEM SORRY I MEANT LEXUS YOU ARE A   H.A.T.E.R.  THIS LEXUS IS JUST THE "POOR MANS" S8 or S63  ZING! fredsavesourmoney@yahoo.com

This is a mule, it has the body of the current LS but extended parts to fit the platform that is underneath: the next generation LS. Based on these shots the next LS will probably be quite a bit wider than the current model. The lower air dam on this mule is probably there to simulate the amount of airflow the car would get from the lower half of the spindle shaped grill that will likely be on the next LS. I'd guess that spyshots of the actual model covered up are probably 6 months or so away. The 4GS mules started rolling around (in 3GS clothing) in October 2010 and spyshots were spotted this summer and the car unveiled last month.

Sounds like the most plausible explanation to me.
I HIGHLY doubt this is a text mule for the next gen LS...

Maybe a LS-F test mule perhaps?
That is by far the meanest LS I've ever seen. It has to be a LS-F mule.
Looks very interesting. I can't wait to find out what this is, although I'm hoping its a mule for a future LS F. Also, wouldn't this LS have to have a big engine (V10 or V12) or something for it too need those huge vents on the hood?  In some of the pictures the roof and trunk lid looks black but in some pictures the roof looks silver and matches the rest of the car. Is it just me or does it look like there's more than one mystery LS?

I noticed the color change as well. The trunk lid is also previous pre-refresh deck....as Adobe_lexus_202 mentioned. Well whatever it great to see that they are definitely working on something specila for us.

Just got to thinking, this doesn't look like a typical mule. Most the time mules don't look this production ready. I mean they typically have extra panels covering up parts of the car and lots of tape. This car has neither. Not saying this could be a production car, but it looks more like a tuner car than a mule IMO.

Whatever the reason that this LS is visible is exciting news.....if the LS-F is coming soon that is the most exciting news yet. I am so anxious for a high perfomrance LS I can't stand myself....as we all know when LEXUS is up to something good they throw sneak peaks that get us all motivated.....the LS is one of the most important models in the line up (to me) for sure. Come on Akio let's keep up that momentum you have and the drive we all like to see from you !  This looks like you are keeping up the growth you have mentioned with the whole line-up.
I managed to save pics of engine specs before they got taken down a few months ago... Let's just say this car has more HP than any Lexus right now, even the LFA. ;)

What are the engine specs? can you show us the pic?
Engine is 5L V8 ... 650HP ... 710tq ... 9000RPM redline ... 4.2 0-100km/h. Ill send pics to Krew
SWEET!!!
Any speculation on how much this might cost?
thanks for those info imagine that Engine in the GS-F vs the Germans WOW
I have the images as well, but unfortunately, I can't post them due to a request by Lexus Europe.
This is correct. We got a message very shortly after the pics were up to take the pics down since they were taken in the Cologne facility without their permission it seems. That is where the LFA GT2 racer was also spotted.
What exactly is the LFA GT2 racer? How is it different than a normal LFA? can you give me any info about it?
It have a smaller wheels , brakes doesn't looks like Carbon-Ceramic but Metal one , a more wider bodykit (I think it's wider than VLN one) , spoiler also quite wide , side mirror is replace & hood have more vent ... I've the picture collected but no further information . There's a LS park besides it & I guess it's the same Lexus LS as the spied one . As for Krew ... if this message is against Lexus Europe , you can edit or delete it .
Autoguide actually posted the LFA GT2 racer: http://www.autoguide.com/auto-news/2011/07/lexus-lfa-gte-race-car-spied.html
Some other site posted it as well , but Lexus Europe asked to taken it down .
9000rpm is slightly impossible unless the engine is hugely rework ... but since you said it have 650hp , I'm sure it's highly rework . Judge on the torque , it seems like forced induction but I don't know if it's Super Charged or Turbo Charged .

you would think after spending all that money they could at least get the trunk painted :p   eh i'm not a fan of the front grill
I wonder what this baby sounded like.
A car like this would take power to the next level
I think this car is a performance LS instead of next LS's mule ... why ? Because : 1. It have LFA's rim although with 2-tone scheme 2. It have almost same as LFA's brake system 3. It doesn't seems to have rear seat but other panel remain 4. It have a roof that looks like Dry CF replacement 5. It have spoiler build on the trunk lid ... although I know next LS is coming soon .
looks like some tuner job!
Great looking car I think, maybe the LS-F will be the final LS for this bodystyle
I think this is related to the Lexus LC concept http://lexusenthusiast.com/2010/10/11/lexus-lc-600h-to-replace-sc/

I hope so. Thing is, the 5.0L V8 650 hp engine in the next gen SC would be amazing, just not sure how the LFA owners will feel about that. I wonder if someone who owns an LFA would be crazy enough to switch out the engines.
I don't think it would use a 650hp 5.0L Maybe the same engine - but improved - of the LS600h or a supercharged version of the 3.0L V6

I believe this is a project by Toyota motorsport in Germany, because I saw a photo of the GT spec LFA and you could see the back of this LS in the background.

Yup... I saw the same pics! I believe those photos were taken inside of their F1 facility.

Did I see huge intercoolers??
pretty sure it is for testing the 4.8 V10 after they tuned it to be in a sedan car and of course if they did it on the ring with the new GS all people will know what is it for

ah didnt think about that.
It isn't .

Does anybody think thatif they used the V10 from LFA,  it would seriously de value the LFA, and take away some exclusivity. I know car companies don't normally care about this, but I think it would depreciate all LFAs.
I love how they mixed the pre- and post- facelift taillights and used the pre-facelift chrome bar above the rear license plates.
My goodness, what have they done to an otherwise beautiful car..
Lexus LS TMG Edition If you look close enough,you can spot the TMG badging

In carscoop site that is..
Does it ?
Shhh ... don't said it so loud first .
:P
I doesn't spotted the TMG badge but I do know what car it is .
Correction: I found it in the club lexus photo

I have been an Lexus' model user for all my life and they never failed me. Loved the design, this is a great car!
M5 or this new monster. I'm tempted by both. If only my funds would allow...
Driving the NX 450h+