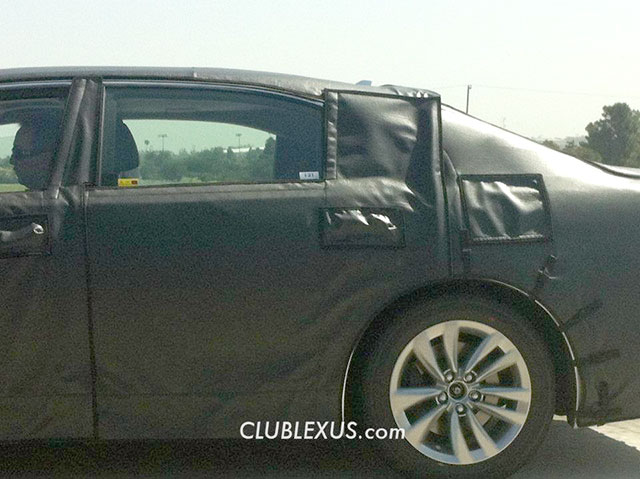 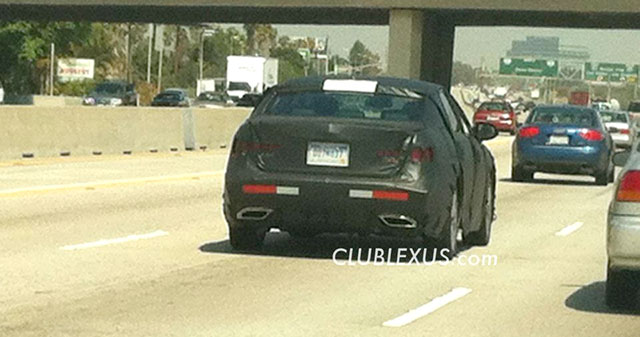 There’s obviously some styrofoam under the camouflage that’s deforming the c-pillar, but the overall profile appears to be the same as the current-generation — let’s zoom in on the last photo for a better look at the rear: 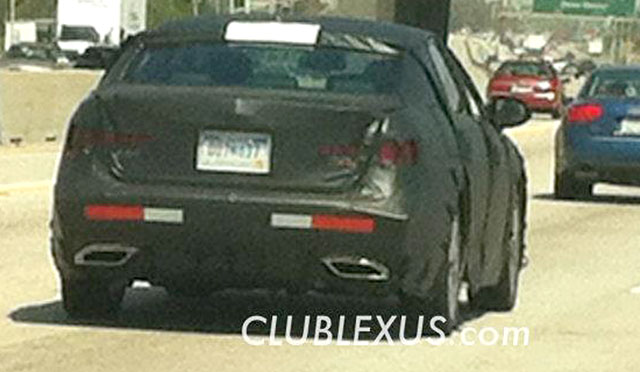 The tailpipes also bring the current LS to mind — though with the addition of the diffuser, the entire rear design appears to be very similar to from the new GS.

All in all, not much to look at — these photos do suggest that the upcoming LS is an evolution of the existing model, but with all that camouflage, who can tell?

I am with you on this thought.....this is to me the most important model to compete with the German Luxo sedans.....really it is what LEXUS is best known for sending shock waves through out the world when introduced.  It is vital especially now to compete with a vengeance to prove the BEST. I am really hoping that there is an extended wheelbase over and above the "L" version. Lexus is out for blood now and I know they will not dissapoint.
I did some reading today, the very first Lexus models did indeed send shock waves - perhaps the first brand to have taken on the Germans in their own arena. I am truly hopeful for the new LS.. on an unrelated topic, will the new GS be getting an 8-speed auto?

The current car is the best looking in the class, and it's not even close. They won't mess with success...... BD

Yeah the current LS has one of the most sophisticated automotive design, it's so subtle & elegant.. 7-yrs old and still looks better then what there is..
I'd say that the current LS really isn't 7 years old as it wasn't designed nor on sale in 2005. By 2004 a full scale clay model of it already existed at Lexus HQ, making it almost 9 years old. I think the first 100% real photos of it surfaced in August 2005 via AutoExpress UK, only for it to previewed by the LF-Sh that October. The new LS(XF50) is already 2 years old and isn't even released yet.

The wheels is too small for F-Sport , it's even smaller to be LS460 .
it's lexus there trying to keep us guessing by throwing clues at us.
looks like 17-inch ones.

I've saw next generation Merc S-Class's picture already , it looks like just a C-Class being photocopy with scale of 135% ... not much special about it (maybe C-Class not special for me) ; hopefully Lexus do a better photocopy (I think they would do because CT200h to GS350 is a good copy) .

You mean without camo?
Without camo but with sticker cover , but main shape can be seen because the sticker is too tight .
The C-Class is supposed to be a miniature version of the W221 S-Class, but almost certainly not the W222. I'd say that it's is a result of partially evolutionary design attributes showing up on future models. The next C-Class is evolutionary, so that may explain why the W222 S-Class would resemble it its predecessor.

When will this model arrives?
The distinct glasshouse has gone.
I've always liked Lexus because their cars had enough differentiation in design. Now It appears theyre going for a very distinct family look. (Grille, Mirror, Headlamps etc.) I don't necessarily disagree with the decision, seeing that BMW and Audi have much success doing just that, but if that be the case, Lexus has it coming for them considering the new driving dynamics and interior quality of the new GS. Lexus Future looks bright!
I hope this has something to do with the new LS.
I love the high rear end looks imposing.  Boy I cant wait the LS is the car that made Lexus ! Dont mess up make it beyond expectations
The previous model did send shock waves as well and remember it became world car of the year. This car is probably giving MERC and BMW sleepless nights as we type. Lexus is the only brand they fear the most.
Here's some more. I won't post the rest, as I'll let krew do that.

Here's some more. I won't post the rest, as I'll let krew do that.