Lexus Magazine is running an interview with two of the Calty designers responsible for the Lexus LF-LC, senior exterior creative designer Edward Lee & senior interior designer Ben Chang, and there was one part that really stood out for me:

If a Lexus owner—somebody who knows Lexus vehicles well—were to sit down in the concept car driver’s seat for the first time, which interior design elements do you think he or she would be most struck by?

Ben: Well, with the interior, we wanted to do everything with a modern approach, but in an even more artistic way. So when a Lexus driver sits down in the car, they’re going to notice how artful the cabin feels. It’s got a hand-made look, like a master craftsman put it together—but it’s all, of course, supported by the latest technology.

There’s lots of beautiful materials, too—the leather, the suede, the brushed metal trim. We used those materials not in a traditional arrangement; instead we created something futuristic, fresh, and modern.

With so many contrasting materials and technologies used in the interior, it could have been an awkward mishmash, and yet the result is both elaborate and well-integrated — there are certainly some overdone elements (specifically, the instrument panel), but the interior really is exactly as Ben describes it, “futuristic, fresh, and modern”.

Also included in the article is this previously unseen photo of still-under-development LF-LC in silver: 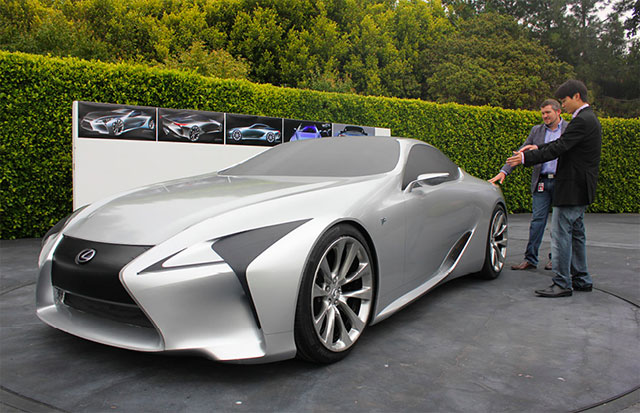 I suppose that the black “shield” used in the top-half of the front grille makes the LF-LC look too similar to the LFA, but I’m loving that silver exterior.

That silver concept looks 2 Sweet! The grille with a bumper looks more production-ready BD
I think this car would look good in any color but especially in Starlight Black, my favorite.
great job! believe me, that is a good post
I dont get why some think this looks similar to the LF-a. It doesnt.
Naaa, in red looks 100 times better
Driving the NX 450h+