Just hours after my prediction of a refreshed LX in 2012, Autoblog has received official confirmation that Lexus will debut an updated version of the giant SUV at the Detroit Auto Show:

Bill Kwong, Lexus Communications Specialist, tells Autoblog that the changes to the LX will mostly be cosmetic, consisting of slightly updated sheetmetal as well as changes to both the front and rear fascias.

The exterior cosmetic changes are certain to involve the new Spindle Grille face of Lexus, which may end up resembling the LX Sports Luxury package already available in Australia: 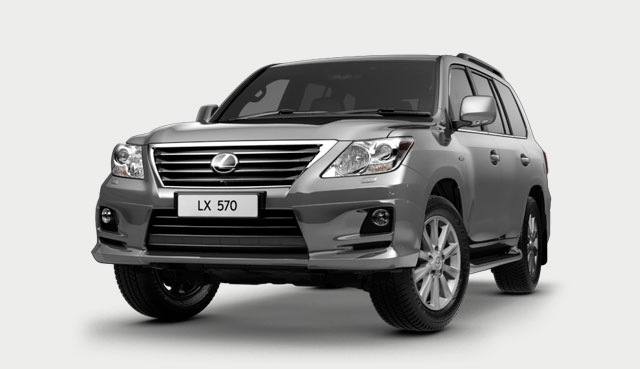 This updated LX, combined with the new concept teased earlier this week, should make for an exciting start to the year — looking forward to January 9th when the Detroit Auto Show opens for its press days.

The RX refresh will follow shortly after the LX.
Spindle grille...... BD
NICE NICE NICE! I hope this is thorough! The 2gen updates were pretty nice, but omg... this car needs something! And that is like the only good pic I've seen of the LX with the "F Sport" cladding.
This is my favorite large SUV, can't believe it didn't sell well in N/A compared to GL's. The last gen was pretty ugly, gotta admit lol. But this one is nice! especially if you put some bigger wheels because it looks hideous for big trucks to have small wheels. But the tech in this car and interior is amazing,never drove one but checked it out at the dealer and its nice! and I've heard it has some really good off-road capability also. Hope it does well in the next gen though.

That's an apples to oranges comparison Benz GL is unibody and sells for $62k The LX is a truck and starts at $80k There isn't a huge market for $80k trucks BD
should leave the trucks for toyota lexus should be far more hwy biased nobody is gonna take a LX offroad anyway so it should have a total redesign ditch the truck chassis
the 470 was so much better looking then the 570 the front end quad lights on the 470 so much better and classier then the undersized out of proporsion head lights on the 570..... do agree on the tech the 570 is great but at the end of the day the vast majority of people wont even think about taking a 80 grand lexus offroad anyway all this tech should go into the landcruiser and take the lexus on another route make it much more sporty and turn it into a hwy criuser
LOL!! sorry but they are selling like hot cakes can't keep them in stock. I should know I sell Lexus, GL just built in larger number but LX is based on Landcruiser and Landcruiser are selling very well worldwide.

I really believe Lexus should introduce a diesel engine to the LX series. In Australia (amoung other countries) the Landcruiser is powered by a Twin Turbo 4.5 DI Diesel which is tuned for 195kw / 650nm. In markets such as Australia and Europe - i believe a diesel variant would be a more attractive proposition then a petrol derivative. LX450d .. sounds good to me !!
Expected to see facelift LX because already saw the picture of facelift LC200 .

This is one of the best and most important vehicles next to the LS flagship. I would love to see it go more upscale with a longer wheelbase and length.....I know from feedback from others that they passed on the LX because of size and length.....I think a longer version option would be great and keep current for people like me that admire that size vehicle. Hopefully the refresh and next generation  will include side turn signal markers and an upgrade to more bespoke leather options, stitching,etc.------LEXUS needs to give Land Rover--Range Rover a run for their money.

There is not going to be a longer version of the LX unless there is a longer version of the Landcruiser. And that is not gonna happen. There never was a stretch-LC and there never will be one as this would seriously hamper the LCs offroad capabilities. Although i don't know why there is no LX 450d using the 1VD-FTV Diesel Engine. By the way that same engine would also fit wonderfully into the LS sedan.
your remarks reflect comments of a long wheelbase only-----that is not what I was suggesting-----a long wheelbase version---NOT to discontinue the current---I am sure the current wheelbase will not be taken away....I am fully aware of it's off road capabilities since I drive one.

http://www.roadandtrack.com/auto-shows/detroit/caught-testing-2012-lexus-lx-570 LX facelift spied! :D
Amazing! Thanks for this post
Here are some spy shots of the update LX in camo!! John E.
http://www.roadandtrack.com/auto-shows/detroit/caught-testing-2012-lexus-lx-570
Driving the NX 450h+