After staring at the official photos of the 2013 Lexus GS for a week now, I thought it would be an interesting exercise to compare the production model with the LF-Gh concept (click any photo for a larger version):

Since the LF-Gh was meant to be a hybrid concept, the three LED headlights are much more distinct than the GS 350’s single projector assembly — but beyond that, it still astounds me that so much of the concept can be seen in the production model. 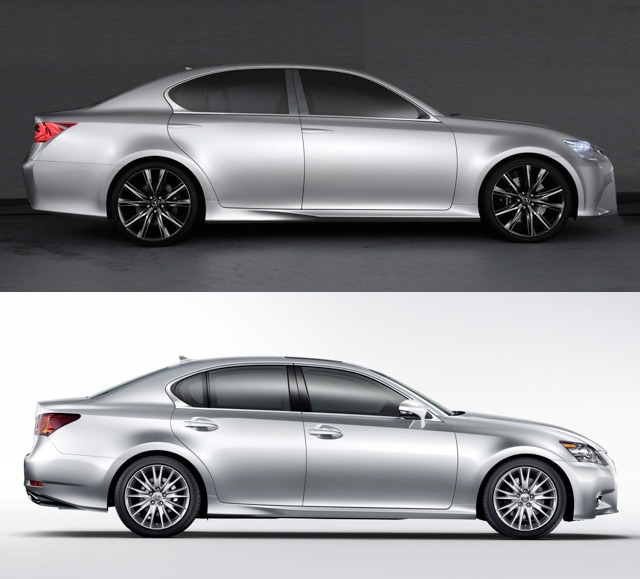 Again, the side profile is virtually identical from concept to production, though the massive wheels & wheel wells on the concept are much more visually impressive. On the other hand, I like both the front & rear profiles much more on the production model, especially the faint glimmer of the exhaust in the rear bumper.

With the exception of the defining “A” sheetmetal crease, I was never a fan of the LF-Gh’s rear, and much prefer the production model’s design. The diffuser rocks my world, the taillights are much more defined, and I even like the thin chrome trim on the trunk line.

All in all, for as much as I like looking at concept vehicles, I always end up preferring the production model — especially when it comes to Lexus. The fourth-generation GS has extra layers of polish and practicality compared to the LF-Gh — it’s made for real life rather than display.

How do you think the fourth-gen Lexus GS compares to the LF-Gh concept?

The difference of LF-Gh & GS is quite small ... might because LF-Gh is made after GS is being design , because the LF-Ch & LF-Xh is a huge difference from Concept to Production , while the LF-Gh is little . Of course the most production-ish concept is belongs to LF-Sh .

Thanks for the comparison just what i wanted to see! Really hoping the GS-F looks close to that concept! I wonder if they will black out that centre console to give the front end a more aggressive look in the F model.
"The diffuser rocks my world, the taillights are much more defined, and I even like the thin chrome trim on the trunk line."  ^ 100% AGREED...   I love the "L" shapes in the tail lights
The front end view is what really sets it apart.......Lower and WIDER! A proper sports sedan I was worried when I saw the concept because it came off as tall and narrow, with big fender gaps Now, it has that crouching tiger stance Nice! BD
As much as I loved the concept,I like the production car even more. As I understand it the 450h in f sport trim will have a front that comes closest to the concept's. This will probably be my favourite GS.
Yeah the production model looks very nice.. It's understated elegance although not as much as LS460..

About the LS 460... It's so hard to choose between the original and the facelifted version! The original has a crisp touch to it while the facelift added more of a classic Lexus elegance.
Yeah I fully agree about the FL LS460, the facelift came as a controversy.. The original design was Definatley much more unique and powerful design theme.. I feel the face lift one was a bit too mainstream design theme..

Practically THE SAME CAR, except few things as the headlights and tailights. I was hoping to see the same thing when I saw for the very first time the CT concept wich was stunning and awesome instead the production version has been changed a lot. I love the CT aniway but the coolest idea of the concept has been lost a bit for a little bit more conventional style although remain,IMHO, the most sexy hatch ever made.
I have already been thinking of ways to deal with the front center bumper in the middle of the grill; I liked the concept full grill idea. It looks as though the F-Sport will have the same grill pattern as the concept so if the bumper doesn't go away  you could: A. Custom mold it. B. After market front bumper kit. C. Wrap with film "black it out" and match to desired look. I will probably do C. PS. BD keep up the good fight at autolies...

Off topic!!  I read that the new camry hybrid have 200hp and 43/39 mpg..That is what they would launch in Europe, and a wagon. Then Lexus would be a very good selling brand. Oh and put that engine in the Ct and new Is too. Keep up the good work Krew!!!

I agree. The Camry's hybrid  system would work very nicely in the GS,IS,CT and the upcoming compact cross-over.

amazing thing!!!!!!!!!!!!!!!!!! love it))))
The production version is a better design in my opinion.
The production version is a better design in my opinion.
Totally agree with your comments krew. The car actually looks very powerful looking head-on in the pictures. I am sure it was much more striking in person at Pebble Beach. I am sure Lexus will have a front grille somewhat similar to the concept model for the F-sport version as the teaser photo showed. Wonder if they will totally black-out the bumper portion in the centre. Of course what ever they do, it will be totally spoilt by the front licence plate. The European plate will actually look nicer than the North American ones because of the slimmer design. And then the Hybrid will have its own unique blue L sign which will make all the models easily recognizable from the front.
The only, and I mean the only thing I would like carried from the concept would be agressive 20" wheels.

Same here. Hopefully those awesome wheels will appear later on the F-Sport or even the F model. Lexus needs to offer more daring wheel designs.

I miss those slits in the body beneath the rear lights on the concept. Dont know what they are for, but remember they was shown in one of the two teaser images before the concept was revealed.
Since the current Camry hybrid moves to 60 in 7.7 (Motor Trend), and the new hybrid system is suppose to be .5 seconds faster (with the Camry's lighter body), this would make the much lighter CT a real performer!  Plus it's EPA numbers should rise to 45MPG! The Camry Hybrid should STILL be the fastest hybrid in it's class, and the new IS and ES hybrids next year should be good performers too! BD
I prefer the concept taillights Apart from that, the GS is pretty good
i don't like its head~
gs coupe please
gs coupe please
I personally love the Lexus logo which seems to light up on the concept.... that would be awesome if that had made it on the production car would look great at night.
this gs looks awesome.. i love it... can not wait for this car to come available at lexus dealerships for sale... i am going to buy a gs 350 awd model when it becomes available for sale.. i am going to get the liquid platinum exterior  with black leather interior with the 800 watt upgrade mark levinson stereo.......   i already have rims picked out that i am going to buy and put on as soon as i get my gs...they will be 20 inch chrome dub spinners with pirelli tires...also i will tint the whole car with black dark limo tint... my car will look like a show car...if your going to do it---you gotta do it write.. see ya in a few months spinning in the streets around 6-7 months from now.. thanks craig mack nine ross...

CHROME DUB SPINNERS ON A LEXUS GS??? OMG, POOR CAR, GIVE IT TO ME.
ha max what rims would you put on the gs? are you buying one of these new gs when they come out.. i already no that i am going to buy either the 2013 gs 350 awd or the gs 450 h  and i will be putting 20 inch chrome dub spinners on my gs.. if you want a gs go buy one max....
gs 450h ya spinning on chrome dub spin 20 inch chrome dub spinnersssssssssssss........
i love this new gs. i do not know why people get on this site and say bad stuff about lexus. i guess they are just haters and probably can not afford a lexus not even a is or ct.....ya they probably drive a  piece of junk... just haters that is what  they are krew...

No wait...the back end remind in me of a Ferrari Testarossa (both have 2 tailights), the front is clearly inspired by a Porsche Carrera GT (two headlights there for both), and in the side is very similar (almost identical) to an ASTON MARTIN LAGONDA (both have the doorhandles).