Next up in the 2012 announcements is the Lexus IS F, which has received yet another suspension update, with stronger stabilizer bars, new bearings and a slightly revised suspension — giving the chassis better low-speed ride quality and less overall body roll. 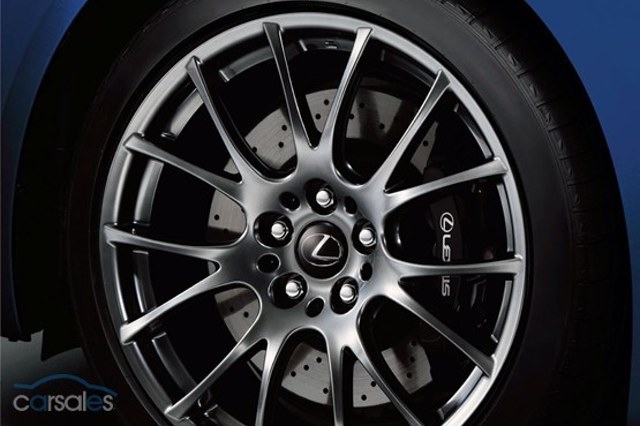 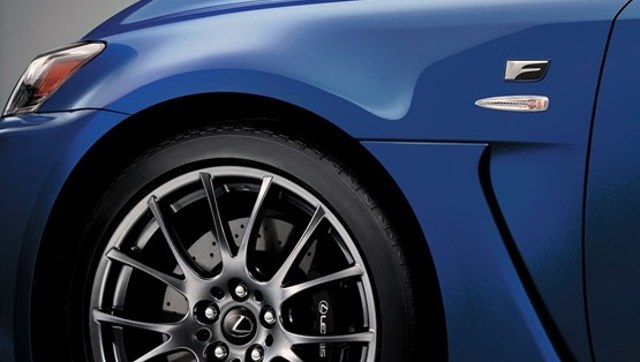 This marks the third update to the IS F in three years — which makes it perhaps the best example of Lexus’ Kaizen commitment to continuous improvement.

Note: So far, only Australia & Europe are confirmed to be getting the new suspension update — I’ll update once I get a definitive answer for North America.

Update: Turns out Europe & the USA will be getting 10-spoke alloy wheels and not 14-spoke, and they look similar to the original IS F design: 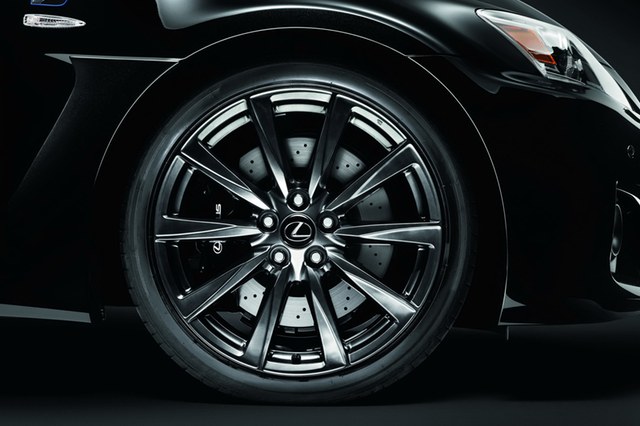 The plate in the front sports the new F-logo! Although it does seem photoshopped...

Zooming in on the logo the edge is not clean showing artifacts not found elsewhere on the black license plate area, so I would think it was added to the overall image as well.
I actually recognize this image, it's definitely a photoshop job.

Good to read they will be further improving the suspension.  I would like to see the interior updated too, with less of a curved center console, replaced with some kind of more modern looking one.  A MPG or two fuel economy improvement would be welcome as well.

I too am thrilled about the further advancing of the suspension----this a good indicator that suspesnion is Akio Toyoda's priority on all future refresh and new generation models.

With this new setup it will definitely be faster than the M3 and C63 on the track!!!!  This might even hang with the LFA!!!

Which is why I had to spend a fair amount of money to have them put in my IS-F!  :
Agreed! I love the mirror signals. Maybe to shed every ounce.

Dont forget about a power bump Lexus. The Next M3 will be turbo and the C63 already has alot of power. The ISF needs to take the lead.  Props on the hanlding upgrade from what I read the 2011 ISF handles like a champ and can out track the C63 and can match the M3. The 2012 has big shoes to fill... forget about the wheel choices the first set of ISF rims on the 2008 model are still the best looking wheels.

In the right hands the IS-F will murder both the current C63 and M3 even the future models. No worries, basically this car is future proof.

Dont forget about a power bump Lexus. The Next M3 will be turbo and the C63 already has alot of power. The ISF needs to take the lead.  Props on the hanlding upgrade from what I read the 2011 ISF handles like a champ and can out track the C63 and can match the M3. The 2012 has big shoes to fill... forget about the wheel choices the first set of ISF rims on the 2008 model are still the best looking wheels.
I would take a LFA over this garbage.
This car will be the fastest on the Nurburing!!!! The only thing faster than this is the GS-F and the LFA probably by a hair of a second!!!!

Probably by hair of a second?? Try a full 1 minute. That is more like 50 car lengths considering LFA crosses the finish line at 293 km/h.  Completely incomparable.  IS-F has tons of other cars with 4 doors that are quicker. Porsche Panamera Turbo, CTS-V, M3 GTS, Boss 302, F10 M5. There is a country mile between the IS-F and Lexus LFA. They are completely in a different league. Completely incomparable. IS-F is a great sedan and does very well in its class now in the 4th year of production, but let's not make this absurd. Lexus LFA's best time is 7:22 and the worst time is 7:38 in different tests. The IS-F ran an 8:18. There is almost a full 1 minute in between the two.
Let me put it this way, the fastest four door cars out today are Porsche Panamera and CTS-V around the Nurburgring. Even with these 4 door sedans being capable of 7:58, they still are turtles compared to the Lexus LFA around the Nurburgring, which according to Lexus Europe has a quickest time of 7:22 and the Nurburgring edition is capable of "under 7:20"
Dude, you need some serious lessons in what a super saloon is, and what a Supercar is, The LFA, is Beyond supercar, it is a RacecaR, backwards and forwards, racecars are extreme, not meant for Fast Families, which is what the IS-F is

When they designed the LFA they took a page from the IS.  Even though the LFA has bespoke parts the design and DNA is from the IS.  When I drive my IS around I'm basically driving an LFA.
No there is nothing common between LFA and IS-F in any shape or form. The designs are apple and oranges.
I see what you did there....... At least I think I do (hope) I assume you are poking fun at the bizarre Motor Trend Review   " This may be one of the downfalls of the LFA as a halo car. It is really tough for a Lexus IS 250 owner to tell his buddies he is basically driving the detuned version of the LFA when they have nothing in common "- some guy from Motor Trend magazine

Finally a GT-R killer I've been waiting for!!!  I hope they updated the launch control, but with this type update I don't think I'll need it.

There is no 4 door that can come close to the Nissan GTR today. Keep dreaming. You are comparing a 4 door sedan to a supercar.  I am being realistic about it when I tell you it cannot even match the Porsche Panamera Turbo's 7:58.  Nissan GTR can only be beaten by an LFA and nothing less. Again, it is a great car, but let's not get carried away with the absurdities here and trying to inject some common sens here.
The GTR isnt a "supercar" Just a really fast sport car IMO.  Its doesa have supercar taste... its just fast and thats all
No one said it was a supercar.  Nissan never claimed it be a supercar.  Quality wise, it's in the league as a Corvette.  Performance wise it has supercar performance.  To say the it can only be beaten by an LFA says something about it.
Exactly. Hit the nail right on the head. The numbers it puts down rival the best exotic supercars today.
Hey guys 2 things 1- Do not compare 2 door cars made of carbon fibre panel to a real world car that has 4 doors. The whole dynamics changes. LFA costs $375K. So lets leave that thing alone. 2- Cars that have superchargers, turbos, NOS, rockets should not be discussed in the same sentence as naturally aspirated engines. So GTR, new S4, new M3 or new M5, Porsche Panamera should not be compared with ISF. Imagine adding a NOS module to ISF and racing it with GTR, or strapping some rockets to the side and doing it, what do you think would happen? 3- Also M3 is 200lbs lighter in weight, 08 M3 to 08 ISF. Most of the weight is from a carbon fibre roof on M3 meaning weight from above the center of gravity and they have better tires on M3, lesser airbags. Still M3 edges slightly on a track. BMW will not extended warranties on M3 if you buy a little used and the car sits in the shop lot more than in your garage and you drive a loner.  Ash
GTR killer?? What are you smoking???

I finally had a chance to sift through the muddled and, at times, contradictory information coming from all over the world on what, precisely, the 2012 IS F changes are. Here's what I came up with: http://my.is/forums/f41/lexus-c-f-2012-including-u-s-pricing-433939/
Any idea when the 2012 IS F will be available for purchase?

I'll try and find out.