This LS 600hL commercial from Lexus Taiwan has a special surprise at the end:

Just in case you missed it: 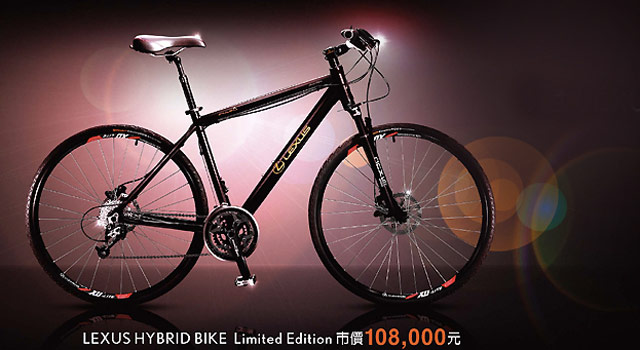 As the Lexus Taiwan website describes, this is a limited edition mountain bike built by Fuji cycles, and will retail for 180,000 元 ($3,300 USD). Expensive indeed, but not out of line with the rest of the Fuji lineup — too bad it wasn’t a production version of the HB Bicycle concept that debuted at the Tokyo Auto Show last year.

nice souvenir If it could take some real pounding, then $3k is alright for a mountain bike. aha the Taiwanese value matches the LS 600h L's value in the US in terms of digits. Does anyone know why Lexus hasn't gotten its LED headlights approved for the LSh in mainland China yet?!
If NT180k a bike , it's cost RM18k in my land . Quite expensive but I think it's ok for a mountain bike .
@WorldofLuxury: So , China's LSh doesn't have LED headlight ? BTW , someone told me the facelifted LSh have less LED inside the headlight , is it true ? That sound cut cost to me !

Edited : It should be 108k , not 180k .
Why doesn't Lexus run more commercials for the LS600hL in the US? I've seen several from Japan, China, Germany, etc. But I've never actually seen one in the US. What's the deal? If anything has a link of a US LSh commercial that would be great.
Sorry for the typo. I meant anyone, not anything.
@James: There was one... sort of... with the introduction of the updated LS line. I myself am disappointed that Lexus doesn't seem to show off its upper scale models anymore. An optimistic thinking is that Lexus feels there could be more to be done, so they don't want to brag about their top-of-the-line models just yet :-D
@James: oh, and there was another one, but the LSh was also part of a crowd; remember that commercial Lexus used to brag about the many miles its hybrid vehicles have traveled?
@WorldofLuxury: Yeah, I guess the LSh has been in a few US commercials, just not any that talk specifically about it though. "Milestones" was about the hybrids in general. And the 2010 "turntables" commercial only showed the LSh for a few seconds and focused mostly on the LS-line as a whole. I guess i'm just waiting to see a commerical only about the LSh. Even though it is low volume, I think that the LSh could help Lexus' prestige even more if they'd adverise it. Have you seen a commercial for the LS Sport yet? I know that "turntables" commerical featured one but I haven't seen a commercial for the LS Sport. :-)
I wish we could go back an edit our comments. Sometimes I realize that I posted the wrong thing can't go back to change it. Oh well. "I haven't seen a commercial for the LS Sport". Sorry, meant to put the word "specifically" in their as well.
Commercials for $100k+ vehicles in the U.S. are uncommon for all makes.

James wrote:I wish we could go back an edit our comments. Sometimes I realize that I posted the wrong thing can’t go back to change it. Oh well. “I haven’t seen a commercial for the LS Sport”. Sorry, meant to put the word “specifically” in their as well.

No commercials on its own yet, but it's been in the one that WoL mentioned and it's also being included in the new F-Sport performance advertising that's just launching this month in U.S. magazines & websites. It's like @Lexus Luver says, this class of vehicle rarely gets advertising outside of its launch & facelift years -- but I also see your point. It's these vehicles that sit at the top of lineup and represent the best of the brand, they should be front and center.
At the end of the advertisement, it mentioned that every new lexus hybrid buyer is given a free lexus limited edition bike. The price on the bike is just to indicate how much worth the gift.