Autocar has published several additional studio photographs of the white Lexus CT 200h. Compared with computer-processed look of the first photos, these are different, and show the exterior lighting: 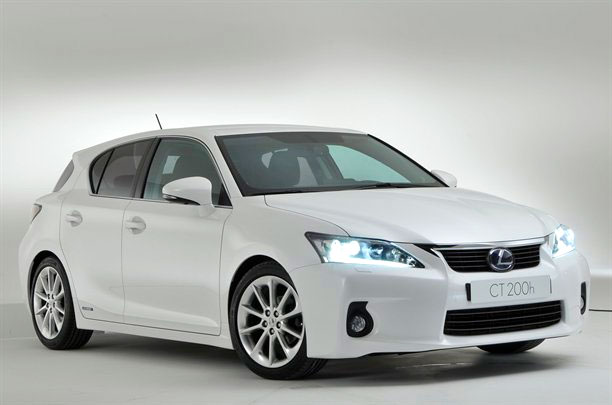 The forward shots showcase the CT 200h’s headlamp illumination, complete with LED strip accents similar to those introduced with the LS 460 refresh. These LED accents appear to continuously flow, although the frontal view contains hints of the dotted LED approach taken by Audi and Mercedes-Benz. The frontal view is also taken from a higher vantage point than this earlier photo, with the angle giving the CT 200h a more IS-like frontal stance and revealing the upswept corners of its headlights. The aft view reveal the LS-inspired rear lights with partial illumination, featuring the familiar L-shaped design accents.

The same photos were posted by Autocar affiliate What Car?, with an accompanying article noting the CT 200h’s emissions credentials:

Lexus’s trump card could well end up being the CT’s impressively low figures for other emissions – particulates, which have been linked with respiratory diseases, and NOx, a contributor to acid rain and climate change.

During the car’s lifetime, the EU will introduce tough new regulations limiting the output of both, and diesels will be able to meet the targets only with expensive filters and chemical treatments. The CT is almost there already.