END_OF_DOCUMENT_TOKEN_TO_BE_REPLACED " /> 2010 Lexus HS 250h Canadian Preview | Lexus Enthusiast
Menu
Log in
Register
You are using an out of date browser. It may not display this or other websites correctly.
You should upgrade or use an alternative browser.

To mark the Canadian release of the Lexus HS 250h, Lexus Canada invited media from across the country to test drive the new hybrid sedan in Winnipeg, Manitoba, one of the most environmentally friendly cities in Canada.

The event took place over two days, where we were blessed with some exceptionally wonderful weather and plenty of time behind the wheel of the HS 250h—but first we started off with a presentation that covered the sedan from top to bottom.

The HS 250h is Lexus’ first dedicated hybrid model, and is positioned between the IS 250 & ES 350 in both size and capability, which is best illustrated by this slide: 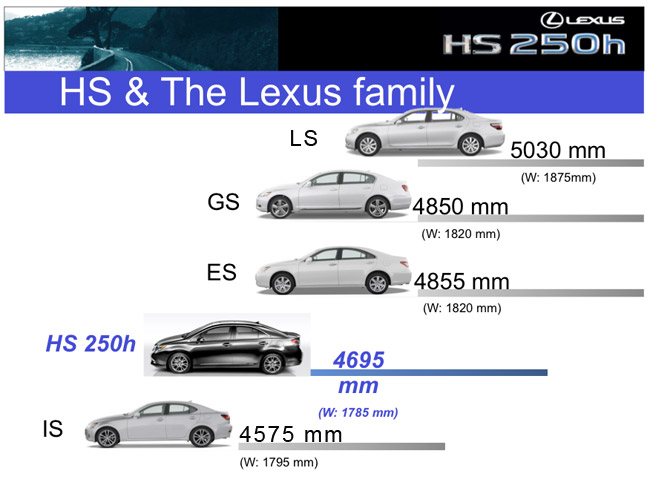 As with the new 2010 RX 450h, the HS 250h utilizes an Atkinson-cycle engine design, which increases fuel efficiency by lengthening the compression stroke. The 1.8L engine generates 147 horsepower on its own, and when combined with the hybrid drive motor, brings the total system horsepower to 187 total, all while emitting 70& fewer emissions that the average new car.

The hybrid system is aided by an Exhaust Heat Recovery System that captures the exhaust gases and uses its contained heat to warm the engine (specifically, the engine coolant). This allows the hybrid system to take control of the engine earlier and more often in the driving cycle, reducing fuel consumption by as much as seven percent during cold Canadian winters.

Along with a continually variable transmission and a co-efficient drag of just 0.27, the HS 250h is estimated to deliver a combined fuel consumption rating of 5.7 litres per 100km (5.6 / 5.9 L/100km, city/highway), making it by far the most fuel efficient model in the Lexus lineup. 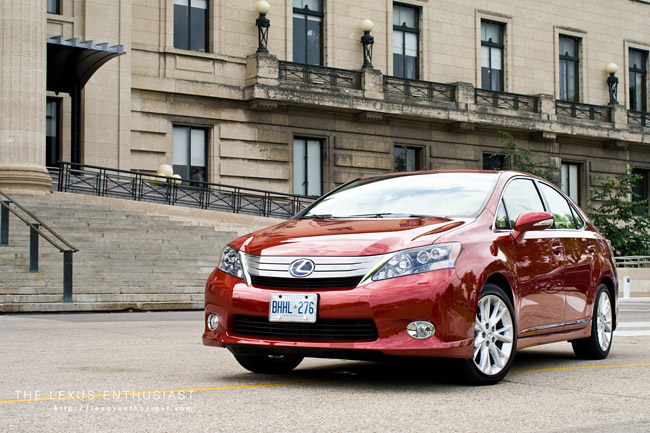 The very first vehicle of the day was a Matador Red Mica HS with the Sports package and a Water Grey & Black interior. Equipped with a sports-tuned suspension, 18” aluminum alloy wheels and sports pedals, the HS “Sport” gave a very good impersonation of the IS 250’s driving characteristics, which has its good and bad points. The handling was a definite upgrade over the standard HS, with a nicely-balanced weight to the steering that adds some character to the driving experience. This was surprising given that the HS is equipped with fully electric power steering rather than the traditional mechanical pump—Lexus did a very good job giving the system a very natural feel.

All HS’ feature four driving modes: Power, Eco, Normal and EV (electric only). I had difficulty telling the difference between Power & Normal mode, to be honest, but the Eco mode is quite noticeable in the way it limits the throttle in order to maximize fuel economy. The mode is close-to-frustrating, as it bites directly into your acceleration, but it’s a perfect feature for maximizing MPG.

The tradeoff with the improved handling is perhaps too much road feel, which became distracting on rougher roads. Also, the sportier ride had an effect on gas mileage, especially when my co-pilot (Jeff Melnychuk from Wheelbase Communications) did most of his driving in the HSh’s Sport mode setting. The result? In our first leg, covering just under 200kms, we returned a fuel consumption of 8.6 L/100km. Ouch. 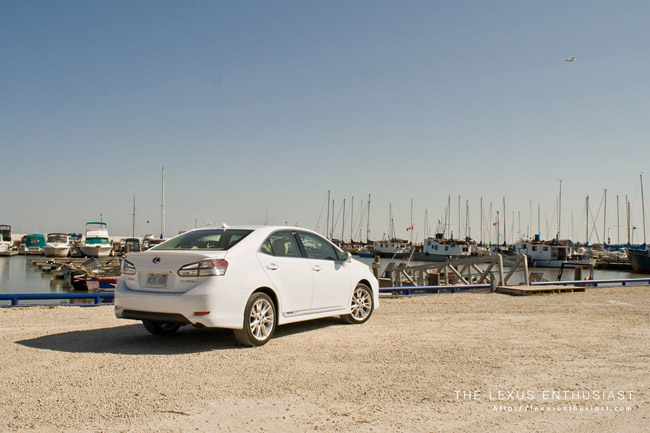 After spending much of the morning with the Sport package, there was a noticeable difference jumping into the HSh Ultra Premium. If the ride quality with the Sports package was comparable to the IS 250, then the standard HS was very much like the ES 350. The handling was less responsive than the Sports package, but even so, it had a solid feel that never felt sloppy. More importantly, the suspension was much smoother and much preferable.

Along with the more relaxing ride, the HS 250h Ultra Premium was equipped with LED headlights, Remote Touch, voice-activated navigation and a 15-speaker Mark Levinson sound system, all of which added up to elegant and composed driving experience much more in line with my expectations.

The last HS 250h of the day was a base Premium, which at $39,900 is $8,850 less than the Ultra Premium. This cost savings does come at a price, though, as it removes many of the vehicle’s best features (especially Remote Touch & Navigation). Even so, the HS 250h interior is nicely appointed—in fact, the iPod integration of the standard radio is much more usable than Remote Touch and its clunky scrolling.

While there may be some lingering uncertainty as to how the HS 250h will sell in the USA, I have very little doubt that the hybrid sedan will perform exceptionally well in Canada. One of the points that was stressed during the event, and perhaps the most indicative of Lexus’ expectation of the HS 250h in Canada, is this:

“Our research tells us that more than 60 per cent of those shopping in the entry luxury segment have been looking for a hybrid-powered option, and starting under $40,000, the 2010 Lexus HS 250h is the vehicle for these Canadians,” said Larry Hutchinson, Director of Lexus in Canada.

In fact, there may only be two things that will affect sales: inventory & package selection. With HS 250h’s early success in Japan and the sheer size of the American market, there may not be enough units to go around. On top of that, there are no singular options, no picking and choosing of options, and the jump from Premium to Ultra Premium is significant.

In the first year, though, this is unlikely to matter much, as the Ultra Premium model is expected to make up the bulk of initial orders. This should give Lexus Canada some time to work out more flexible options for 2011, at which point, I think the HS 250h will be well-positioned to make a real impact in the Canadian market.

(My very sincere thanks to everyone at Lexus Canada for their hospitality, and to Jeff Melnychuk for his headache-inducing music selection.)