END_OF_DOCUMENT_TOKEN_TO_BE_REPLACED " /> Spending Time with the 2010 Lexus HS 250h | Lexus Enthusiast
Menu
Log in
Register
You are using an out of date browser. It may not display this or other websites correctly.
You should upgrade or use an alternative browser.

Recently, I had a chance to get a quick look at a Lexus HS 250h prototype that was being used to develop dealership training materials by the people at Lexus Canada.  Glenn Alkema of the Lexus Academy was nice enough to give me a tour of the new hybrid, which will be introduced here in Canada some time in late September.

I’ve been posting about the HS for nine months now, and had seen it at Toronto Auto Show earlier in the year, but it’s the same old story, you can never really get a feel for an automobile until you’ve seen it out in the wild. Viewing the HS 250h up close reveals plenty of luxury car detail, particularly in the paintwork.

Because of the exterior shape, it’s very difficult to get an idea of its size,  so I was very interested to see it beside another car to provide some context for everyone: 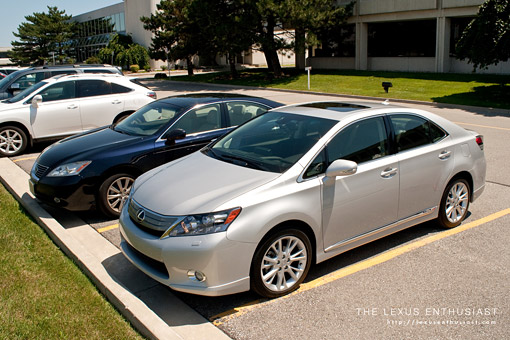 It’s surprising how the HS 250h interior feels much like sitting in an office, right down to the Remote Touch “mouse” and the LCD monitor: 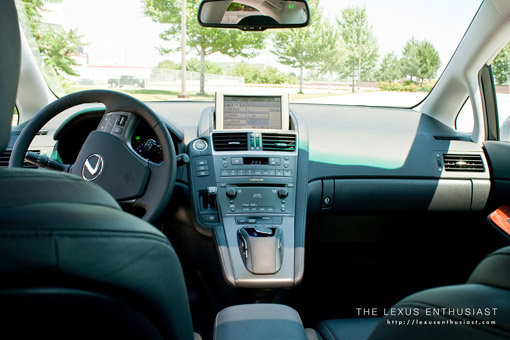 Everything feels very logically laid out and gives a very solid impression, and while some of the materials in the prototype were obviously unfinished, the finish is modern and comfortable.

Being a prototype, the driving opportunity was limited, but I did manage to get a few minutes in the driver’s seat. The thing that struck me most was the available power, acceleration was brisk and felt stronger than the IS 250 AWD. Even after reading otherwise, I expected the ride to be floaty with considerable body roll, but that wasn’t the case at all. The other thing that impressed me was the difference when playing with the Eco & Power modes — both settings had a pronounced effect on the vehicle’s performance, more so than I’ve found in other vehicles. As with the 2010 RX, the shift from gas-to-electric engines is imperceivable.

The biggest revelation, though, was that the HS 250h looks and feels every bit a Lexus in person. The HS 250h may not be a particularly stylish car, but it’s extremely focused in delivering a particular experience. More than anything, Lexus’ latest hybrid sedan is “professional” — which is perhaps the clearest way to describe it.

I’ll be looking at the HS in more detail over the next couple weeks, but for now, here’s a small photo gallery: