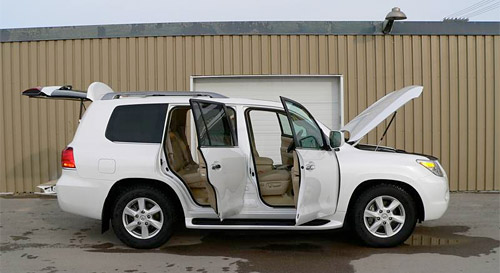 As part of their recurring Inside Story feature, Canadian Driver took a look at the Lexus LX 570’s interior, and it’s a fully detailed breakdown of the SUV’s internals.

While extremely positive for the most part, the article is bookended by some unfortunate badge engineering rants:

Before you start shouting, “well-heeled Sequoia,” there are a few subtle differences, such as shorter length and weight than the Toyota version, creature comforts, ride dampening, and whether or not a red-vested valet will be expecting a fiver to keep an eye on it. Is the LX worth the price equivalent of a new Camry over the top-line Sequoia?

Can such a beast ever be considered practical? Inside Story says ‘Slightly Maybe’, if your passenger complement is in the neighbourhood of eight, your home is located 10 miles off the beaten path, and you tow very large things for a living. If this be your dilemma, a Limited or Platinum edition of the Sequoia makes for a ‘Yes’ in the fiscal responsibility department.

I hate to point fingers, as I make my fair share of mistakes, but any negative facts should be triple-checked before being published. The LX 570 isn’t based on the Sequoia, but the Land Cruiser. Too bad, really, the rest of the article is well-researched and informative.