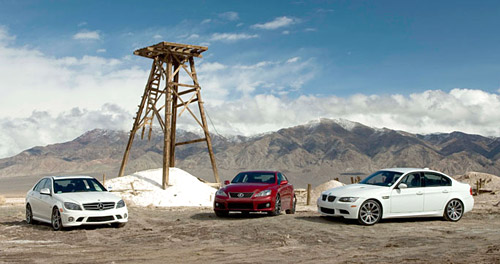 The Lexus IS-F comparison tests keep pouring in, this time from Motor Trend, who pits the new super-sedan against its primary competitors, the BMW M3 and the Mercedes C63. Here’s some selected highlights:

Steering feedback and response are everything in a car like this…The C63’s turn-in is crisp, with plenty of honest feedback and a meaty feel. Lexus equips the IS F with electric power steering, which isn’t as organic as a good hydraulic system. It’s fine for normal to moderate driving, but loses sensitivity when you’re really honking it. The IS F’s cornering abilities are impressive, but the car understeers heavily at the limit, and the wheel feels disconnected at that point. The BMW’s tiller is about as quick as the others but a bit lighter. Its communication is even clearer than the C63’s, with plenty of true road feel.

Kim Reynolds says, “The Lexus and the Mercedes feel like performance versions created out of something else. The M3 feels like it was born this way.” Ed Loh’s summary is even more succinct: “The Lexus and Mercedes are great hot-rod sedans. The M3 is a race car with four doors.”

Lexus is new to this game, yet has delivered a fast, edgy, credible piece from a company most known for quiet and beautifully crafted, if uninvolving, luxury sedans. A couple of clunky design elements let it down, and its steering and suspension calibrations aren’t as well synthesized at the limit as the others. As the IS F costs no less than the German duo, there’s no value card to be thrown. But we’re picking nits, and we know the brand’s next effort will be fully class-competitive.

Predictably, the IS-F came in last, not all that surprising considering the other competitors’ performance-brand history, not to mention how fantastic both these new versions of the M3 and C63 are.

As the article is quick to point out, this is only Lexus’ first effort in the super-sedan category, and there’s significant tuning and improvements that will need to be made.