END_OF_DOCUMENT_TOKEN_TO_BE_REPLACED " /> How Much Horsepower will the Lexus IS-F Have? | Lexus Enthusiast
Menu
Log in
Register 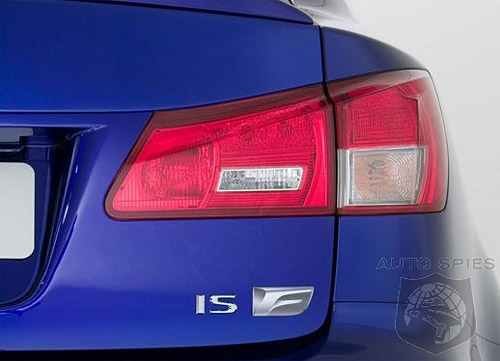 There’s a survey over at Autospies right now asking: How much horsepower with the new IS-F debut with?

As of this writing, the leading guess is 440bhp to 450bhp with 23% of the votes, but what I found more interesting than the survey is the write up that accompanies it:

A few months ago Car and Driver reported that the 5L V8 had made as much as 483 hp in an (at the time) IS 500 mule. In April Road & Track also ran an article about future Japanese sports cars, where it said that Toyota was developing a new Supra and Lexus IS 500. Both would be powered by the same 5 liter V-8 putting out 450 hp and 383 lb-ft of torque in the Supra and detuned slightly for the IS 500 (IS-F). So many sources seem to indicate that Lexus may lead both the RS4 and the M3 and slightly trail the Mercedes-Benz C63 AMG in overall horsepower.