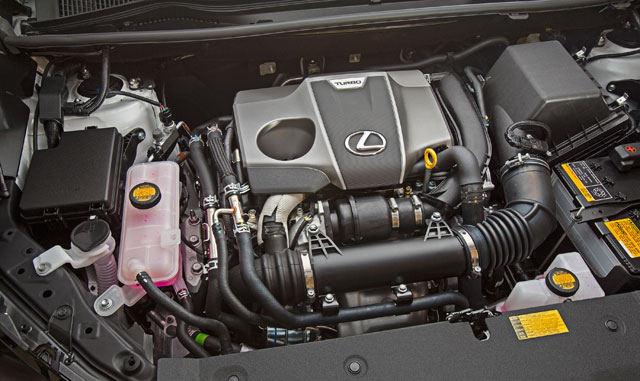 Auto Week has some finer detail on Lexus NX 200t and its Lexus-first turbocharged engine:

The NX 200t will feature Lexus’ first turbo engine, a 2.0-liter four with VVT-iW. Yes, that W is new. It signifies advance and retard of the intake cam. At low loads and rpm it can operate as an Atkinson cycle engine for greater efficiency and lower pumping losses. At higher engine speeds and greater loads it switches to the more standard Otto cycle…

The turbo is a twin-scroll for even more efficiency while the intercooler is an air-to-water-to-air unit. Output is said to be “over 200 hp.” It will be mated to a six-speed ECT automatic transmission which has been engineered for smooth transfer of power and seamless, linear acceleration, according to Lexus.

The dual Atkinson/Otto cycle of the NX 200t is the very same technique being used with the new RC F 5.0L V8 engine — it makes for an interesting balance in boosting fuel economy without sacrificing performance.

Considering the NX’s other North American powertrain is the same 2.5L hybrid engine used in the 200 hp ES 300h, how much horsepower should we expect in this Lexus-first turbo engine? 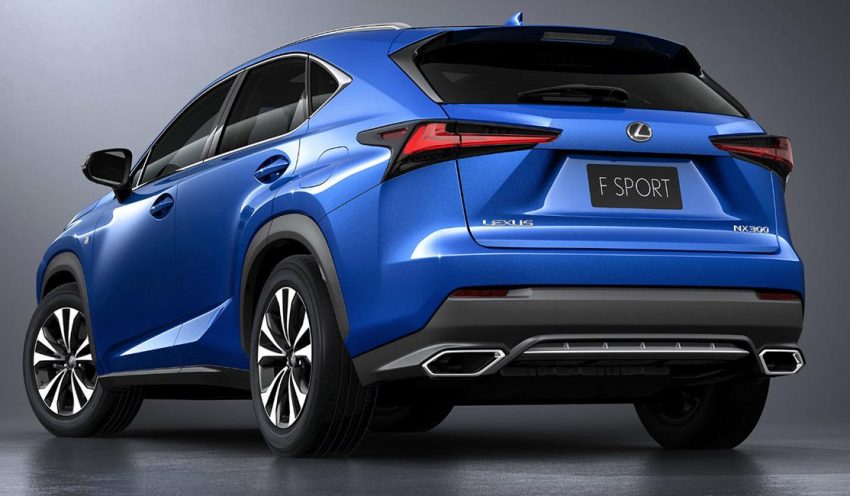 Around 240hp/240lbft should be a nice number

I think you you are right on the money with those numbers. :)

not sure 300h will be same as ES... for instance, AWD version will have additional rear motor... and do we know about D-4S?

Good point -- the above Autoweek article mentions the hybrid's horsepower, saying that "Total system horsepower for the hybrid will be “comparable to the ES 300h,” which is to say, about 200 hp." That's where I got the ES number.
yep, i got that later on... who knows about AW.
I expect the Camry Hybrid to see some changes, at least in fuel economy, at Wednesday's reveal at the New York Auto Show. Power may not change much, but I expect to see around 10% more efficiency, and I expect to see any upgrades there to join the NX at launch, and the ES300h later this year, for it's 2015 model year change..... BD

It should be around 243-245 ps, that figure makes sense.
300 PS.
I guess 240hp should be ideal.
Considering the fact lesser names like Hyundai are pulling 260+ HP out of 2.0T, and the BMW 3-series shows 240 HP (but is probably underrated by 20 HP), I'd expect something in the 250-260 HP range. They don't want to over-cook it for CAFE considerations, but it needs more than BMW shows to win new, younger buyers. And it will help replace older engines like the Camry/ES350 V6 engine. I'm sure they're benchmarking the Toyota 3.5L V6 for power, acceleration, and smoothness. You'll be hard pressed to find a better benchmark in this range. I'd expect fuel economy similar to what the Hyundai offers (22/35/28 MPG combined) BD
Maybe just maybe, they will have 2 tunes. a slightly above 200hp and late 200hp. As lexus prioritizes refinement and efficiency, i think at 210hp would be reasonably smooth. with 240lbft of torque boosting too much will also reduce reliability and increase turbo-lag, which is not something lexus would want as well.

Toyota could use the lower one for Toyota vehicles like the Camry and Rav4. And the higher one for Lexus vehicles like the NX and IS. The Camry reveal this week in New York will answer some of these issues.... BD
I have same opinion. Something between 201-219 is real number. I do not think there is need for higher power with 2.0 litre engine. This engine will be in RC too… /later.

Sounds like an awful lot to ask out of a 2.0, especially with Lexus being so known for reliability. But it's possible. They need to get away from the 3.5L V6, and that would solve that problem. You would think an engine that small would have to work very hard to make that much power, and it would hurt fuel economy, and NVH. For that much power, a 2.4L or 2.5L turbo would give a better balance of fuel efficiency and displacement, without worries of long-term stress issues. Again, the Camry reveal Wednesday will tell us a lot about where Toyota/Lexus plans to go with engines..... BD
As I said. Engines in Camry stay the same.
See my post above. 300 PS. The FI 2.0l I4 is to replace the NA 3.5l V6. @BD: Toyota has experience with building reliable engines, NA or FI, that is why I don't want to see a BMW engine. Who knows how long they were working on this engine, but the rumors of new turbocharged engines are more than 3 years old. They had all their time for building making them, while keeping the 2.4l I4 and 3.5l V6 so as V8.

It will be about 2017 or so before a turbo engine gets anywhere near a Camry. I think the Camry isn't getting any new engines. Just a new front grille and alcantara cladding for the doors. As for the horsepowers of the new 2.0, i think it will be at about 205 hp. I am reading "more than the old, more than this, more than that" news out of Toyota city for a decade now. And "more than" was always like only two or three hp more. So is will be 205hp. And for the reliability: A turbo engine will always be slightly less reliable than a NA, no matter how good you are at building engines. --> Something that isn't there can't be broken!
Very nice post! But there is no way, how 2.0 liter 205 hp turbo engine can replace 3.5 V6. Will be this 2.0 engine in GS, IS too?